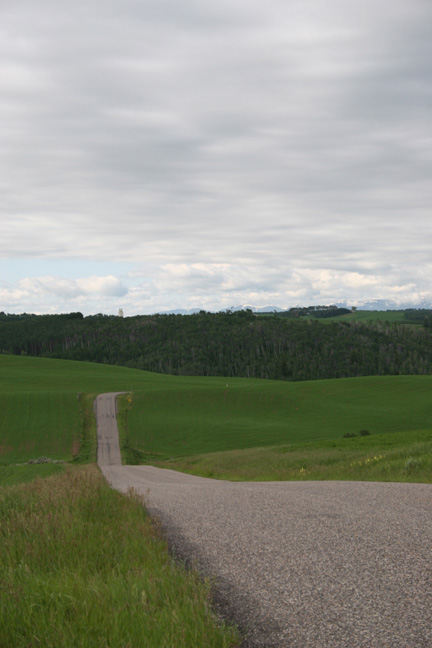 Oh well, regardless, in a twist on its title, in Michigan they could soon be singing, "Don't it make my blue roads green?" That's because, according to an October 10, 2009, story in TIME magazine, a woman named Kim Gallagher is lobbying to have the state's narrow, forgotten "blue roads" turned into slow-ways (speed limit of 35 mph) for those traveling by bicycles, electric cars, horses, scooters, and so forth. Eventually, electric-car charging stations would be situated along these green highways, which in some cases could bring life back to dusty towns that've seen better days.

It's a fascinating idea, but I think it's going to be a tough sell to the locals who are accustomed to driving these roads, as well as to highway engineers, who would have to think waaaay outside the box. Already in Iowa there was a movement to ban bicycles from the state's farm-to-market roads, which often are narrow, low-traffic roads, much like the ribbons of pavement Gallagher talks about in Michigan. Might a relatively radical idea such as hers spawn similar petitions in other states as a way of motorists "fighting back"?

Not that I personally wouldn't like to see it happen; in fact, I think it would be great. But I just don't know ...

What about you — do you think it's a good and/or viable idea?

And really, except for lowering the speed limits, isn't this precisely what Bikecentennial/Adventure Cycling has been doing for almost 35 years — finding and mapping the blue highways of America?