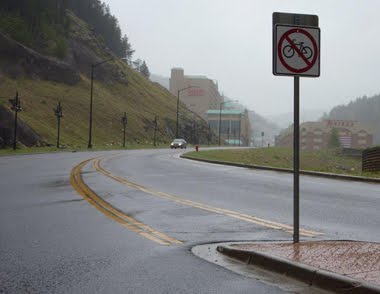 In June 2010, we reported that Black Hawk, Colorado was banning bicycling on most roads in town, citing safety concerns. The ban includes the roads we use on the Great Parks South Section 1 route map State Highway 119 and County Road 279.

Since then, three cyclists were ticketed for riding their bikes in town. Instead of paying the fine, they have been fighting the tickets through the legal system. Both the city and county courts have upheld the law.

Now, Bicycle Colorado the statewide cycling advocacy group challenging the ban has announced that the fight to secure the rights of cyclists to fair access to roads is being taken to the Colorado Supreme Court. “With the inaugural USA Pro Cycling Challenge soon being broadcast nationally and around the world showcasing Colorado as a tourist destination a ‘no bikes’ sign is not the impression we want to leave with potential visitors,” said Dan Grunig, executive director of Bicycle Colorado, in a recent news release.

We support Bicycle Colorado's efforts and encourage you to do the same. We'll be watching closely to see what happens next.