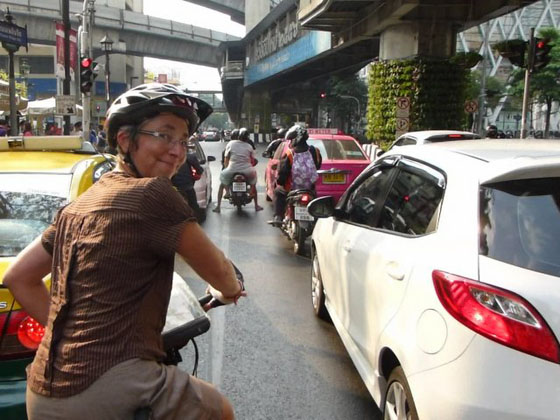 Kat and I first encountered Bangkok traffic from the perspective of the backseat of a taxi. The chaos of any big city can be daunting. Though neither of us spoke the words, I know we were both thinking, "Not going to bike here." But over years of travel, both of us have learned that first impressions are often wrong.

Yes, Bangkok is loud and crazy. But one of the advantages of a crowded city is that traffic speeds are relatively slow. After conquering our initial fears, we found that if we were hyper-aware, predictable, bold, and took the lane, the city streets were fairly easy to navigate.

The video shows us pedaling underneath and alongside Bangkok's BTS Skytrain. It is quite the rush to be part of the rush, rather than observing it from the sidewalk. If you are planning a visit to Bangkok, it is wise to find a hotel/guesthouse near one of the Skytrain stations. You can even take your bike on Skytrain. Although I'll warn you not to try this during rush hour when the trains are completely packed. And if you are going to bike your way out of the city, I'd highly recommend doing it early Sunday morning.

Bangkok will probably never be included on the list of top bike-friendly cities, but we've grown to love it nonetheless. Although I have to admit, that given the choice of routes, I'd take Mai Rut over Bangkok any day.

SIGHTS AND SOUNDS is posted every other Friday. Willie Weir is a columnist for Adventure Cyclist magazine. His latest book Travels with Willie: Adventure Cyclist will inspire you to hit the road and just might change the way you approach bicycle travel. He lives in Seattle with his wife Kat. You can read about their adventures at http://yellowtentadventures.com/.

Bangkok can be Hate or Love. Not much in between and this is even more so for cyclists in Bangkok. Over the years it has improved or even since the above article was written. Sukhumvit is just horrible to cycle unless you head over the river into the Green Lungs or Bangkok's Jungle.

Closer to the river towards Sathon is where it is starting to get more interesting cycling around. Its pretty amazing what is out there hidden from the main roads.

I myself have been cycling for over 18 years in Bangkok and are lucky to have made a job out of my hobby.

Should you ever feel like exploring Bangkok a bit better please join me.

Sorry: www.gobangkoktours.com to join me. Thanks for the great article and hopefuly till soon!