Bikes of Adventure Cycling: Part I

All throughout the summer months we see traveling cyclists riding some pretty cool bikes when stopping by our office. While each bike is unique, all riders have a similar level of appreciation and attachment to their ride. The Adventure Cycling staff is no different, and as we wait for the masses of travelling cyclists to descend upon us, here's a spotlight of a few staff bikes that grace our courtyard yearlong. 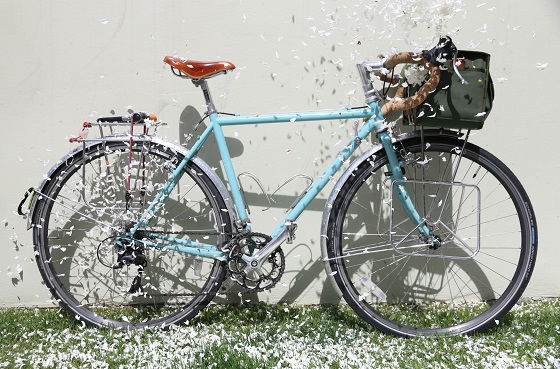 Meet Juniper, or Junip for short. She's a 2011 Surly Cross Check in robins-egg blue. The bike has had plenty of modifications over the past three years, with Alison most proud of her Velo Orange hammered fenders, Grand Cru headbadge, mock-quill VO tall-stack stem, and Brooks saddle. Here's her account of how she landed on this particular bike and build:

"I read something about choosing the right touring bicycle that said basically, "above all, make sure you like what your bike looks like, because you're going to be staring at it a lot." After drooling over the LovelyBicycle blog for about two years, I spent some time finding pretty, but still affordable components, mostly through Velo Orange, that made my bike look more like a classy, retro bike. I think I actually ended up making my bike weigh more, but with her robins-egg blue paint, shiny silver accessories, brooks seat with copper rivets and her matching shiny copper bell, Junip is one classy girl."

Between commutes and rides, Alison has logged a huge amount of miles on Junip, and she's still going strong. 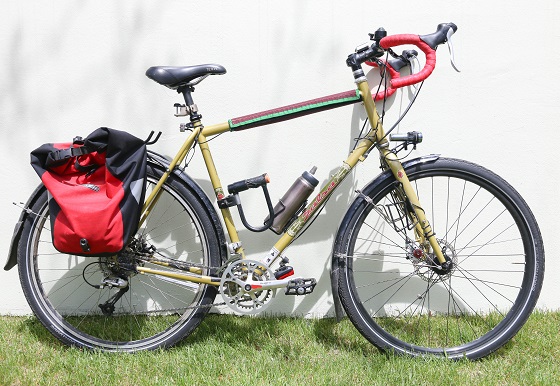 There are maybe four or five Salsa Fargo's floating around the Adventure Cycling office, but none as decked out as the Fargo owned by our sales lead, Patrick Finley. Purchased as a frameset and built from the ground up, Patrick chose to outfit this bike with a 3x9 Shimano drivetrain sporting a Sugino crankset, Deore rear derailleur, and STI levers. Some key features include Nitto handlebars, Supernova front and rear lights, tubus rear rack, and custom Black Star Bags top tube pad. Patrick is the best mechanic we've got on staff, and you'll be hard pressed to ever find a rattle or creak coming from his bike. 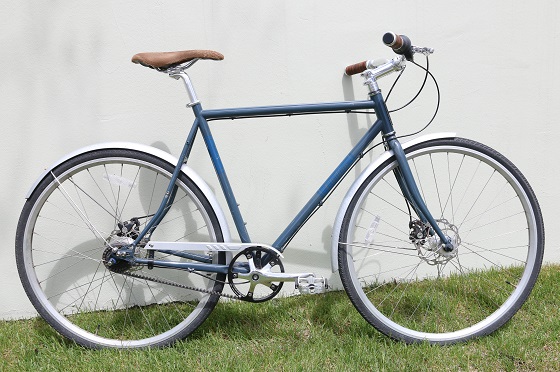 When it comes to buidling a large stable of bikes, our publications assitant Alex Strickland has a fortunate advantage over most of us; both he and his wife ride the same frame size. Who claims ownership of the Civilian Corduroy Rebel, his daily commuter, may be up for debate, but there's no question that it's about as practical as they come for city riding. Keeping Alex clean throughout the spring and winter are full metal fenders and chainguard. The key features to hone in on are the Gates belt drive and Shimano Alfine 8-speed internal geared hub. Some other nice touches are disc brakes and 700 x 28 tires, all aboard a steel frameset.

Won't you go around the history in Istanbul's historical peninsula by 21 speed cycle w. radio guidance?

I've found that the best way to remove the decals on a Surly frame (or any other frame which has decals over the clearcoat) is to warm them up with a hairdryer first and gently scrape them off with a piece of plastic. Any excess adhesive left behind on the tubes can then be removed with isopropyl alcohol or similar after it has cooled off a bit.

It's a bit time-intensive and fiddly, but it works - a similar process is described on the Surly website.

How did Alison get the decals off her Surly so cleanly?

Kevin, the decals actually started chipping off on their own. They come off pretty easily by pushing them with your thumbnail or the edge of a credit card.

Nice! Thought somebody stole my Panasonic when I saw that blue trucker: http://www.pedalingnowhere.com/gear/renovating-a-vintage-touring-bike/

I love Patricks Fargo. It has that bug out bike quality.