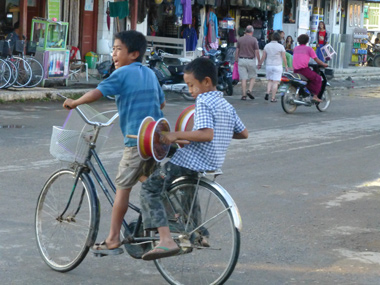 There are two items that represent the joy of childhood to me: bikes and kites. Riding a bike was easy for me. Flying a kite ... not so much.

Watching the kids in Myanmar fly their kites with an ease I've never known, I suppose my mistake was always going for the largest kite at the store--bigger was better. Except that no matter how fast I ran, my kite would get about 50 feet off the ground, start doing pinwheels, suddenly nose dive, and crash with a fatal thud. 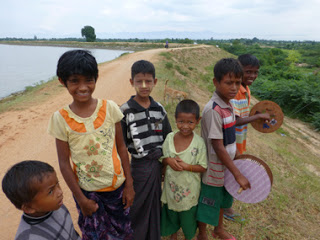 Many kids in rural Myanmar can only dream of owning a bike. But a kite is within reach.

The cheapest kites are small and made of the same the light plastic as grocery bags. A puff of wind sends them into the sky. You see them in kite shops with cartoon characters printed on them, or the ever popular Angry Birds. Hanging next to them are fat wooden spools. That's an item we didn't have as kids. We always rolled our string around sticks. But a large spool allows for rapid string deployment, with less chance of the dreaded knotted string mess. 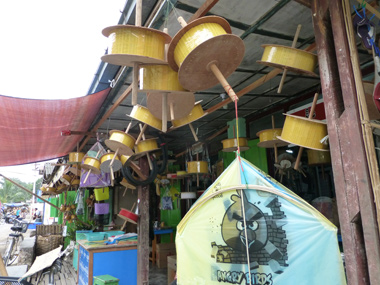 As we pedaled along back roads, we often came upon groups of kids tugging and manipulating their spools of string to get their kites to do acrobatics against the deep blue sky. There was always laughter and smiles.

Bikes and kites: self propelled motion and flight. The stuff of dreams. 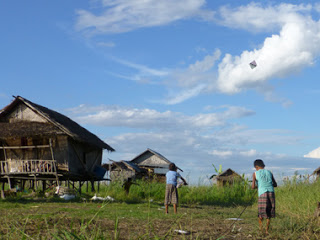 SIGHTS AND SOUNDS is posted every other Friday. Willie Weir is a columnist for Adventure Cyclist magazine. His latest book Travels with Willie: Adventure Cyclist will inspire you to hit the road and just might change the way you approach bicycle travel. He lives in Seattle with his wife Kat. You can read about their adventures at http://yellowtentadventures.com/.

Where to purchase pedaling kite?

Thanks for the post. I think we need to provide more opportunities for children in the third world countries to enjoy things such as bike riding. This blog proves exactly why and I hope that soon we will be seeing all disadvantaged children enjoy the thrill of bike riding.