Bike Touring During Pregnancy: Yes, You Can!

During our bike tours, people have often quipped, "Great that you're doing this trip before you have kids!" -- as if children would put a definite and immediate end to our love of cycling and traveling by bicycle.

When I became pregnant in May 2011, I wondered if they were right. Would a growing belly (let alone the arrival of a new human being) put a quick end to my bike touring days? So far, I'm pleased to say the answer is definitely been 'no.'

On the contrary, cycling has been my key to sanity. At a time when I find it difficult to walk long distances or climb stairs, I've been able to ride my bike easily. It's kept me mobile and fit, and I find the bike supports my weight and body very nicely.

In addition to daily commuting, the 'bump' and I have gone on several short trips, including a beer-tasting tour of Belgium (I tasted chocolate and waffles instead) and a weekend trip around the Dutch island of Texel. Even now -- three weeks before the baby is due -- I'm still happily cycling, and my husband and I went on an S240 (sub-24-hour overnight) a week ago.

Here are three bike touring tips for other mothers-to-be.

1. Slow Down the PaceIt's definitely possible to cycle right to the end of your pregnancy, but don't expect to have the same level of energy as before. The daily distance you can cover will steadily decrease as the months progress. Before I became pregnant, I could happily cycle 80 to 100 kilometers a day. Now, I'm much more comfortable with 30 to 40 kilometers, and only in good weather. I don't want to risk falling on a wet, slippery road. I also bike at a slower pace, perhaps 20 to 30 percent below my pre-pregnancy speed, and I will walk up a hill if necessary. The bottom line? Listen to your body and don't push yourself too hard. 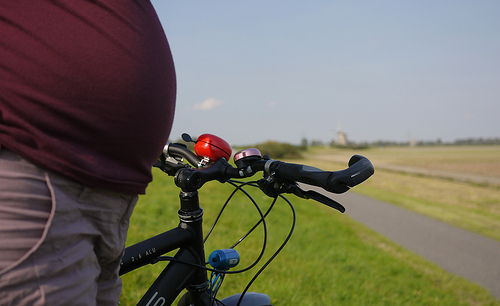 2. Food & Water are More Important than Ever

Every bike tourist knows how important it is to stay well fed and hydrated during a tour. That rule applies doubly to the pregnant woman. I found that I felt pangs of hunger and thirst much more keenly while pregnant, and the idea of holding on 'just a few more minutes' to the next rest stop wasn't an option. Make sure you always have some fresh fruit, nuts, or your favorite snack food on hand, as well as a full bottle of water.

3. Adjust Your Bike as the Belly Grows

When my belly really started to pop out, after about six months, I found I couldn't ride my touring bike in its normal setup. The bent-over position was no longer comfortable. We raised the stem so that I had a more upright position, which allowed me to keep using my touring bike for a few more weeks. In the last two months of pregnancy, the most comfortable bike has turned out to be a Brompton folding bike. Its small frame size means I can easily lift my leg over the top tube. The bonus of a Brompton is that you can also put it on public transport if needed, in case you're tired or the weather turns foul.

Photo: Friedel and her 'bump' on tour. By Friedel Grant, TravellingTwo.com

FRIEDEL GRANT launched into bike touring with a tour around the world with her husband. They pedaled 48,000 kilometers through 30 countries before settling down to ride bikes in The Netherlands. Friedel writes about bike touring on her website, Travelling Two, has published the Bike Touring Survival Guide and written a chapter for the Adventure Cycle-Touring Handbook.

When I was pregnant years ago,(I now have teenagers) I lifted the handlebars about 4 inches overall on my mountain bike and rode until that day my water broke. However, I stopped riding off road after about 6 months. My balance changed enough to where I was not comfortable anymore on uneven or technical terrain. That said, listen to your body.

I'm glad to learn that other women are/have been cycling during pregnancy.

When my wife was pregnant she continued to ride, but worried about overexerting herself in the high-altitude mountains near our house. She solved that issue by wearing a heart monitor and keeping her heart rate in the range recommended by our doctor.

Along the same vein, check out an article I wrote for Momentum Mag: http://momentumplanet.com/articles/biking-with-a-belly