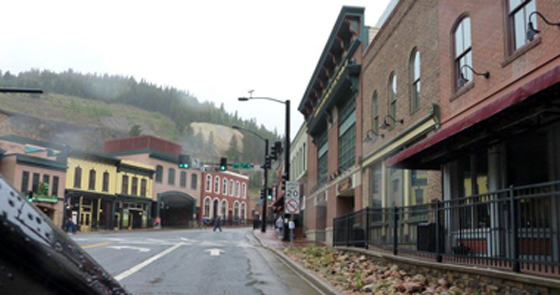 The story of bicycling being banned in the small town of Black Hawk, Colorado, has gained some steam. It's important to note the specific impacts in terms of cyclists using our Great Parks South Route, Section 1.

Cyclists riding this route have two options to avoid a $68 ticket for riding through Black Hawk:

Although SR 119 continues south and east of Black Hawk to an intersection with US 6, there are tunnels in EITHER DIRECTION that are prohibited for bicycle traffic, making it essentially a dead end for cyclists. There are no paved alternatives for cyclists south of Black Hawk on SR 119. 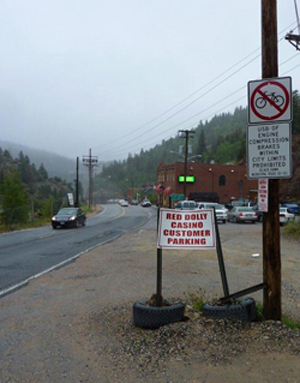 We are fortunate to have a volunteer who lives in Colorado within an hour of Black Hawk. Upon hearing of the circumstances, he voluntarily hit the road to see it for himself. What he discovered is that the actual distance a cyclist would be required to walk their bike through Black Hawk is closer to 0.5 mi. (we originally reported it to be 1.5 miles) There are no sidewalks or shoulders for about half of the distance.

While in town, he also looked into another road now closed to cyclists that we were informed of through the process of reporting on the ban. Central City Parkway, on the same Great Parks South map panel #7 (detail below) is closed from Nevadaville Rd. to Virginia Canyon Rd., necessitating a detour. His suggested reroute is as follows:

Leaving Central City (Southbound narrative on our map): There is an X shaped intersection at Nevada Street (the main street) and Spring Street. Take the LEFT fork, Spring Street, and begin climbing. Follow Spring to Roworth to Virginia Canyon Rd and climb to the overpass over the Central City Pkwy. Cross the Parkway, and take an immediate left into the gravel parking lot for a road service facility. Follow this frontage road for about 0.25 mi. and enter the shoulder of the Parkway.

En route to Central City (Northbound narrative on our map): There is a short gravel path that leaves the Central City Parkway and puts you on the frontage road just before Virginia Canyon Road crosses the highway on an overpass. There is no vehicle exit here, just the small gravel path (and a big sign saying bikes exit here). Follow Virginia Canyon Road downhill until it turns into Spring Street and intersects with Nevada Street.

Riding Conditions Note: The grade on Virginia Canyon Road is up to 12% in places. 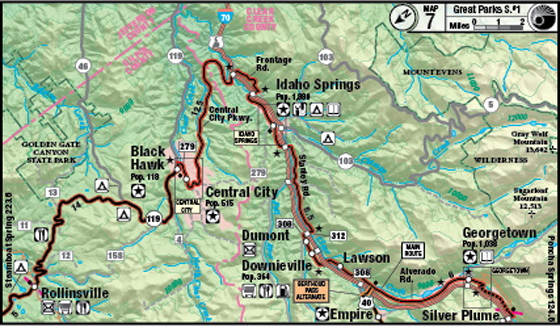 Since posting our original road closure notice, coverage of the Black Hawk ban has expanded, been updated, and sites to show your support have grown:

We continue to encourage you to support Bicycle Colorado in their bid to overturn the ban via legal and legislative means. If this ban is allowed to stand, a precedent will be set with statewide ramifications that we'd rather not think about.

Top photo: In Black Hawk at intersection of Gregory St. and Main St.

Any updates on this predicament? I plan to ride through Black Hawk soon and even though it seems to just be 0.5mi of a much longer journey, what is the current (07/2019) law?

I'd advise cyclists who wish to protest this to walk through Black Hawk, taking the lane where there is no sidewalk, and boycott town businesses.

In light of what is happening in Wisconsin where many communities have been working to establish "complete streets" and to educate drivers on bike and pedestrian rights, this town is backwards. Where is the sense to baning bikes?

All road user are "permissive users" at best

I gave up my car in exchange for my bike 40 years ago, and have been riding since. In the beginning I was discriminated against by motorists who believed I should ride in the gutter. A group of us got together and formed what was known as BICYCLES NOW. What brought about change and the bike paths which are now present in Denver took a lot of hard work, and re-educating the public. What really brought about change was when we managed to get the politicians involved. The politicians are the ones that make the laws, and provide the earmark funding for a cyclist's bikeway and cycling rights. Turn to your politicians my friends and encourage them to assist the cyclists throughout Colorado on this most important matter.

What do you expect in a Town where Drinking, Gambling and Eating are the most popular Sports...!

It is hard to argue that people should spend money in a town that bans a perfectly legal activity. I also wonder about the legality of the town's ban. Except for restricted access highways, bicycles are legal forms of transport on public roads, for which we have paid. (There is a fallacy that roads are totally financed by gasoline taxes.) Keep up the good work of fighting this inane misuse of public power.

I was under the impression the Federal law protected bicycles and gave them the same roadway rights as cars. I have even been told that by the police. Is that totally incorrect?

To clarify, you'd have to walk in the left *lane* facing traffic when there's no shoulder or sidewalk. Which also means you'd have to cross the road twice.

"the actual distance a cyclist would be required to walk their bike through Black Hawk is closer to 0.5 mi. There are no sidewalks or shoulders for about half of the distance."

So when you walk your bike on those parts, you need to be on the left side, facing traffic, like any pedestrian.

I wonder what the town would do if people actually did that (with or without their bike). Maybe they'll ban walking next?

Perhaps the opposite of "ugly" could happen: bicyclists could obey the ban, walk their bikes the 1/2 mile through town AND actively spend money in the town's shops and restaurants. Motorists will be more inconvenienced by walking bicyclists for sure, but many of those motorists would be owners/employees of the benefiting businesses. Over time, the desire to keep bicyclists' business would encourage the citizens of Black Hawk find a way to accomodate everyone who lives, works, and travels through the town, benefiting all.

If it is illegal to ride one could get off and walk their bicycle. This will take longer and cause more annoyance to motorists than if one were allowed to ride. This whole thing could get ugly.

Whereas it is important to overturn Blackhawk's counter-productive ban, I would urge that cyclists totally boycott Blackhawk as long as the ban is in effect.