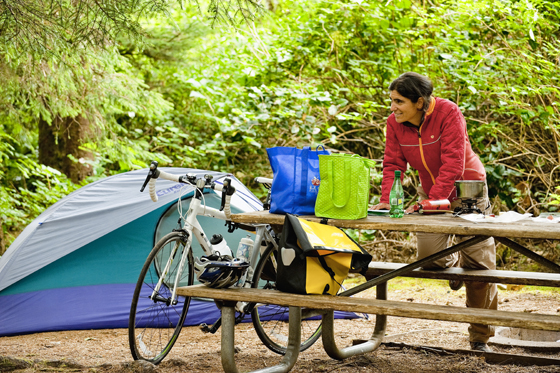 As a native Oregonian transplanted to Montana, it's only natural I would be more than a little bit thrilled to report on the latest developments in Oregon cycling conditions. As an Adventure Cycling cartographer, this news makes my smile even wider.

In December 2013, I had the opportunity to talk to Alex Phillips, Bicycle Recreation Specialist at Oregon State Parks & Recreation Department about some of these developments. She told me about the positive results of a 2012 survey they took of visitors to hiker/biker sites.

The goal of the survey was to assess the needs and desires of the users of these sites. This was the first survey of this user group since they begain establishing hiker/biker sites in 1976.

There were 194 respondents with slightly more men than women participating. The average age was 35 and the oldest was 75. These respondents were overwhelmingly more bicycle travelers than through hikers.

The survey helped Oregon State Parks learn what they were doing right and how things could be better for the human-powered traveler. Based on the feedback received, changes and additions are slated to occur in several state parks including some found on the TransAmerica Trail, Pacific Coast, and Lewis & Clark routes. 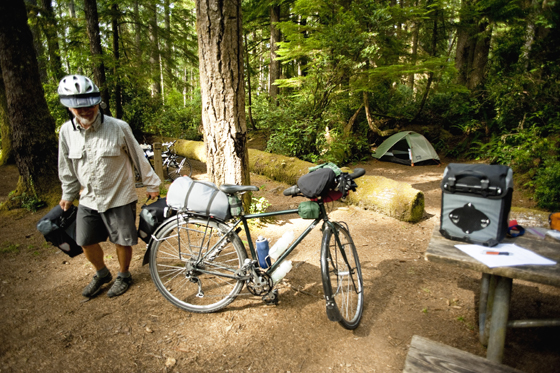 Items that made the list range from moving the location of hiker/biker sites to improve access to water and restrooms to installing bike racks, food storage lockers, and electrical outlets. There are also plans to improve signage to the sites and add covered group shelter areas as possible. A unique feature soon to be found in some Oregon hiker/biker camping areas include what they call a bike pod. These stations will include a bike stand and pump, as well as some basic tools.

Respondents were asked where else they'd like to see hiker/biker sites. I was happy to note a focus on the Columbia River Gorge State Parks including Ainsworth S.P. Ainsworth currently has walk-in sites that often fill and the addition of a hiker/biker area would be much appreciated by cyclists on the Lewis & Clark Bicycle Route.

On a related note and as a bicycle traveler herself, Alex was also happy to report, "Travel Oregon did a separate survey that showed bicycle recreation puts $400 million per year into the Oregon economy. This huge amount does not include bike manufacturing — just recreation." Those cycling dollars really add up! You can read the rest of the findings of Travel Oregon's survey at their website.

Photo 1: Alex Philips begins her meal preparation at a picnic table in the hiker/biker camp in Tugman State Park south of Reedsport, Oregon on Eel Lake.