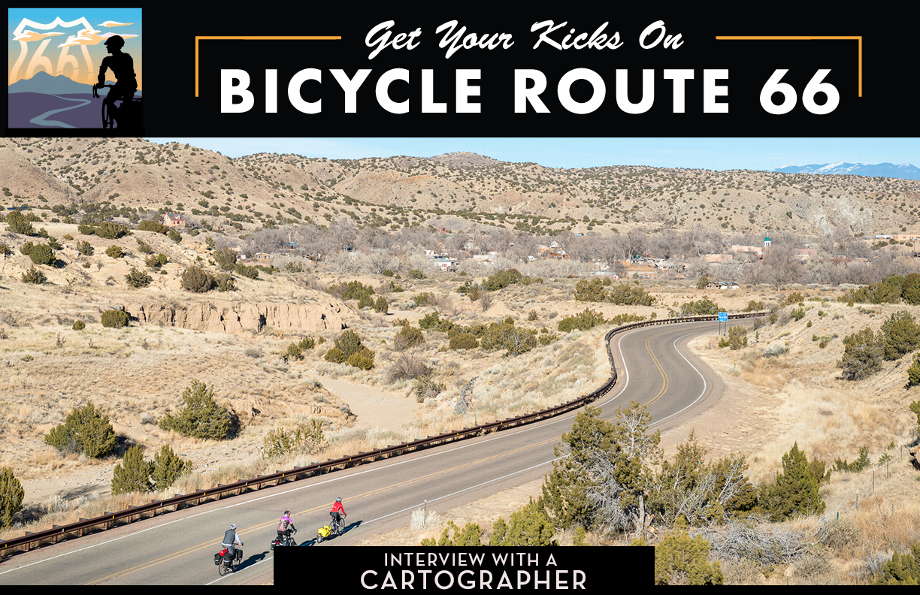 I recently sat down with Adventure Cycling Cartographer and Assistant Director Jenn Milyko to chat with her about the project that has been occupying her department's time for the last four years, the development of Adventure Cycling's exciting new Bicycle Route 66.

The route contains a diversity of landscapes from the flat prairie grasslands of Illinois to the rolling hills of the northern reaches of the Ozark Mountains to the vast, open desert spreads of the Southwest. Roads and highways are dotted with ghost towns and monuments to Historic Route 66, as well as a surprising number of businesses still celebrating their connection to the Mother Road.

This route is a nice fit in our existing route network. It connects two popular bicycle travel destinations and takes us into a new state: Oklahoma! Since it intersects other routes in the network, it also provides cyclists with some options for creating loop routes that will be great for shorter tours. 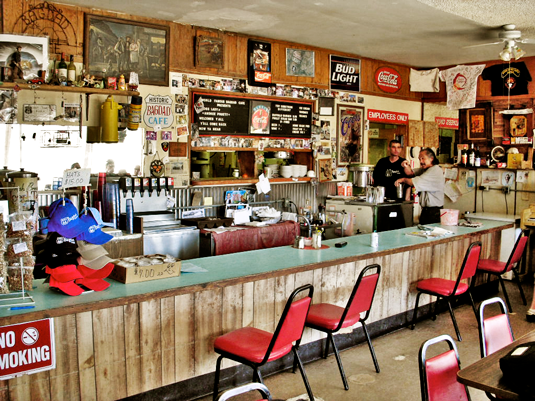 How many diners are on the route?

I have no idea how many are out there! We hope cyclists will write in and let us know their favorites. I know I would certainly want to stop at the MidPoint Cafe in Adrian, Texas. They are home of the "Ugly" Pie and I'd like to try that!

Do riders need to be expert bikers to ride and enjoy this route?

A standard touring bike set up would suit most folks quite well. Some of the roads are on the rough side, so leave the skinny tires at home and put on something a bit more cushy and flat-resistant.

While there aren't a lot of mountain passes on this route, across California, Arizona and New Mexico there is quite a bit of desert with few services and, especially in summer, significant heat. As with most long tours, we recommend starting with shorter days and building up to longer ones as your body adjusts to riding multiple days in a row.

Some areas are in fairly remote parts of the country. Are there enough food services?

While much of the route has plenty of food sources, riders should be prepared to carry food and water across some of the longer desert stretches in the southwestern U.S.

That's a tough one! I think there will be many riders out there trying to recapture the romance of a road trip on Historic Route 66, this time from the seat of their bicycle. They’ll have lots of opportunities to explore the surviving pieces of architecture, abandoned bridges, and businesses from the golden era of the Mother Road. In addition, there’s the change in scenery from the river valleys, a bit of the Ozark Mountains and the red deserts to the Pacific Ocean.

In the east, Bicycle Route 66 begins and ends at Buckingham Fountain in Grant Park on Lake Michigan in Chicago, Illinois. You will want to fly into O'Hare Airport. Accessing Amtrak through Union Station may also be an option.

In the west, Bicycle Route 66 begins and ends at the Santa Monica Pier on the Pacific Ocean in California. You will want to fly into Los Angeles Airport. Accessing Amtrak through Union Station may also be an option.

It's also great that the route crosses several hubs -- Chicago, St. Louis, Oklahoma City, Albuquerque, and Los Angeles -- for cyclists to do this route in pieces from convenient locations.

What is the best time of year to ride Bicycle Route 66?

Westbound from Chicago, spring departures (mid-April) are best to hit the desert before June; autumn departures in September should hit the mountains before heavy snow. Both times should keep hot, humid weather in the Midwest to a minimum.

Eastbound from Santa Monica, spring departures in April/May are best before the desert heats up; mountains might still have snow, but roads are clear. Cyclists might hit some humidity in the Midwest. Autumn departures in late August/September are good as the desert cools but heavy snows haven’t yet fallen in the mountains.

There are six maps in this series.

If I was to leave Chicago in mid-April as suggested, wouldn't I be headed into prime tornado and storm season?

Also, can you comment on headwinds going from east to west as opposed to going west to east.

When will group tours start?

Is it possible to stay in a motel every night along the route? I can make 50-60 miles progress per day. Thank you.

Would like to do this trip unsupported and stay in motels/hotels, minimizing or eliminating the camping. To what extent is it possible to find lodging? Thanks!

There are lots of lodging options and you can use our maps that list lodging contact info along the BR66. Also, take some advice from Jerry McClanahan, author of EZ 66 Guide for Travelers "It's YOUR trip, so plan it the way you want. Some like to plan everything in advance, some just like to take off and hope for the best with very little forethought. I recommend taking the middle road. Allow for serendipity but put together a plan to visit the things your want to enjoy. Make your motel reservations well in advance, or call ahead from the road a day or two ahead (or even that afternoon if you feel lucky!) It's up to you."

I would love to receive your maps, is there a fee?

You can purchase the maps here: http://www.adventurecycling.org/cyclosource-store/route-maps/bicycle-route-66/?utm_source=acawebsite&utm_medium=homepage%20slider&utm_content=route66&utm_campaign=route66%20rollout

Hi .I invite you to cycling on the Silk Road.

The Convention & Visitors Bureau in Joplin is happy to help any cyclist adventuring along Joplin's Route 66. This is the only place along the Mother Road where you can cycle through 3 States (MO/KS/OK) in one comfortable ride. Let's us help make your Route 66 Experience enjoyable.

Hi, this sounds like an adventure I would like to set out on. How do I go about getting the maps?

You can purchase the maps here: http://www.adventurecycling.org/cyclosource-store/route-maps/bicycle-route-66/

30 Off-bike Things to Do along Bicycle Route 66