Bicycle Route 66: Behind the Scenes in Illinois

This week, Ed Barsotti, Executive Director for the League of Illinois Bicyclists (LIB), shares the story of how the LIB worked collaboratively with a committee of stakeholders to create the Illinois Route 66 Trail, which provided a template for the creation of Bicycle Route 66 in Illinois. Check out this interactive map to see the alignment of these routes between St Louis and Chicago. 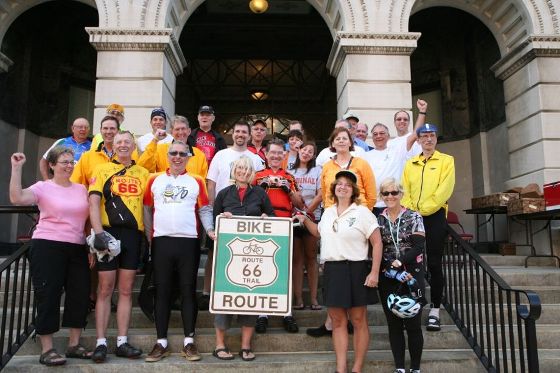 Cyclists rode the Illinois Route 66 Trail and met with city officials at publicity events in 25 towns in 2009.

The Mother Road: from highway to trail

Route 66 defined a nation, a generation, and an era. As it threaded its way from Chicago to L.A., it left its mark on our nation’s history. No other road in our nation symbolizes Americana like the “Mother Road”. And Illinois’ section leads the way with a wealth of authentic sites and attractions, of history and heritage.

From 1926 to 1977, Route 66 led travelers from Chicago to St. Louis, before being replaced by Interstate 55. Today, a continuous Historic Route 66 route is signed and driven by many. In 2005, the Illinois Department of Natural Resources (IDNR) convened a committee of public and private groups with a new vision of exploring the sights, cities, towns, and rural areas of Route 66 at a slower pace. The long-term plan: develop a Route 66 Trail system of off-road paths and comfortable roads for bicycles, equestrians, hikers, and more. Meanwhile, define an interim route that can be used right away while building the project’s momentum.

The result, dubbed “Illinois’ Route 66 Trail," spans 369 miles from Chicago’s Art Institute and Millenium Park’s “Bean”, to the Old Chain of Rocks Bridge – a dedicated bike/pedestrian bridge over the Mississippi River just north of St. Louis. The present route consists of mostly quiet rural roads with 50+ miles of off-road trails and some city streets, and mirrors the signed Historic Route 66 auto route as much as possible.

The IDNR, League of Illinois Bicyclists, and others on the state’s Route 66 Trail Executive Committee have publicized the trail route while promoting improvements to it. The “Route 66 Trail Concept Plan” aims for more miles on future trails and on-road bikeways, and some local agency partners are moving ahead with these improvements. 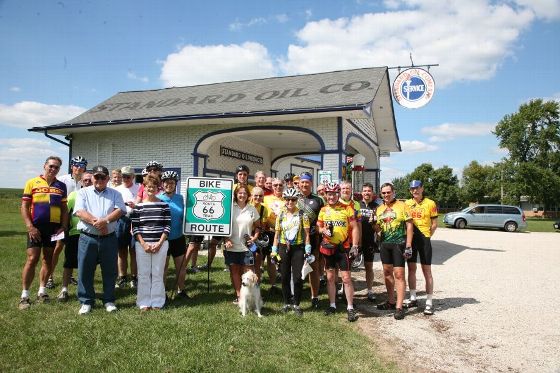 A tale of two trails

The Illinois Route 66 Trail provided the template for Adventure Cycling's Bicycle Route 66 in Illinois, which uses some of the same roads and trails. The main difference is that the Adventure Cycling route continues beyond the Illinois border all the way to California and was designed for the bicycle traveler with directness in mind. The Illinois Route 66 Trail is a state route designed for the recreational bicyclist and often leaves the Historic 66 highway in favor of winding backroads.

This map shows how these two routes align: 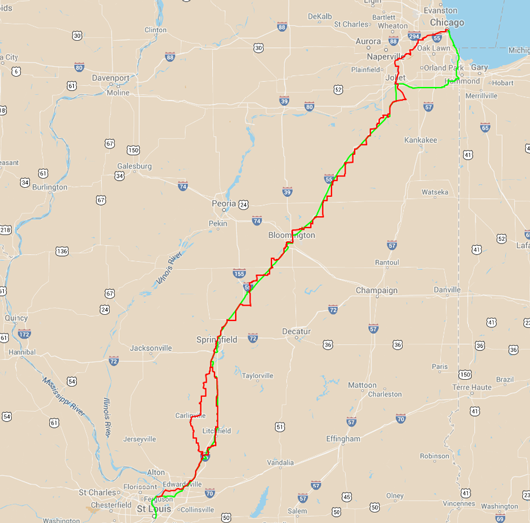 So what kinds of navigational tools are available for these routes? Many communities along Illinois Route 66 Trail have signed the route and a guide (available in published and online versions) provides cue sheets and maps while informing cyclists about attractions and accommodations. Adventure Cycling released its new Bicycle Route 66 maps on March 2nd, and the first map section displays the 326.8 miles of the route between Chicago and St. Louis.

There is another type of route that will eventually take shape along this corridor - U.S. Bicycle Route 66. Official U.S. Bicycle Route designation is not a current priority, however. This is due to unwillingness by a number of townships, counties, and towns to formally approve their Route 66 Trail road segments, as Illinois’ unique liability disincentive to designate on-road bikeways is a powerful deterrent for some. For more background and information on this liability stipulation, check out this page on the LIB site.

Highlights not to miss

I personally have driven the entire route when scouting its initial course. I biked its entire length at a 2009 promotional event, and on various segments numerous other times.  Three highlights stick out:

Another great opportunity for exploration is to combine bicycle and train travel, and luckily, you can do it easily along this route. Amtrak’s Lincoln Service line offers roll-on bicycle service for a $10 fee and gives the trip great flexibility – 8 stops along the route allow you to bike one way (or part of the way) and train back.

But never missed are the many small and medium-sized towns that embrace its Route 66 history, offering such folksy attractions as Odell’s and other old gas stations, Mother Jones’ Grave, Henry’s Rabbit Ranch, the Gemini Giant and Paul Bunyan statues, and Pontiac’s wall murals.  Also along the way are quaint Route 66 museums and significant historic sites like Lincoln’s Tomb.

Ed Barsotti has been the Executive Director for the League of Illinois Bicyclists (LIB) since 2001. The LIB is Illinois’ statewide bicycle organization which works to improve bicycling conditions through bike-friendly road designs, more trails, education of bicyclists and motorists, and more. LIB sponsors the annual Grand Illinois Trails & Parks (GITAP) bicycle tour in Illinois and collaborates with others to develop resources – such as the Illinois’ Route 66 Trail guide – for self-guided bike tourism.

Photos by Diane Banta of the NPS Rivers, Trails and Conservation Assistance Program.

BUILDING THE U.S. BICYCLE ROUTE SYSTEM is posted by Ginny Sullivan and Saara Snow of the Travel Initiatives Department and focuses on news related to the emerging U.S. Bicycle Route System (USBRS). The USBRS project is a collaborative effort, spearheaded by a task force under the auspices of the American Association of State Highway and Transportation Officials (AASHTO). Members of the task force include officials and staff from state DOTs, the Federal Highway Administration, and nonprofits like the East Coast Greenway Alliance and the Mississippi River Trail, Inc.