In April 2015, Adventure Cycling's Jenn Milyko traveled to New Mexico, "Land of Enchantment," for business and a look at Bicycle Route 66. 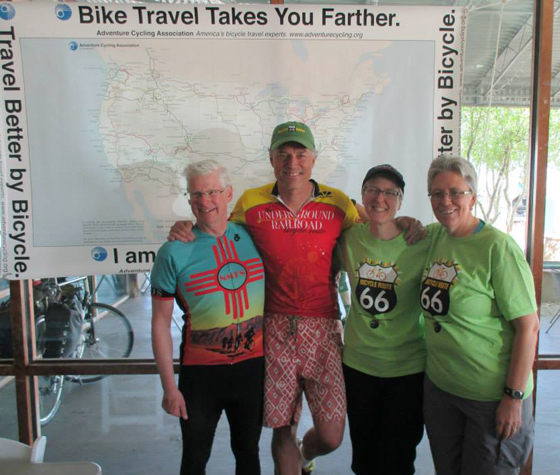 I was invited, along with executive director Jim Sayer, to participate in a celebration of Bicycle Route 66 (BR66) in Albuquerque, New Mexico which followed the previous day's New Mexico Bicycle Education Summit.

This BR66 event was organized by the New Mexico Touring Society and New Mexico Bicycle Educators and supported by several New Mexico businesses and organizations. Life members and New Mexico cycling advocates, Chris Marsh and Tammy Schurr (also an Adventure Cycling event director and leader), along with a team of volunteers, were instrumental in the planning process and making sure it all went off without a hitch. 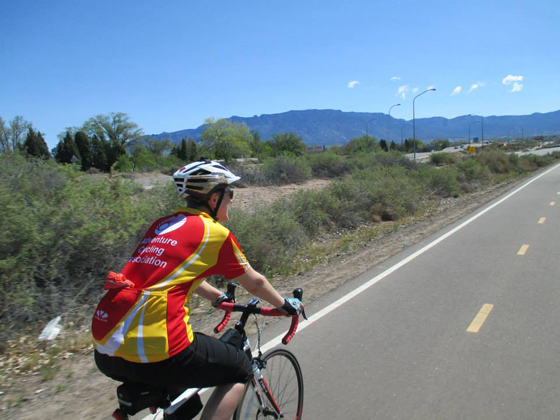 The morning kicked off with a 30-mile ride in town showcasing some of the great riding available in Albuquerque, including a stretch of our newly mapped and published Bicycle Route 66! We had a beautiful morning to pedal with the sun shining and a light wind. Alas, the wind picked up by the time the ride was ending! (Local cyclists will tell you not to say the four-letter-W-word out loud, it only calls it in.) 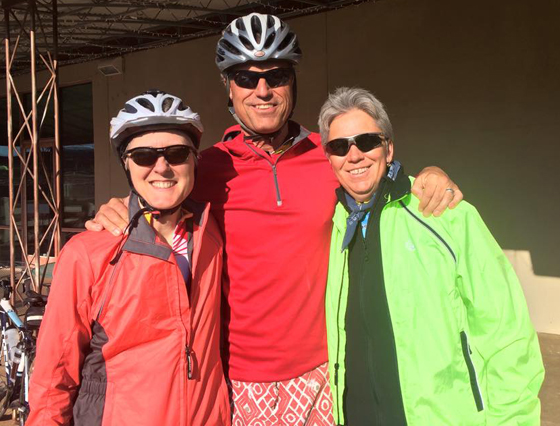 Jenn, Jim and Tammy enjoying the sun before hitting the bike trail.

Post ride, we enjoyed a catered lunch of New Mexican cuisine and lively conversation with the 173 cyclists who joined for some part of the celebration. 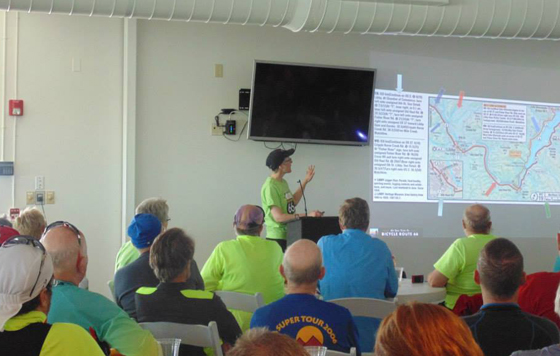 Jim presented on the state of bicycle travel and I spoke about our maps in general and shared highlights from the Bicycle Route 66. It was an enthusiastic group with about half of them Adventure Cycling members, and we always love to connect with members! The crowd also included our Road Test guru, Patrick O’Grady, and Adventure Cycling board president Wally Werner.

In the days after the event, Tammy and I went to Santa Fe where we met with New Mexico Department of Transportation and Tourism Department staff to talk about the US Bicycle Route System designation process. Wheels are turning within both departments to make this a reality for both USBR 90 and USBR 66.

Mixed in with all of the above and trailing into the rest of the week, Tammy gave me a whirlwind tour highlighting some of her home state. We drove more of Bicycle Route 66 as far west as El Moro National Monument.

My favorite part of this section would have to be the Pueblo Alternate route through Sky City on the Acoma Pueblo. I highly recommend taking the time to visit this spot on BR66. The tour is well worth the time and money.

Before leaving for home, I even rode a small piece of the Southern Tier route out of Las Cruces. We loved riding beneath the pecan orchards! 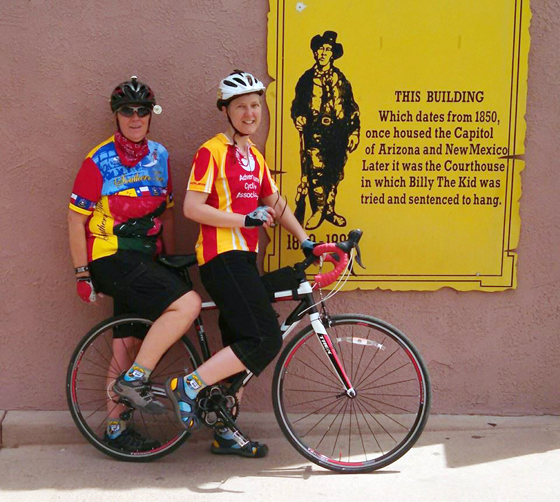 Tammy and Jenn showing off matching New Mexico Bicycle Route 66 socks in front of Billy the Kidd in Mesilla, NM on the Southern Tier route.

I returned to the office rejuvenated and ready to rock on route updates and the release of our first GPX data products for sale. At some point in the future, I plan to go back and explore more of this delightful state from the seat of my bike.

Between the Great Divide in 2013 and the Southern Tier this spring, NM has become one of my all time favorite places to find REAL adventure!