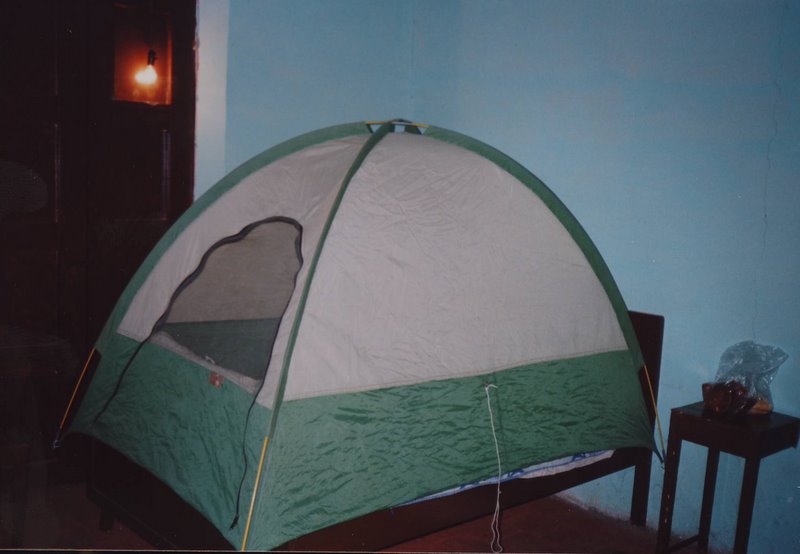 Tents aren't just for outdoor camping on a bicycle trip. Check out the photo above. Not enough touring cyclists understand that their tent can also double as a free-standing mosquito net.

Pedaling in Mexico, I came into a town with no suitable tent sites in view. I was a semi-employed actor at the time and on an extremely frugal budget. I found the least expensive hotel room that had a fan.

I didn't realize until later that I had roommates — hundreds of mosquitoes, lurking behind tattered curtains and dusty bed covers. Normally, I'd shut the doors and windows and then go on a mosquito killing spree. But the room was insanely hot and there was no glass in the window openings ... only bars.

I was going to be eaten alive.

I finally resorted to setting up my tent on top of the bed and positioning the fan so some circulated air would pass through the netting.

It was hot ... akin to sleeping in an toaster oven.

The entire episode was worth the look on the hotel owner's face. She knocked on the door, aiming to collect the money for my night's stay. I opened the door and she got a glance at the tent set up on the bed. It was as if she was staring at an elephant.

After she regained her composure, and I promised in broken Spanish that I wouldn't build a campfire in the middle of the room, she walked away shaking her head.

"Gringos," I heard her mumble, as she shuffled down the hall.

I think traveling by bike and camping outdoors during the warmer months is a great way to see the countryside on a budget even an entry level mountain bike (http://tour-de-bike.com/gmc-topkick-dual-suspension-mountain-bike-review) m is fast and better than nothing.

I also setup my tent on a cockroach-infested bed in a cheap hotel in India. However depending on where you're going I would still recommend to take an actual mosquito net because if it is hot and humid as it is in South East Asia (and most places where there are mosquitoes) there is no way one can sleep in a tent with no AC. At least with a mosquito net you can feel the fan (I sometime even put the fan inside the net in order to feel it better). Here are some good mosquito nets for bicycle touring: http://www.cyclocamping.com/products.asp?cat=78