Last week, the American Association of State Highway and Transportation Officials (AASHTO) announced the approval of two new U.S. Bike Routes: USBR 45 in Minnesota and USBR 35 in Michigan.  We’re pleased to have a guest post from Kirk Steudle, director of the Michigan Department of Transportation and president of AASHTO in 2012, to celebrate this announcement and reflect on the impact U.S. Bicycle Routes may have for states and communities that embrace them. 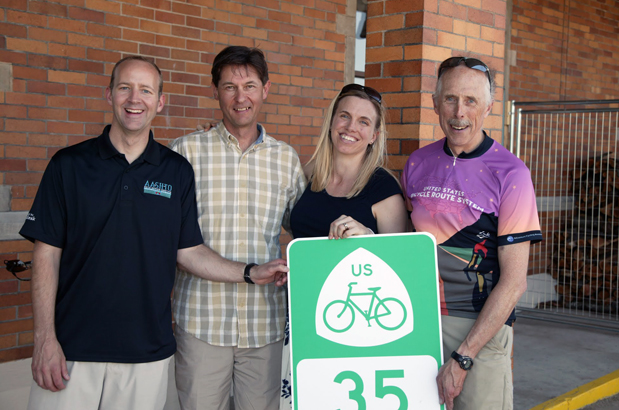 Now that the weather is warming up in Michigan, there’s nothing better than getting out on a bicycle to see the sights.

Bicycling is a significant and valued mode of transportation, recognized as such both by the Federal Highway Administration (FHWA) and Transportation Secretary LaHood, as well as the Michigan Department of Transportation (MDOT). MDOT is committed to the development of transportation options that support the full range of mobility choices, including biking and walking. At a time of rising gas prices, economic challenges, and a greater awareness of the need for healthy living, bicycling is a valid, green, and enjoyable way to travel.

Bicycling is also popular for travel and recreation. Its growing popularity is evident in the increasing number of bicycle tours occurring in Michigan and around the country. There are many multi-day bicycle tours in Michigan that attract cyclists from around the Midwest to experience all the splendorMichigan has to offer.

Bicycling can also be an economic driver. Research and studies on the economics of bicycling from around the country, including here in Michigan, have demonstrated that the bicycling-tourism industry can contribute significantly to local economies. One study in Michigan, funded by MDOT and prepared by Michigan State University, examined two specific Michigan rides. The study found that on the Michigander Bike Ride, cyclists and their travel parties spent more than $200,000 during the event, and in the Midwest Tandem Rally, participants and their travel parties spent more than $250,000 over the three-day event. Similar national studies estimate that bicycle tourists spend on average between $98 and $233 per overnight stay.

These dollars really add up, particularly when you consider that these numbers are just a snapshot of what is happening all over the state. When you multiply this data by the nearly 400 bicycling events that take place annually in Michigan, and add the countless numbers of touring bicyclists that travel through our state, the impact on local economies is clear.

This type of tourism is what our state and communities thrive on. Michigan has so much to offer, from roadside farm markets, to ice cream shops, to quaint bed and breakfasts, to state park campgrounds. Communities large and small can capitalize on this trend by providing bicycling infrastructure that helps create a sense of place and enhances transportation options. Such changes not only benefit residents’ quality of life, but also make these communities more attractive to visitors.

Along these lines, one of the efforts MDOT is proud to be a part of is the U.S. Bicycle Route System (USBRS). With AASHTO’s approval of U.S Bike Route 35, Michigan now has two designated bicycle routes; we’re one of the first states in the nation to have both a north-south route, USBR 35, and an east-west route, USBR 20. At just over 300 miles, USBR 20 is the only U.S. Bicycle Route in the country that begins and ends with a ferry ride. The eastern-most terminus of the route is Marine City, where bicyclists begin the route in Michigan following a short ferry ride from Canada. On the west end, in Ludington, bicyclists can travel across Lake Michigan on a car ferry. Michigan’s second bike route, USBR 35, is also unique, measuring more than 500 miles in length from New Buffalo, on the border with Indiana, to Sault Ste. Marie, Canada. USBR 35, which travels along the eastern edge of Lake Michigan for much of its length, will allow bicyclists to experience summer festivals where communities of all sizes celebrate farm fresh produce, as well as their heritage and culture.

Capitalizing on the growing bicycle-tourism industry makes smart business sense. Biking offers economic and health benefits, and providing bicycle infrastructure improves the quality of life for Michigan communities. Bicycling offers freedom from gas pumps and traffic, and increases your connection with nature and the people around you.

So air up those tires, put on a helmet, and let’s go. It’s a great time to get out for a bike ride.

Guest post by Kirk Steudle, director of the Michigan Department of Transportation.

Thanks! We'll look into it.

Hi, your article has been pirated and reposted at

They are an australian company but hosted in the US, so vulnerable to DMCA.

I just read the article where bikes are considered one of the main means of trasportation in the Netherlands and in Austria. So, I think bicycling will be quite a thriving tourism, moreover Michigan has lots of stuff to visit. I love this kind of transportation. Plus it reduce the level of gas emission that is good for our body and nature.