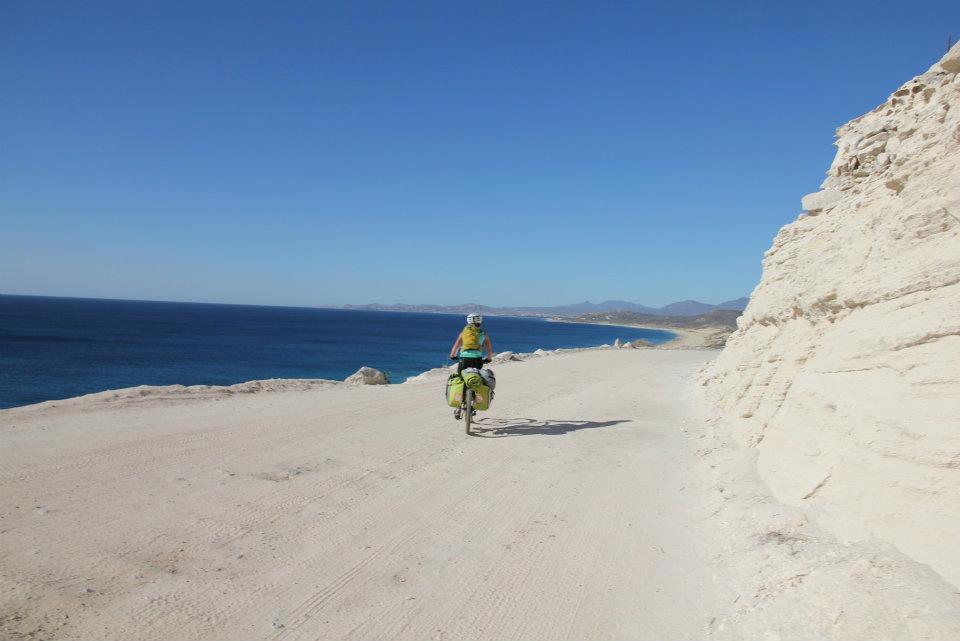 My lastest bicycle tour took me to southern Baja for a couple of weeks for some fun in the sun. Unlike other tours I've taken south of the border, this one presented some unique challenges. For starters, the route called for a mix of pavement, sand, and gravel roads. Heading into the Baja desert, we also needed to be sensitive to flat tires from thorns, in addition to hydration with temps much higher than what we're used to this time of year. Here's a rundown on the route, bike selection, equipment, and tools.

For a two-week tour, our total distance was only 212 miles, which made for some short days, but allowed us to take a lot more side trips along the way. San Jose del Cabo has an international airport that is easy to fly to, and the town also makes a great starting point. Overnight stops included Cabo San Lucas, Todos Santos, Los Barilles, and Cabo Pulmo.

With a fair amount of sandy and gravelly roads ahead of us, we left our traditional touring bikes at home, and pulled out the mountain bikes. Like my touring bike, I still had a huge range of gears with a 3x9 drivetrain. The Continental Traffic 26x1.9 tires were very tough against punctures, and had a good low profile tread pattern that worked well both on and off pavement. With just a couple spacers, the generic Axiom rack mounted up to the bike easily, which was a surprise considering that disc brakes often cause some headaches with rear racks. The Tioga Spyder saddle got a lot of remarks from passersby, but I won't back down on saying that it was super comfy from start to finish. 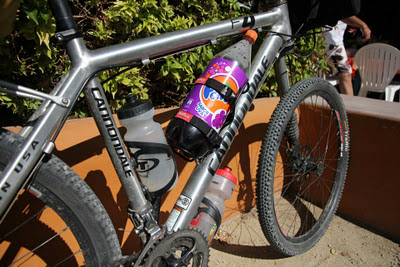 I'm just going to go ahead and call the Salsa Anything Cage my favorite new product to come out of 2011. The days of being content with a wimpy 20oz bottle of soda in my bottle cage are over! For hauling the rest of my gear essentials, I went with a simple set of Arkel rear panniers, and a Jandd handlebar bag. With tent bungied down to the top of the rack, this was more than enough space for 2-weeks worth of gear.

Once again, we were very fortunate when it came to mechanical. Just one flat tire and a broken chain slowed us down. The full tool kit comprised a Park Tool Rescue multi-tool, pre glued tire patches, a couple tubes, chain pin, Topeak Road Morph pump, a FiberFix spoke, and some zip ties.

I didn't practice what I preach on this trip, and I got burned. Even if you're touring in the desert, always bring rain gear, even if the forecast calls for nothing but clear and sunny skies. Outside of that, I was prepared with a couple pair or bike shorts, jerseys, and socks, a couple changes of day clothes, cycling shoes and sandals, a helmet, and sunglasses. 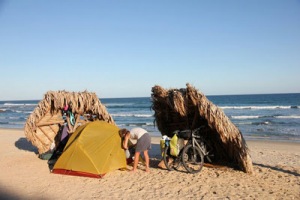 There really wasn't a ton to carry on the camping gear end. Just an MSR Hubba Hubba tent, summer time sleeping bag, Thermarest sleeping pad, and a Salsa titanium spork. Dealing with gas for stoves in small tourist towns seemed like a pain, so we left the cooking stuff at home.

In addition to clothing and tools, there were also the miscellaneous essentials, such as toiletries, bike lock, camera, a map of the area, a Spanish/English dictionary, and of course, a beach towel and sunscreen.