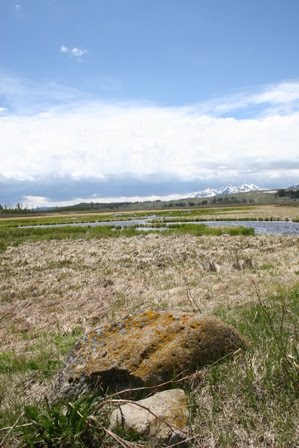 Every now and then — but not often enough — I get together to do some riding with my friend Chuck Haney, an outdoor photographer from Whitefish, Montana, whose work often graces the pages of Adventure Cyclist magazine.

One of our most memorable trips took place in July of 2002, when we met up in tiny Wise River, Montana. This general region holds one of the most spectacular expanses of mountain-and-basin country in all of Montana; and, in terms of Adventure Cycling routes, it’s a true crossroads.

A story about our trip that I wrote (accompanied by Chuck’s photographs) for the November/December 2002 Adventure Cyclist includes this passage: “For my money, a primary vortex of cycling energy is southwestern Montana, where the Great Divide Mountain Bike Route, the TransAmerica Trail, and the Lewis & Clark Trail all run through. It is a land of verdant mountain islands, sage-clad slopes baked dry by the sun, lush hayfields, pastures teeming with Hereford cattle, afternoon thundershowers, natural hot springs ... and a seemingly endless supply of terrific trails and roads for riding.”

Names on the face of the map of this area include the Big Hole Valley, Red Rock Lakes National Wildlife Refuge, Bannack State Park, the Big Sheep Creek Backcountry Byway, and lofty Lemhi Pass, where the Lewis and Clark expedition first surmounted the Continental Divide. If you’ve never been to the region, I highly recommend that you plan a trip to spend a few days poking around — whether you're into road riding, mountain biking, or both.