Today we're featuring the two midwest states that have anticipated U.S. Bicycle Route designations: Ohio with USBR 50 and Illinois with USBR 36 and 37. While the AASHTO spring meeting happened yesterday, it often takes a few days to hear back about the approvals, so stay tuned! 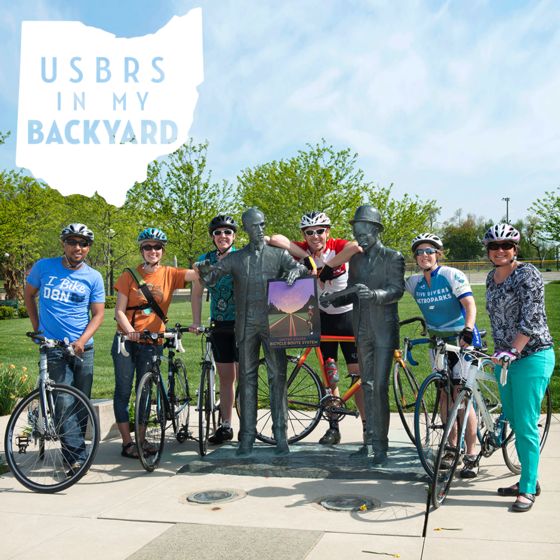 Cyclists hang out with the Wright Brothers on USBR 50 in Deed's Point MetroPark, Dayton OH.

Ohio’s newly approved U.S. Bicycle Route 50 begins at the Indiana border on Paint Road in Preble County Ohio, traversing 313 miles and leaving Ohio at the Market Street Bridge to West Virginia. Thirty-nine jurisdictions around Ohio collaborated on the development of USBR 50, and the Ohio Department of Transportation (ODOT) coordinated the efforts. Ohio’s segment of USBR 50 is the state’s first USBR designation, and the cross-country route will eventually connect Washington, DC to San Francisco.

Julie Walcoff, ODOT Bicycle Pedestrian and Safe Routes to School Program Manager, said, “The designation of Ohio’s first USBR was truly a collaboration. The Department of Transportation, planning organizations, many advocacy organizations and volunteers all worked together to assure our new route would provide scenery, amenities and a comfortable route as riders take the opportunity to tour our beautiful state.”

The route follows a combination of roadway segments and ten different trails, including the Camp Chase, Wolfe Creek, Great Miami River, Ohio to Eerie, Creekside, Maxtown, Alum Creek, Olentangy Greenway, Scioto Greenway, and the T.J. Evans Panhandle Recreational Trails. These trails provide off-road opportunities to explore Ohio’s natural and agricultural heritage, including woods, creeks, pastures, farmlands, and wildlife, while connecting Ohio’s vibrant urban areas such as Columbus and Dayton. In Columbus, cyclists can stop at the Ohio Stadium, the Short North Arts District for a variety of restaurants, or check out fun events like Community Festival in June, Ohio State Fair in July, Xenia Community Festival in September, and the Highball Halloween in October. In Dayton, home of the Wright Brothers, cyclists can visit a number of historical sites of interest, including the Dayton Aviation Heritage Museum and the original Wright Brothers Bicycle Shop. 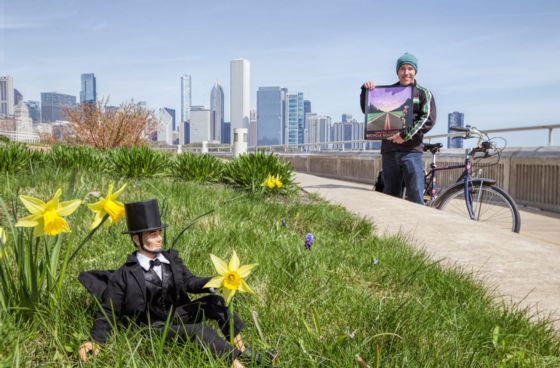 Steve Buchtel of Trails for Illinois hangs out with mini Abe on the Chicago Lakefront Trail on USBR 37.

U.S. Bicycle Route 36 and 37 follow the Lake Michigan coastline from the Indiana border to the Wisconsin border. The route takes cyclists through the heart of Chicago, Highland Park, Lake Forest, and Lake County on some of the best bicycle trails and roads along Lake Michigan. Trails for Illinois, the Illinois Department of Transportation (IDOT), Chicago Department of Transportation, and various other local partners coordinated to put together the route, obtain local agreements, and submit the application in only a few months’ time. For many states the process can take one or more years.

Secretary Ann Schnieder of IDOT spoke about the importance of the designation to the state: “The designation of US Bike Route 36 and 37 in Illinois demonstrates our state’s commitment to an inter-connected, sustainable, and multi-modal transportation system. These routes provide residents and visitors access to world-class bicycle accommodations and this national designation is an endorsement of the active transportation vision entrenched in the Illinois Bike Transportation Plan.”

Paula Trigg, Lake County Director of Transportation, sees the local benefits of connecting to the USBRS: “The Robert McClory Bike Path is one of Lake County’s regional bikeways. We are very excited that the Robert McClory Bike Path has been designated on the U.S Bike Route System as USBR 37 and very supportive of the plan to connect to other existing and planned U.S. Bike Routes to create the Lake Michigan Loop Trail. The beauty of the Great Lakes region is well worth exploring on two wheels!”