On Wednesday the 28th in Louisville, Kentucky, a meeting will take place that will draw new lines on the map, expand the frontier of cycling destinations, and move mountains. Well, maybe not that last part, but still, it's big.

This is the spring meeting for U.S. Bicycle Route designations, when the American Association of State Highway and Transportation Officials (AASHTO) looks at applications that have been sent in from state transportation agencies and marks their stamp of approval. For our posts this week, we will be exploring the U.S. Bicycle Routes that have been submitted for approval in four states, including Washington, Illinois, Ohio, and Massachusetts, as well as the District of Columbia.

Today we'll be focusing on the coastal states — Washington State, DC, and our surprise state, Massachusetts — and learning more about the exciting attractions on the USBRs coming soon to their backyards. 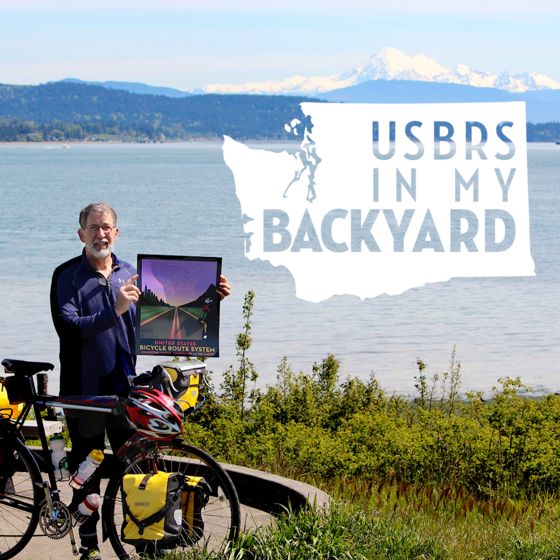 USBR 10 is one of the most mountainous and scenic interstate bicycle routes in Washington. The cycling tourist will be inspired and challenged by the scenic alpine climb over Rainy and Washington Passes in North Cascade National Park (considered America’s Alps). USBR 10 also summits Loup Loup Pass near Twisp, scales the Okanogan Highlands at Wauconda and crests the Kettle range at 5,575’ Sherman Pass. It follows the Skagit, Methow and Okanogan Rivers, crosses the Columbia River at Kettle Falls and winds along the beautiful Pend Oreille River from Lone to Newport.

The USBRS effort in Washington State is being coordinated by Washington Bikes (formerly known as the Bicycle Alliance of Washington) in partnership with Washington State Department of Transportation (WSDOT). WA Bikes and WSDOT will continue to support this route with travel tips and information. They will work towards future signage and are planning to start the nomination process for other significant route corridors in the state. 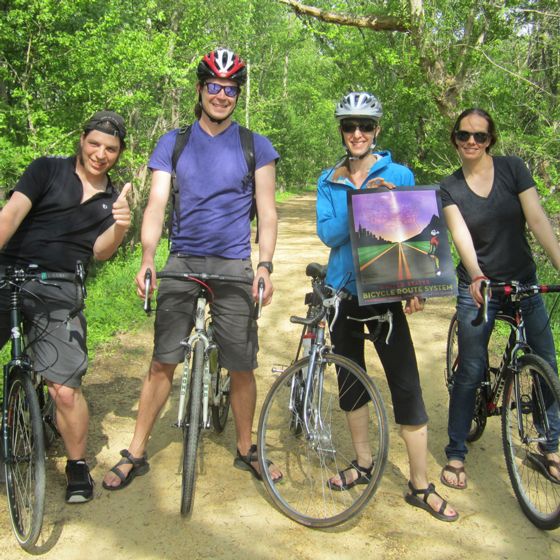 Cyclists enjoy a ride along the C&O Canal that will be designated as USBR 50 in DC.

The District of Columbia will soon join the USBRS with the designation of U.S. Bicycle Route 50 along the Chesapeake & Ohio (C&O) Canal National Historical Park. Located on the north bank of the Potomac River, the 184.5-mile canal towpath originates in DC, then crosses Maryland to Cumberland, where it connects with the Great Allegheny Passage Trail. DC's portion of the C&O Canal will connect to the already designated portion in Maryland. It is an important link to our nation's capitol, and the route will eventually connect DC to San Francisco.

The canal became a National Historical Park in 1971. Today, much of the canal has been drained of water and reclaimed by the forest, however the canal's towpath remains a favorite of hikers, joggers, and bicyclists. There are many opportunities to engage with early American history along the route. The DC portion of USBR 50 begins in the Georgetown area, next to the Rock Creek Parkway. There are many shops, a series of lift locks, and barge rides during the summer. 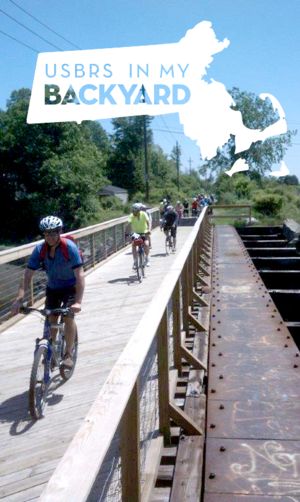 Cyclists cross the Saugus River on the Northern Strand Commmunity Trail in MA, soon to be USBR 1.

Our Travel Initiatives team was surprised and excited to hear that the Massachusetts Department of Transportation (MassDOT) applied for designation of a segment of U.S. Bicycle Route 1, along the Atlantic coast. The Massachusetts segment of USBR 1 includes some of the most scenic urban and natural scenery in the state and traverses riverfront paths and rail trails in eastern Massachusetts, connecting major cities and recreational attractions. The route currently comprises the Paul Dudley White Bicycle Path along the Charles River through Boston, Cambridge, Watertown, and Newton, along with the Northern Strand Community Trail to the north of Boston. Many historical and scenic landmarks along the path offer bicyclists an opportunity to learn and explore.

“U.S. Bicycle Route 1 in Massachusetts is steeped in history, culture, and beauty, as one would expect from this Commonwealth that has played such a key role in the American story,” noted Ned Codd, Assistant Secretary for GreenDOT at the Massachusetts Department of Transportation (MassDOT). “This designation is a great way to put Massachusetts’ path network on the national map, and connect our healthy transportation network with those of other states.”

The 2008 Massachusetts Bicycle Transportation Plan serves as the blueprint for establishing this segment of USBR 1. Massachusetts is actively pursuing further trail funding and construction for the other planned trail segments.

I live in Washington State and ride all over, but i live in the lower part Walla Walla, WA. area where the Louis and Clark trail goes though. I am also a Warm showers Host. We have see so many riders coming over Lolo pass to the west coast it is to bad that hwy 12 and state route 14 were not put on that plan. I do not know the amount of riders on the north side but there are enough riders though this area to think about it.