Andy Elliott was 16 when he did Bikecentennial in 1976. One of the highlights was seeing a high school classmate who was riding the TransAmerica Trail in the opposite direction by happenstance in a café in Kansas. Their story was covered by a local newspaper.

Andy and his group — 1FTAWK624 — plan to hold a reunion this summer and attend the Montana Bicycle Celebration. Group members include: Bill Schroder, group leader; Elaine Becker, who did leader training with Bill, but was not able to lead a ride; David Gallagher, from Dublin, Ireland and now lives in London, U.K.; Guus (Jan Willem) Touker, the Netherlands; Ron Holt, central coast of California and lived in Missoula for a number of years; Dennis Simonovic, lives near Battle Creek, MI; Terry Quick, also near Battle Creek, MI; Gene T. Chu, lives in San Francisco; Phil Bernstein, lives in Portland, OR; Gerald W. Schmidt, from southern California; Barbara E. Clark, not yet found; and Chris Graham, lives in Massachusetts.

During my sophomore year of high school, my dad showed me a newspaper article about Bikecentennial. It talked about the vision to facilitate cycling trips across the U.S. in commemoration of the Bicentennial.

I got a touring bike with money I’d saved up from delivering newspapers. In the coming months, I would do rides of 20–50 miles several times a week, at times carrying bricks in my panniers. I also did a couple of century rides and camping trips.

In June my family loaded up the car and drove from Northern California to Reedsport, OR. I found my group, 1FTAWK624 — the F stands for “fast,” holed up at a local motel. There was big Denis, a former lumber jack, and his friend Terry, both from Michigan; Gus from Holland; Gerry, whom we called “Masi,” from California; Ron from Minnesota; Gene from the DC area; Phil and Chris who were about my age; and two women, Elaine and Barbara. Dave, from Ireland, met up with us in Central Oregon. And there was also Bill, a former Marine, and our enthusiastic and confident leader.

I was thankful for a system that had been well planned out. We were given detailed route maps, and every group had pots and pans, a first aid kit, and tools, all carried by the clean-up rider — either Bill or Marty.

The first two or three days were physically demanding as we climbed out of sea level to the coastal range, then into the Cascades. I felt really homesick and wondered whether I could survive. Dave eventually caught up with us and became like an older brother to me.

Crossing the Snake River Gorge there were so many mosquitoes that it was difficult not to swallow some. Idaho was the beginning of some serious mountain climbing for our group. The mountains continued for weeks as we ascended and descended passes along the Continental Divide. The route took a turn southward near Missoula, and we rode southeast into Wyoming, and eventually to Pueblo, CO. At Highway 50, we took a left and began our final 5,000-foot descent out of the Rockies and into eastern Colorado and Kansas.

I was struck by the friendliness of Kansas folks who waved at us from street corners and offered us free refreshments. Somewhere near the exact center of the state, four of us set out one morning at a good clip. We were making progress until we came to a section of highway that was being repaved. A worker chatted with us while we waited, then told us we could go ahead. All of a sudden, I was riding on fresh laid tar. I gripped my brakes but the surface was like an ice rink. My back tire slid out and I landed on my side, wet tar covering my bike, clothes, and skin. Terry was drafting just behind me and also fell. Our group leaders mercifully decided to use up a precious rest day so Terry and I could clean up.

There was one highlight on that day. My high school classmate, Kent, was riding in an east-west group, and we happened to meet up at a local café the afternoon of the accident. We had about thirty minutes to chat before his group was ready to leave.

The Ozark mountains in Missouri were very challenging. We were continually riding up a hill, only to ride down again a short time later. The process was repeated dozens of times each day. I found it more demanding than the long grades of the Rockies.

One night in St. Genevieve, MO, we were camped near the banks of the Mississippi River when it started raining cats and dogs. Some local people took us to a local church where we slept in the back on pews, even as services began at daybreak. When we arrived back at our campsite, we found huge oak trees had been snapped in half by hurricane-force winds. A few tornadoes had reportedly touched down during the night as well. We were lucky to be rescued by those strangers. 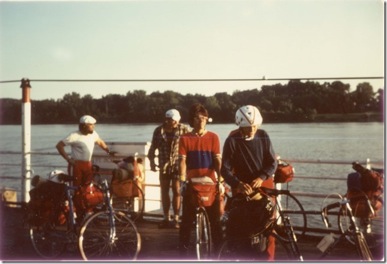 A few days later, near Carbondale, IL, I arrived early at the campground and thought I’d selected an excellent spot for our tent. As I was just completing my labors, I was informed by a worker that it was on top of an Indian burial ground — a big no-no, apparently. I had to start all over again.

The B76 map booklets told us where to go at every turn. We always knew how far to the next landmark. In the evening, our leaders would analyze the next day’s route. One day, Masi and I were riding together in Virginia, and we found a more direct way to go. One intersection had a fading stone marker that signified “birthplace of Patrick Henry.”

Our ride officially ended in historical Williamsburg, VA, but a few of us decided it didn’t count until we touched our front wheels in the Atlantic Ocean at Virginia Beach. Since Bill hailed from that area, he led the way as we continued on to the coast at an extremely fast pace. 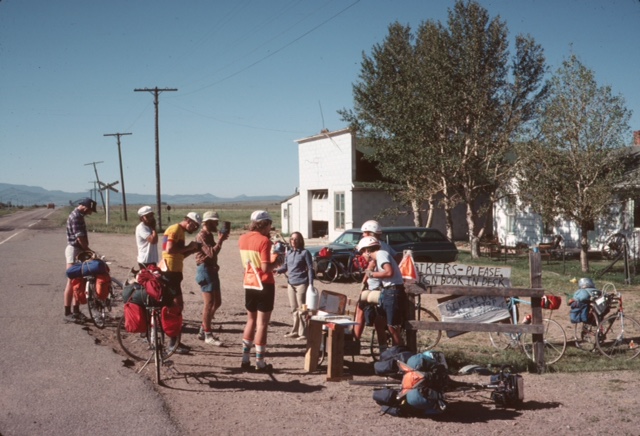 My dad came out from California and met me at Bill’s house the next day. We then drove around visiting colleges for a week or so. Remembering the beauty of the Grand Teton Mountains in Wyoming, I eventually moved to that area in 1985.

Most of our group has become reconnected over the past year or so in the process of reunion planning for the 40th, and we are looking forward to reminiscing in person.