An Introduction to Bicycle Travel Etiquette 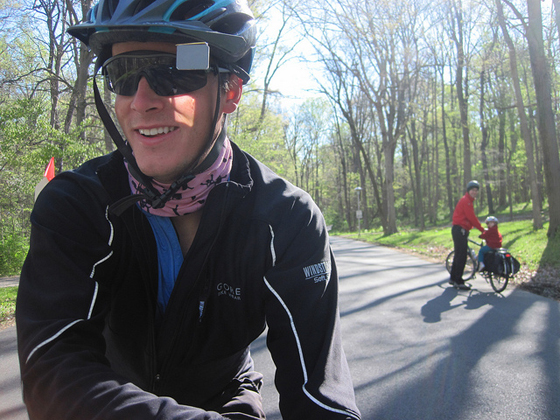 In December of 2012, I wrote a blog post on Bicycle Travel Etiquette in response to some reports that had trickled into our office about less than courteous behavior by traveling cyclists at a few Cyclists Only Lodging and Camping locations.

Some background for those not familiar with Cyclist Only accommodations:

Over the years we have received inquiries from people — private citizens, churches, city officials — who see traveling cyclists come through their community and want to offer cold water, a place to pitch a tent, a warm meal or a bed to sleep in. These services have been extended in the spirit of our very own trail angel, the late June Curry.

We add them to the service directory on our maps as Cyclists Only Camping or Lodging where appropriate or direct them to the WarmShowers community if they are not located adjacent to our route network.

In my book, these people are shining stars of goodwill, exemplifying what world traveler Andrew Evans wrote in a recent National Geographic article, "Instead of suspicion and assuming the worst in others, travel forces us to trust total strangers and hope for the best. Instead of defining the world by enemies, it lets us color the globe with new friends."

So it was with concern that I wrote my blog post in December. I wanted to attempt to reverse the bad trend before it gained momentum. I began soliciting comments from cyclists and hosts, staff members, and representatives of WarmShowers.

Through an email exchange, Randy Fay, of Warmshowers told me, "We have occasional complaints about members, but I don't think they have increased except perhaps in proportion to our membership, which has shot up [in 2012] by 10,000. ... In order to improve our process, we began tracking serious accusations about members. Typically we've had only a few complaints a year. Since we started formally tracking  *serious* allegations [in November 2012], we've had three."

Mark Martin, also of Warmshowers echoes Randy, "I have to agree with Randy — we really don't have a lot of trouble with guests and hosts."

On our Facebook page, Jim says, "This needs to be turned around ASAP! Respect is the keyword. Always leave a place better than you found it!"

But it's not all bad, Rachel added, "This is interesting, totally different experiences than on the warmshowers.org. We have hosted at least a dozen cyclists almost every year and haven't had a bad experience. We love meeting fellow travellers."

We eventually came to the conclusion that what seemed like common sense to us was perhaps not common sense to all and we might be in a good position to offer guidance to both bicycle travelers and the people who host them.

It is our intention to facilitate a conversation amongst cyclists and hosts here — and within the Warmshowers community — to create a set of guidelines to be helpful for all.

We encourage you to participate with us by sharing your experiences. Do you have a set of rules you go by when hosting or asking for accommodation? What else do you think is pertinent to the conversation? You can comment on this post, email your responses to me at jhmilykoATadventurecyclingDOTorg or send a tweet to @acaroutes.

I've been a warmshowers host twice, and enjoyed the experience. Interesting meeting new people and learning of their voyages.

We've had the odd pleasant experience when camping on bike tours, like a camping warden offering us to sleep in a camping hut rather than pitch our tent when it was raining the literal cats and dogs, and not even accepting payment for that extra service. Fortunately, we have yet to experience the need to totally rely on a stranger for help.

On the other hand, we have registered our small guest apartment, which we hold for visiting relatives, on the warmshowers website, and have indeed had the most pleasant guests through that, including a Taiwanese couple who cooked a full Chinese meal _for us_ in our house!

We never had a bad experience, but some no-shows or communications that were discontinued, probably because people on the road inquired but did not give enough notice to be contacted back. (Our city has a major international airport, and if, say, a Mexican travelling to Europe inquires three days before his arrival, he must obviously depart from his hometown pretty much right after the inquiry. If a return mail is only sent the next day, he won't receive it on time, he'll already be on the plane.) A warmshowers host may not be renting out regularly, and may need a day to prepare the accommodation, or he may only check his email once a day, and only answer the next day. So unless it is an emergency, allowing for a bit of planning time helps. - Of course, if a cyclist stood right outside in the rain totally unannounced, we would manage to deal with that as well...

Good response Tom. People have to be patient when dealing with bicycle travelers, since a lot of things happen when you travel slowly and without all the amenities of petro power. Phones go dead, get lost, weather turns ugly and many other unexpected things happen. My guess is 95% of all WS travelers and hosts go out of their way to live up to their commitments and those that don't get marginilized quickly. Most of theses people aren't type a personalities so treating others like you would expect to be treated is the way to go.

for the most part bicyclist are jerks. i understand why people don't like us. here are things that go in my neighborhood. unnecessarily scaring horses, hikers, and holding up traffic, littering. giving the conciseness cyclist a undeserved but understandable bad name

Would have to strongly disagree with you Dee. I have been hosting cyclists from all over the world for over 3 years now and it has been really wonderful. A few have left a bit of a mess behind but most have been great at helping to cleanup after dinner and even stripping the bed. Your cyclists may be locals, even young kids but the true adventure cyclists are a different breed entirely. I almost hate to see them go sometimes. Have a little more faith in humanity and try to be a good host sometime. You will be rewarded for it.

Warm showers is not a great web site to use has a statistical model. If you look at weeky number of postings to site. Maybe 4 to 5 a week.which you can't get much from!

Don't be discouraged if you aren't contacted regularly. I live in Minnesota far from the usual cross country routes and have been on WS for over three years and have only hosted once. That was because of my proximity to the Amtrak station, the start for the Mississippi River Trail for 2 cyclists. The chance to host was a very rewarding meeting with a couple that I hope to travel with in the future. In my mind, worth the wait and the minimal cost to provide a safe and restful place for like minded travelers. Every time I read a blog or posting about a host or a traveler, they have all wanted to "play it forward" for the warm reception and gracious folks who make this happen. We need everyone, even if it is only 3 times in 10 years.

While the Warmshowers site may not appear active, from what I hear the community itself is quite active hosting cyclists regularly. I'm guessing the site activity is screened behind the private messaging service. Do you have another resource you use for hosting or looking for hosts? I'm glad to hear your experiences have been positive.

I am 69, I have ridden several solo tours through the years. I have been offered a resting place many times. I have always thanked the kind folks. Have been off the road now for a year, and when I"ve met fellow travelers here in las cruces, have given them a place to shower and fed them plus good quarters for a few days at a time. The 1st of June I"m leaving my apartment and heading up New Mexico to Baker City,Or. and picking up the Transamerican heading east. Been my drem for many years and looking forward to meeting other like minded people. Recently heard about Warmshowers. Think that riders should always should be kind to all those that offer us their hospitality.

Robert, I'm glad you've had good experiences hosting and being hosted as a traveling cyclist. Kindness begets kindness. Warmshowers is a good find, too. Enjoy your upcoming trip!

Having cycled the TransAm in 2011 and used Warnshowers I appreciated whatever was offered. Some fed us, some offered a rest day if we desired it. One offered only a garage floor to place on air mattress and sleeping bag on. ALL were greatly appreciated by us. When hosting at my house I try to go out of my way to provide a good place to rest. It is my way to repay the kindness of those who helped me when I cycled. I have not had a bad guest yet and hopefully never will. Remember the host is offering something to you, to give you a reprieve from the daily grind. You are not paying for a service and should not make any demands. You can make a request, but it is the host who decides. Appreciate the goodwill jester they extend. Say thank-you, send them a card at the end. Be respectful. Common sense.