An Interstate Highway Walks Into a Bar 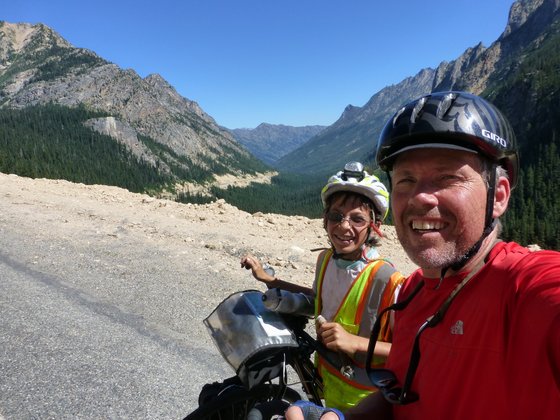 I've had the privilege of getting to know Zeke Gerwein over the last year. He introduced himself via an email message with the subject: crazy request from a thirteen year old fan.

My column in the June issue of Adventure Cyclist tells the tale of how I ended up a part of one of Zeke's adventures. A feature about our journey together is in July's issue. If you are a member of the Adventure Cycling Association, that issue should have just arrived in your mailbox.

In a word, Zeke is extraordinary. He walked all the paths of Berkeley, CA (36 miles worth) in one day when he was twelve. Later that year, he pedaled from San Diego to Seattle via the coast ... the hard way, from south to north. At thirteen, he pedaled from the border of Mexico to Canada via Adventure Cycling's Sierra Cascades route, arguably, one of the most difficult paved cycling routes in the United States. I accompanied Zeke from Mt. Rainier to the border of Canada and then to Seattle.

While we were pedaling together, Zeke was able to display one of his many talents ... telling truly horrible, groan-worthy jokes. Here is just one in his "bad jokes arsenal".

An Interstate Highway Walks Into a Bar

Now that you've groaned over that joke, think back to what you did with your summer vacation when you were fourteen. Zeke is keeping busy. He's probably in Missouri right now. He began in Delaware. Yep. Zeke is pedaling cross-country from east to west. As I said, extraordinary.

I'll have the pleasure of riding with him again. I'm meeting him in Zion National Park in August, and we'll pedal to the West Coast together.

I laughed out loud... the joke is especially suited for adventure cyclists!