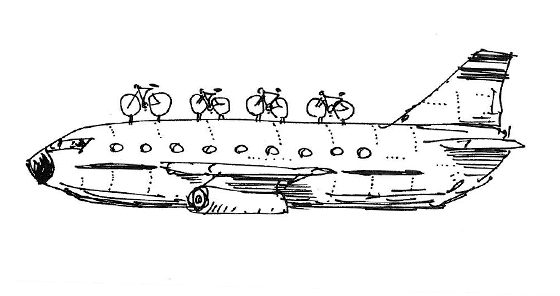 Traveling with your bike can seem daunting if you’ve never done it before and getting your bike (and other gear) to and from your tour is often the least enjoyable part of bicycle travel. Fees on trains, planes, and busses tend to be expensive, if bikes are allowed at all, and then there is the challenge of cramming your bike into a box and crossing your fingers that it arrives unharmed and on time. It seems like everyone has a tale of woe when it comes to transporting bikes.

Multimodal connectivity is a hot topic these days. Amtrak has been at the center of exciting developments with future roll-on bicycle service and Adventure Cycling has jumped aboard to help lead a Bicycle Task Force partnership. It may be the number one issue that we hear about from cyclists, and we’re happy to be making progress. Train travel is fun, and the thought of rolling a bike on and off without all of the red tape brings sheer joy into the hearts of cyclists.

But we cyclists dream big, so why stop there? Air travel is the quickest way to get around, and despite the ever increasing fees and other headaches, it can be the most convenient for those with limited time. However, airlines and airports seem to make it inexplicably difficult to bring your bike along, with expensive fees, varying restrictions, and lack of bicycle-friendly accommodations. A recent Washington Post article outlines some of these challenges and fee increases over the years. 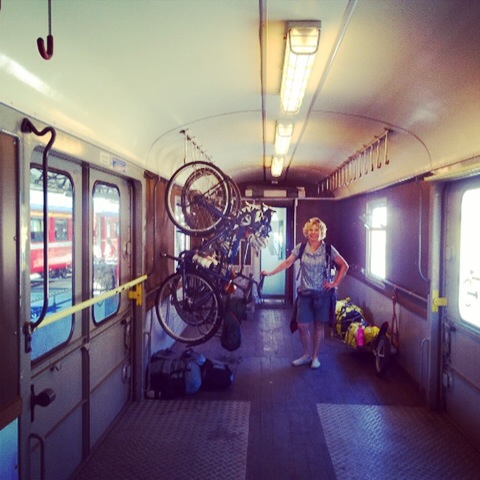 Why are there so many challenges to bringing bikes on planes? Many of the challenges are what you might expect: bike boxes are unweildy for airport staff and the cardboard ones are often not enough to protect the bike from damage, especially in inclement weather; the boxes are difficult to load as cargo because no luggage can be placed on top of them; and there are obvious space constraints. Due to new TSA rules, the TSA can open your bike box at any point to do an inspection, and there is no guarantee that they will repack it in a satisfactory way. They have to be carried out to the baggage claim area, adding an extra step for the airport staff, because baggage claim doesn’t have a way to accommodate them the way they do with other equipment.

Airports seem to be more open to bicycle-friendly improvements and accommodations, generally in response to local demand. Some airports, including the District of Columbia, Denver, Pittsburgh, Portland (PDX), and Oakland, now have bike trails to and from the airport to allow airport employees to arrive by bicycle and to allow travelers a cheaper way to leave their transportation at the airport, saving precious car-parking space. The Portland airport (PDX) has a bicycle and pedestrian plan and has implemented showers and lockers for employees who bike to work, secure bicycle parking for those who aren't bringing their bikes with them; a bike assembly and repair station with tools, which allows easy assembly and disassembly of bicycles at the airport; resources on local bicycle travel; and the TriMet trains from the airport include bike hooks and connect to other transport lines across the Portland metro area. The Los Angeles airport (LAX) is also trying to add bike paths and bike parking and raise awareness about commuting by bicycle. However, while many airports are interested in bike-friendly practices, airlines tend to call the shots when it comes to baggage fees and internal infrastructure and often prefer to prioritize spending on new terminals, rather than bicycle infrastructure.

So is convenient and affordable air travel with bikes even a possibility for the future? Well, as bicycle touring, active transportation, and multimodal connectivity trends keep growing, there are a lot of opportunities for airlines to jump on board in a similar way that Amtrak has. Amtrak now understands these trends, the demand for bicycle accommodations and the economic impact of cycling customers, and they have received overwhelmingly positive feedback and excitement about their new baggage cars with bicycle racks. Change happens slowly, but we eventually hope to work with air travel companies to identify solutions for bringing bikes on board in a convenient and affordable way.

I'd like to see a post where it shows how you can link up from Amtrak routes to maps published by Adventure Cycling. One of the big issues for me is getting my bike there.

I've biked from central Holland to Belgium, and had no trouble taking trains back to my origination point. That just won't happen in the US (yet).

I have been reading about new Amtrak initiatives for bikes on trains. While I find this news very exciting, I have a few questions.

1. What provisions are there for transferring bikes between different trains? example: Kansas City to Boston requires a transfer in Chicago from the Southwest Chief to the Lakeshore Limited. This is currently done by baggage handling of my boxed bike. What happens with the new system ?

2. Is there any plan to INCREASE the number of stations where an unboxed bike can be put on/taken off? For example: I leave Kansas City and want to get my unboxed bike off in Fort Madison, Iowa to ride back to KC. Will the new bike baggage cars and no boxes allow for more on and off?

I have used Amtrak frequently both as a passenger with boxed bike and for shipping my bike. I have often boxed my bike and generally been quite satisfied.

So, for me to be really happy with the proposed change, the service needs to be at least as convenient as it is now, preferably better. That means that my bike can pass easily from one train to another and that there be more stations where bikes can board and de-board.

Thank you for a thoughtful post on the subject. This is reminding me of experiences hauling bicycles to and from Europe in 2011. I packaged up my bicycle in a hard-sided plastic case, which was incredibly heavy and unwieldy to drag around Europe. My boyfriend packaged up his in a reinforced cardboard box, which was fine until it rained, the box got soaked, and it disintegrated. On arriving in Amsterdam, we set out to find a bike bag so he could more easily haul it on the train to Paris. His bike went home in the bike bag as well, and if I recall correctly, reached its final destination without any problems.

That kind of makes me wonder if what might be better overall is a change in customer-airline relations - get airlines to see bicycles as objects like strollers, which are also fairly bulky, fragile, and awkward, but which are easier to handle because they aren't packaged up in a huge box. They would still require special handling, but might work better when mixed in with other luggage.