Amazing Encounters on a Lonely Trail 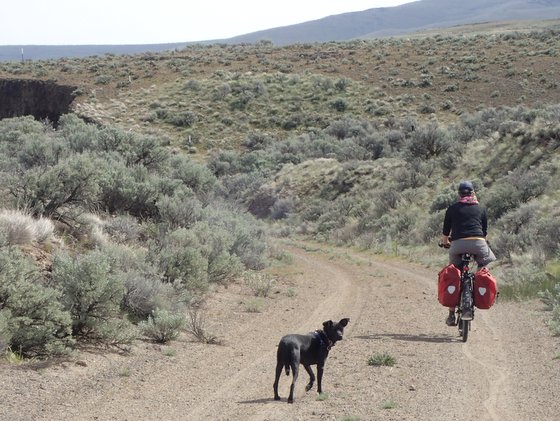 Last month Kat and I pedaled a section of the John Wayne Pioneer Trail in Washington State with our dog Tiva. This trail follows the old Milwaukee Road railway, and the surface runs the gamut from smooth to questionably ridable.

This short trip was a reconnaissance mission to figure out if we could ride the whole trail, around 285 miles, using a trailer to transport our dog when she wasn’t walking or running.

We rode a 22-mile isolated portion that runs through the Army’s Yakima Training Center. The landscape is beautiful, but harsh and dry, with lots of sagebrush. The old rail line goes through several cuts, carved out of the rocky landscape and we had to walk our bikes through several sections due to rock fall.

It was during one of the “slow go” sections that a large bird flew out in front of Kat. It had a wide body and it’s wing flaps were silent ... a great horned owl. Kat instinctively looked up from where the owl flew and there, high up on the rock wall, was the other adult owl and a tiny fuzzy owlet sitting stone still. 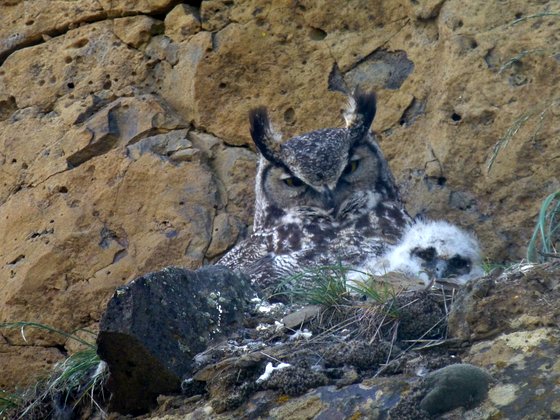 We never would have seen them, but for the flight of the other owl. We stayed still and quiet. Kat took some photos, then we moved on, careful not to disturb these magnificent birds.

Our outing was a success, and we determined that we could attempt to ride the whole trail together, people and dogs.

So a month later, we tackled the entire route, and once again, we passed through the same cut. We gazed up at the walls, looking for the nest, but a month is a long time in a bird’s life, and we weren’t going to see our little friend up there. Then there was flapping of wings on the ground near the end of the cut. I saw something fluffy and announced, “I think an owl caught a rabbit.” The bird in the distance looked like it couldn’t get off the ground. 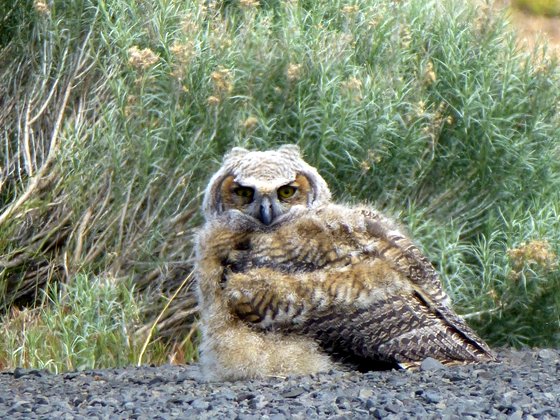 We grabbed the binoculars, a fairly heavy item for a bike trip that I insist on carrying, and lo and behold, there was our owlet, now an inexperienced fledgling. Kat was able to take some photos before it clumsily flew away.

Just another magical moment in the life of a bicycle traveler ...

The article of our travels along the John Wayne Pioneer Trail with our dog Tiva will be in the December issue of Adventure Cyclist.

What a great photo op with the owls; to get them again is just awesome luck. Fantastic story :D

Great story thanks .. will add this trail to my list .