Advice from a Food Desert 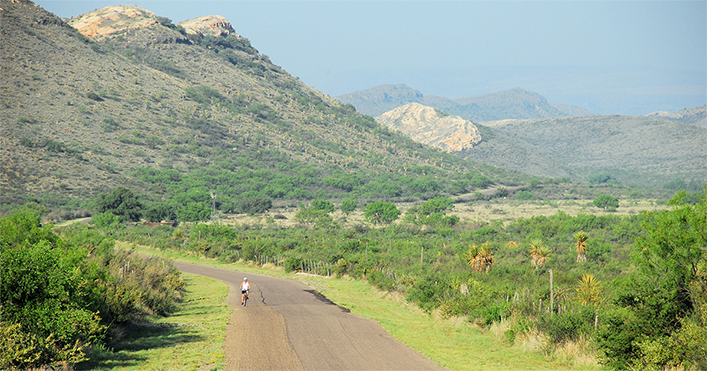 When Jim Sayer, Executive Director of Adventure Cycling Association, posted a thoughtful entry about food on Facebook during his trip on the Southern Tier cross-country bicycle route about Far West Texas this spring, I took note. I’d lived in the region for a decade, including five years on the Southern Tier route in Van Horn, Texas. And in my role as Executive Director of the Texas Mountain Trail, I spent plenty of time assisting cyclists who needed extra maps, a lift, or a good meal as they rode through our beautiful high desert mountains. Jim experienced some challenges riding through my former home, and we agreed a voice from the frontier might be helpful to other riders.

The 200 Mile Food Desert Now that we’re in Austin, Texas, birthplace of Whole Foods and (arguably) the modern food truck trend, it’s a good time to note the food desert reality in long-distance bike travel. Usually the term “food desert” gets applied to inner cities with no decent and convenient grocery stores. In West Texas, we had a 200-mile gap between Alpine and Del Rio with pretty much nothing but mini-marts. Remember that a traveling cyclist carrying gear will usually burn two to four times their normal calorie level. The options are daunting. You can carry a ton of (heavy) whole food, and I’ve seen some folks add 20–30 pounds to their load for that reason. There’s also freeze-dried food. Or you can overcome any foodie and health pretensions and go the heavily processed route, at least for a few days. Hence, you see most of my grocery purchases at a Stripes mini-mart. (The cashier looked at my haul and said, “You got all the good stuff.”) That route leads to breakfasts like one I had in Comstock: ice cream bar, Hostess apple pie, and frosted mini-wheats. It’s actually kind of liberating to throw health considerations out the window for a few days — but only a few days. Continuing to eat the way I describe while riding 70+ miles a day with 100+ pounds of bike and gear would kill me. Sometimes shopping at a convenience store raises serious moral quandaries. In the tiny burg of Dryden, which actually did have a little produce, I struggled a bit while I bought over half the town’s bananas (4 of 7), a third of its onions (1), while avoiding buying all its apples (1). Should I have bought that apple? What’s been your worst diet while doing extended adventure travel? 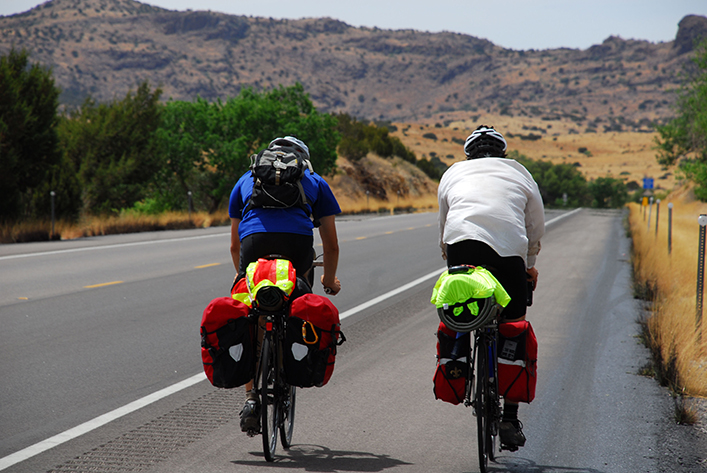 What you should know about the frontier

First, true frontier does still exist, and it is inconvenient at times. For example, Van Horn, Texas sits along I-10, a major east-west thoroughfare through the southwest. But it sits in vast Culberson County with its 3,800 square miles and a population of about 2,200. That’s the same population density that Austin had before the Civil War. Think of it ... you’re attempting to cycle through a land that, in some respects, IS the 1860s.

Out of necessity, there’s a stronger need for community and self-reliance in frontier towns.We have our own way of getting good food, and that usually involves a monthly trip to the city. The drive can take two to three hours one way, but with a few coolers with ice and dry ice in the back of the pickup for produce and perishable items, we do just fine.

That said, food delivery in small remote rural towns can be inconvenient and sometimes there are gaps on the shelves. Shortly after I moved to Van Horn, everyone in town got sick at the same time. Our only grocery store quickly sold out of chicken soup, chicken broth, chicken bouillon, noodles, and … chicken. You know you live in another time when you hear your neighbors say, “We’ll get all that stuff when the semi with the food comes to town next Thursday.” We learn to roll with it, and invite you to acknowledge the rarity of the experience, and roll with it too.

Frontier dwellers know the neighbors with the best gardens and farms for pecans, peppers, and onions, and who makes the best tamales and enchiladas and menudo. Giving and sharing is a way of life; you’re expected to give, and there’s no hesitation to ask for a favor, either. Locals will take orders from their neighbors, “I’m going into El Paso to shop for the day. Anyone need anything?” The response might be, “Would you go to Walmart and get my daughter a pair of shoes, size 4? I’ll text you a photo of the shoes we want.” Such requests get fulfilled, even if they’re inconvenient; that’s how we do things in Far West Texas. We lean on each other, and we’re unlikely to need that Hostess pie in the dusty container at the mini-mart.

So go ahead. Buy it if you’re hungry. We know that as a traveler, you’ll experience our towns without that safety net. If that bothers you tremendously, consider staying with a Warm Showers family where you can. There isn’t a Warm Showers home in every community yet, but you might have some great tamales waiting for you when you roll into town.

And a side note: please DO support our local hotels and motels. The room tax you pay makes a huge difference to small towns by providing funds for historic restoration, arts programs, community support, and in some states, emergency services.

Plan rural stretches of your journey carefully, and be sure to stock up when you’re in the city. You will need the nutrition. The 19th century soldiers in Far West Texas carried quite a bit of food with them on horseback, and you should carry more than you need on your bike. Matt Walter, Curator of History at the Museum of the Big Bend in Alpine, Texas notes, “The daily ration was around 1 pound of bread, which was replaced by hard tack while in the field; one pound of meat per day, which was often replaced with canned meat — or, if they got lucky, wild game — in the field; four ounces of bacon, and one pound of beans.” Load up that bike. You want to be ready for anything.

The weather — especially the wind — can mess up plans, so be prepared by carrying more than you might expect. Laura Crawford, of The Path Less Pedaled, blogged her challenges with food on a trip through Far West Texas, and summarized the lessons she learned in one statement: “The biggest thing is simply that we now always carry extra food.” Laura continues, “We hit some truly incredible headwinds and storms on that stretch between Marathon and Comstock, which lead us to eat through our stash of food much quicker than planned. We left Marathon with five days worth of food, enough to get us to Del Rio, but the weather didn’t cooperate. I think we did 50-ish miles to Sanderson, then another 50-ish into Langtry, both days into a crushing headwind. By the time we left Langtry, we had eaten through almost everything.”

Understand the limits of the community

We know travelers are sometimes disappointed by our restaurants and grocery stores, so let me address the issue of “service” in a small, remote rural community. Folks tend to wear many hats and have duties and responsibilities beyond what outsiders might expect.

Gilda Morales in Van Horn is an owner of the Cactus Cantina restaurant, works at the hospital (she’s a doctor of chiropractic and a nurse), plays in a band, serves as a county commissioner, and is on countless boards. She’s involved in church, owns the local newspaper, and in too many groups and clubs to count. Whatever Gilda does, she does out of a love for her community. Someday, Gilda’s going to get tired of doing everything. Without her, the town might not have that band or the restaurant. Eating establishments come and go, and sometimes they go due to simple fatigue.

When travelers see “Closed on Sundays” signs, they may not realize this: the closures could mean much needed time away to deal with family illness or challenges hiring and supporting employees. Funerals will often close an entire town’s businesses for a few hours. “Closed” signs don’t always mean a failure in that community. It may be a sign of a “pitch in and support your neighbor” culture that should be understood, appreciated, and even celebrated.

Leave the frontier with a new understanding of this country

You’re traveling to learn a few things, experience other cultures and other ways of life, right? Our remote communities give you miles of quiet and beautiful land for your journey. We give you a time-travel experience you just can’t have back home. Again, Laura Crawford of The Path Less Pedaled sums it up so well:

“The other thing that happened is that I had to re-think my assumptions and convictions about food, and learn to be flexible. We loved so much about West Texas, and it still stands as one of our favorite places we’ve traveled, but we had to be okay with the food options that existed. A small town market has a limited number of options, and we had to work with it. It’s something that we continued to experience during the rest of our travels, but it was definitely those challenging weeks in West Texas that most pushed us. And that lesson has been enormously helpful over the past many years of working and traveling in rural places. I can now walk into a market and assess what is and build a meal from that, rather than lament the lack of something and get hung up on what I wish they had.”

So, please DO ride out in beautiful Far West Texas. Enjoy the quiet of the mountains of the Southern Tier in Texas and the peace and grace of our communities. If you keep your eyes open you’ll see things you’ll never see in the city. Soak up the experience and understand just how rare it is to experience a true frontier today. Plan well, stock up, eat heartily, and enjoy the adventure. 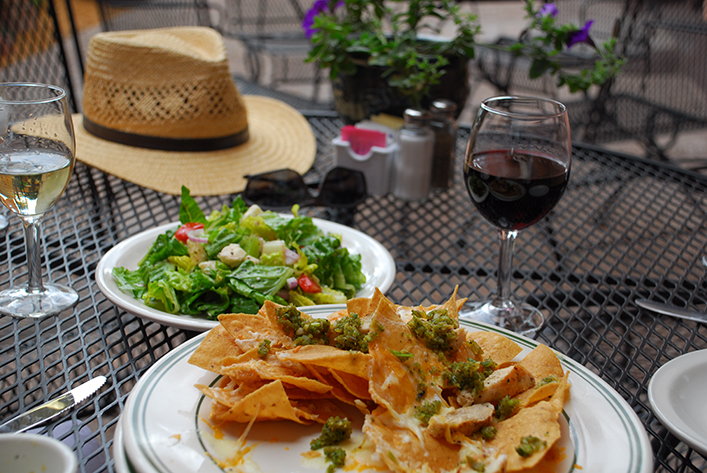 Well said Beth! Even car traveling can get tricky at times when you're expecting to eat out but nothing's open Monday or Tuesday. I really like the perspective on why something might be closed at what could be an inconvenient time. It's definitely part of the charm of that region and part of the excitement of having to improvise. It's the trade off you make for having some real quiet and being able to look out at no human impact for miles and miles and miles.