Adventure Cycling's January Member Drive has officially begun. First-time members who join online in the month of January will receive a free 2016 Adventure Cycling calendar with their membership packet, entry into our Salsa Marrakesh bike giveaway, as well as entry into our weekly product giveaways — compliments or our corporate sponsors.

When you join Adventure Cycling, you’re not just joining a group of more than 48,000 cyclists, you’re also helping support our work to create and maintain the Adventure Cycling Route Network — the largest of its kind in the world. If you love to travel by bike as much as we do, we likely have a route for you. As for how you tackle one of our routes, that’s entirely up to you. One trend in bicycle travel that we’re watching explode right now is bikepacking. 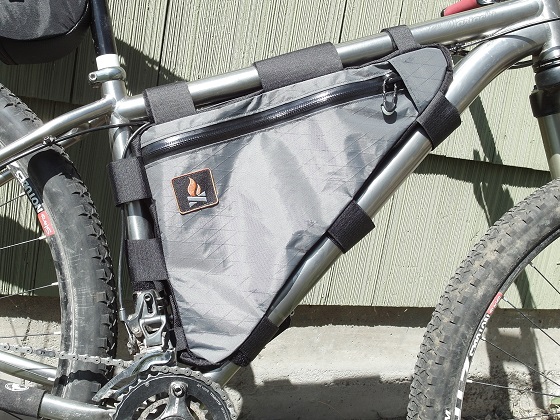 If you’re not already familiar with bikepacking, the approach is to strap gear to your bike frame instead of a rack with frame bags, seat bags, and handlebar bags. You can apply this method of touring to any type of bike, whether it be road, mountain, cyclocross, touring, or even fat bikes. I could yak all day about this but it might be best to point you towards some articles we’ve published on the matter, such as a bikepacking trip in the Tobacco Root Mountains of Montana, and another adventure to Knik Glacier in Alaska.

No matter which method of bike travel you decide to undertake, we’re giving away some great cycling gear to a few lucky new members who join Adventure Cycling by Sunday, January 11. These products were donated by our corporate members, Osprey Packs and Bike2Power. 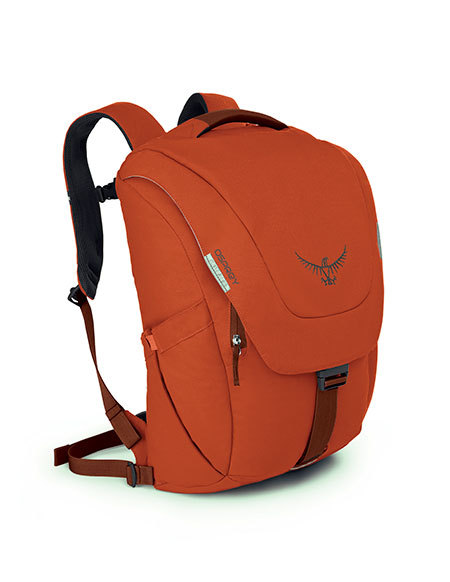 Looking to upgrade your method of gear stowage on your next ride? Osprey Packs has your back with the new FlapJack and FlapJill Packs. You won’t have to sacrifice style or functionality with these suave looking packs with smart features such as reflective graphics and a blinker-light attachment point. We love Osprey Packs here at Adventure Cycling because like us, Osprey has been providing folks with the opportunity for adventure since way back in the mid-1970s. Osprey packs feature unmatched quality, but if you happen to damage your pack for any reason, Osprey will repair it free of charge. Now that’s great customer service! We’re giving away one of these packs — FlapJack for him and FlapJill for her — during our January Member Drive, so join today! 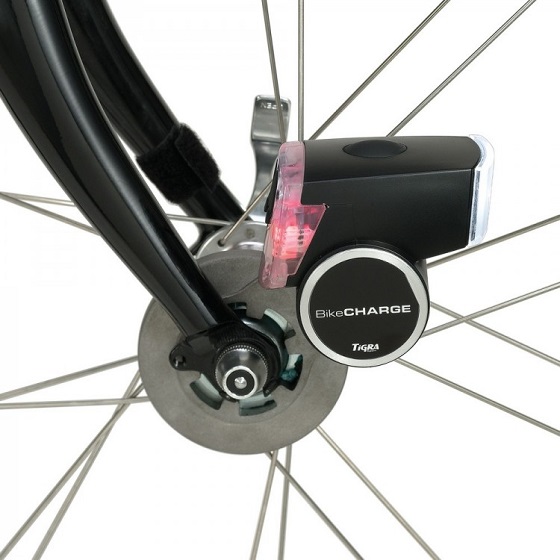 Take a gander at the bike-parking area at Adventure Cycling headquarters and you’ll be hard pressed to find a bike not equipped with lights from stem to stern. The real savvy commuters know the best way to illuminate your ride, and power up your devices, is through the use of a dynamo generator hub.

Have you ever wanted to try a dynamo hub but haven’t been willing to take the leap into a full dynamo set up? The BikeCharge Dynamo is a small mountable generator with an integrated USB 2.0 port, an 1000mAh battery, and front and rear LED lights. It can be installed on either the front or rear wheel hubs of most wheel sets in 5–10 minutes and uses the rider's own pedal power to charge their devices, such as smartphones, bicycle lights, bike computers, GPS units, batteries, cameras, and more.

The weatherproof Dynamo's internal battery is fully charged after approximately 2.5 hours of pedaling at 12 MPH, and the built-in lights can be adjusted for multiple angles and lo-beam, hi-beam, or blinking modes. It’s virtually drag-free and very quiet, and controlled with a small remote button.

We’re giving away one of these nifty devices from Bike2Power during our January member drive, and if you join now, we’ll enter your name into the drawing!

MEMBERSHIP HIGHLIGHTS is posted every other Wednesday by Josh Tack & Brian Bonham. Membership Highlights spotlights the various benefits of membership, our accomplishments thanks to member support, and even interviews with some of our most passionate and dedicated members, both individual and organizational.

Hi, Kirts- Feel free to reach out to me regarding fundraising initiatives. My email is my first initial, last name @ adventurecycling.org.

Thanks for your support and happy new year!

I would love to join again, I had a gift membership several years ago, but my VA disability income is tapped out for this month. I may have the funds in February. I also would like to talk to your chief fundraising officer about a no cost fundraising program I offer through my Best 14 Fundraising. for Non Profits. I look forward to working with you. kirts