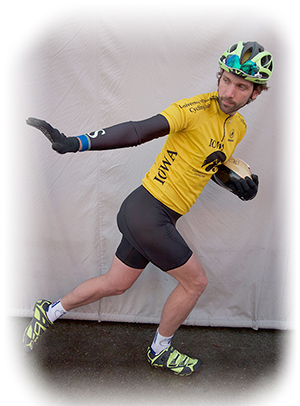 College football bowl matchups were set earlier this week. In years past, I've selected winners based on breaking down team stats, choosing my favorite mascots, and even going with favorite colors. This year, I'm taking a different approach and picking winners based on how many Adventure Cycling members each team has within a 50-mile radius of their home stadium. Here's a look at how that all pans out:

Based on my projections, it's looking like another good year for the Big Ten, although as an Iowa City native, I'm not super happy about seeing the Iowa Hawkeyes get trounced by Stanford.

Don't like how your team fares either? This is a good time to improve their chances during our 1/2-price holiday gift membership campaign. Join or renew your membership at the regular price, and give as many gift memberships as you want for 1/2-price.

We'll be revisiting this list after January 11th to see how well these picks performed.

You get points for using that word in a sentence.

I haven't checked Josh, but you didn't list the corporate johns who bought the naming rights for 2 of the match-ups. Did those games lose their naming rights sponsors? And as a result of reviewing the list I see that a certain chip company is no longer naming a game. However, once a naming rights corporate john, always one and as a result, I go out of my way TO NOT PATRONIZE those companies. Yeah, it gets harder as each day goes by, but I do what I can. You'll notice that the Rose Bowl does not have a title sponsor, but a presenting sponsor. They get less money that way, but I guess they see it as hey, our name comes first and not the company. I didn't look but I'm guessing no New York City schools are playing, correct?

And, Josh, your method is as good anyone else's since, as we all know, on any given day, any team can beat any other team. If I happen to be someplace and the Rose Bowl is on, I'll root for your team.

Thanks for the exercise.

That's a good call adjusting for population. I might have to revisit that idea when March Madness rolls around! In either case, it was a good exercise in looking into our membership distribution.

As for the BYU-Utah match up, there's definitely a lot of overlap, but BYU is far enough south that they don't catch the north end of Salt Lake City. I used stadium zip codes as a central point, and Utah's turf was in the sweet spot.

Very fun analysis. Reminds me of Woody's system (from the old show Cheers) of picking NFL games based on mascots.

Further questions: should you adjust for population? 50 mile radius of Northwestern is pretty much the entire Chicagoland area, which is obviously much higher than the greater Knoxville, TN area. (Though I'd much rather ride in TN than the concrete jungle of my hometown). USC and Stanford are similarly-skewed. Adjusting for population of Stanford's radius might just give your Hawkeyes the boost they need!

Utah vs. BYU is interesting. Where/How did you choose the cutoff for those two? Their home stadiums are less than 50 miles from each other, so the radii overlap significantly.

This is lots of fun. And I just used "radii" in a sentence.