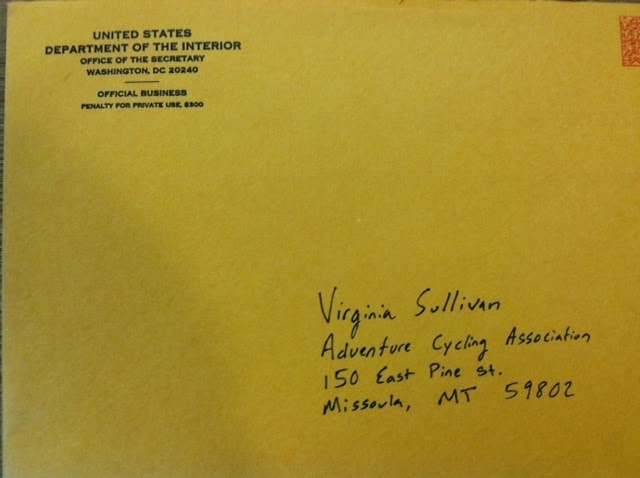 Last week, we received a package from the Department of Interior. Adam, my colleague, snapped a photo of the envelope and posted it on Facebook. Wow! We didn't realize how excited our supporters would be to know that the final version of the national agreement between Adventure Cycling Association and the National Park Service was finally in hand. Thank you adventure cyclists! We are excited too. 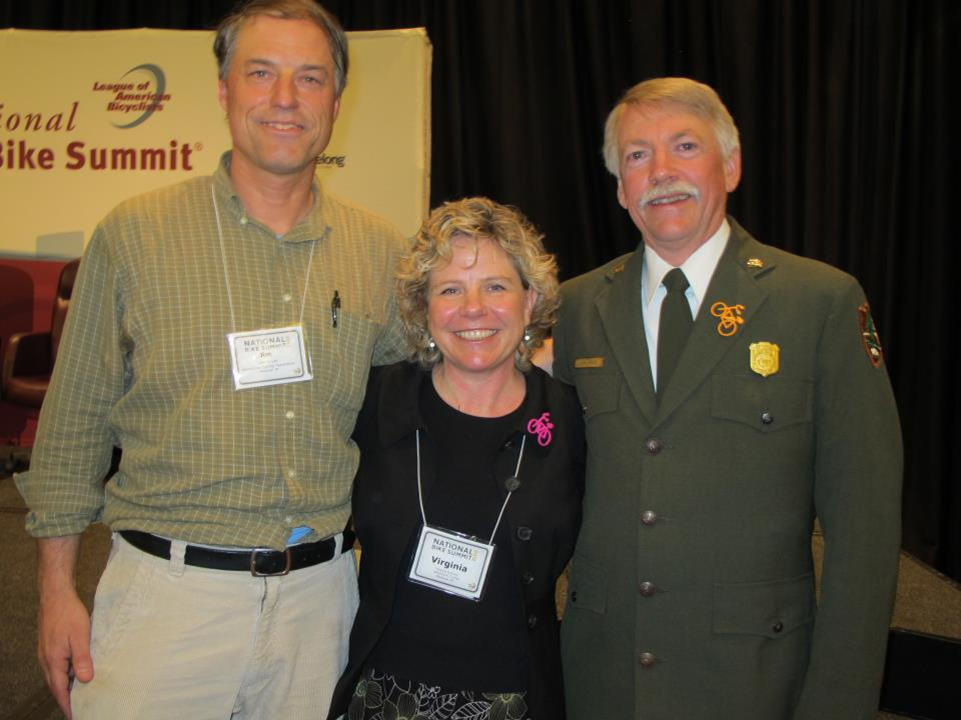 Once the agreement is signed by Director Jarvis (pictured above with me and Jim Sayer) and filed, we're looking forward to working on a number of projects, including:

Designation of U.S. Bicycle Routes that will bring cyclists to National Parks or, in some cases, designation of routes through them. After all, National Parks are a key destination identified by the U.S. Bicycle Route System Task Force when developing the National Corridor Plan. These are amazing places that traveling cyclists are interested in experiencing. Helping nurture that experience in partnership with the parks will be very exciting. We can't wait to get started.

BUILDING THE U.S. BICYCLE ROUTE SYSTEM (USBRS) is posted by Ginny Sullivan, USBRS coordinator at Adventure Cycling, and features news and updates related to the emerging  U.S. Bicycle Route System. The USBRS project is a collaborative effort, spearheaded by a task force under the auspices of the  American Association of State Highway and Transportation Officials (AASHTO). Members of the task force include officials and staff from state DOTs, the Federal Highway Administration, and nonprofits like the  East Coast Greenway Alliance, and  Mississippi River Trail, Inc.

Please include in your initiative the promotion of Hiker/Biker campsites in National Parks. We live 50 miles from Crater Lake National Park and see many bicycle tourists. Our area is easy to reach via Amtrak for tourists from both California and northern California and has many attractions including Crater Lake. However, neither campground in the park has hiker/biker sites and the campgrounds frequently fill in the summer. I think all campgrounds should have options for the human-powered traveler who may encounter a "Full" sign at the end of a long day.

This is amazing guys! Sounds like great things to come in the near future as part of this agreement! We definitely enjoyed the Grand Tetons and Yellowstone on our last tour, and agree it will be so beneficial to encourage bicycle travel and awareness in a joint effort with the national parks!