A Trip to the Midwest: Update on Indiana and Ohio 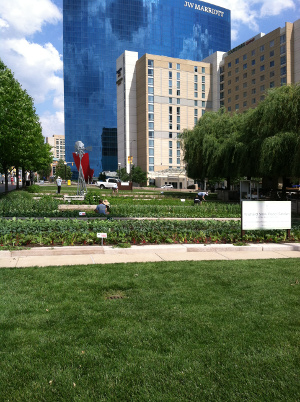 I had the opportunity to travel to the Miami River Valley Bike Summit this past week to speak about bicycle tourism and how the area can capitalize on their amazing cycling trails and infrastructure. Luckily, I also had the chance to leave Missoula a little bit early and meet with several United State Bicycle Route stakeholders in Indiana and Ohio while I was on the road.

Indiana is well into their efforts to designate USBRS 50 and 35. Advocates, municipal planners, and state DOT personnel are working together to coordinate routes and apply for designation. Meetings with the Indiana DOT and Nancy Tibbett of Bicycle Indiana reaffirmed both organizations' commitment to the USBRS. My time in Indianapolis ended with a bicycle tour given by the city’s pedestrian and bicycle coordinator, Jamison Hutchinson. Jamison was kind enough to take me on a tour of the city's freshly completed Cultural Trail. The facility is impressive with 8 miles of urban trail comprising pedestrian and cycle track. Connected to the trail are several of Indianapolis’s new bicycle lanes, including a fully separated bicycle lane and one cycling traffic signal. The historical trail is a testament to Mayor Ballard’s pledge to bicycling.

From Indianapolis, I headed on to Columbus, Ohio where I meet with several Ohio DOT personnel. Ohio needs to gain three more counties’ (out of ten) resolutions of support before they are able to apply for designation of USBR 50. First the bad news, the bicycle coordinator that completed the resolutions for the previous seven counties is no longer with ODOT. The good news is ODOT reaffirmed their commitment to finishing the project. With any luck, we should have a freshly minted USBR 50 in Ohio next spring!

After the ODOT meeting, it was time to head to the Miami River Valley Summit in Springfield, Ohio. I started by getting a tour of the off-road, paved bicycle paths in the valley. With 330 miles of these facilities, local trail advocates like to boast that the system is the largest, off-road, paved bicycle trail system in the country. The system connects Dayton and Springfield to the Cincinnati area and links several small communities along the way. The residents of the Miami Valley should be proud of their support and completion of these trails. After the tour, I had the opportunity to present to almost 350 people who attended the summit, quite an impressive turnout. The existing facilities gave me the opportunity to tie the trail system to the potential for promoting and tracking bicycle tourism in the area. 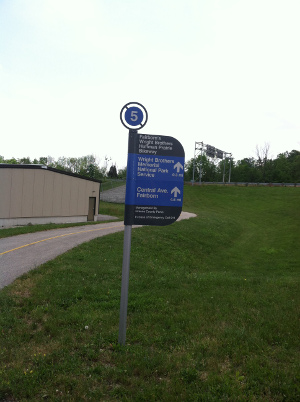 I was treated royally while on the road. Thank you to everyone that hosted me. I returned to Adventure Cycling’s Headquarters excited by the enthusiasm shown for the USBRS all over Ohio and Indiana!