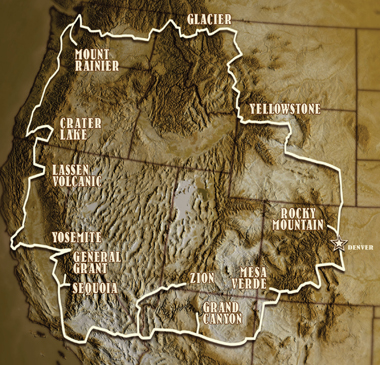 When I first saw the map above that accompanies the synopsis for PAVING THE WAY: The National Park-to-Park Highway documentary, I flashed on the blog post I wrote in December 2009 about A Killer Route Loop. 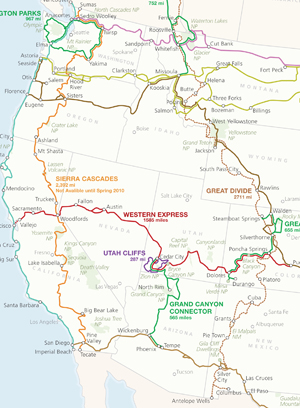 The film recreates the 5,000 mile, 76-day journey undertaken by 12 individuals via automobile in 1920 to visit twelve western U.S. national parks to inaugurate the National Park-to-Park Highway. The Killer Route Loop would use pieces of our route network to showcase a slightly different slice of the West. Both trips take in some of the most stunning scenery the U.S. National Park Service system has to offer west of the Mississippi River and are examples of the thirst for discovery innate in many of us.

While the rough and tumble road conditions of 1920 were more akin to those found on the Great Divide Mountain Bike Route than the rest of our network, the sense of adventure born on that Park-to-Park trek led to what is now expressed as the desire for at least one significant road trip in every lifetime. Today, the most curious of us - like Rachel and Jessica at Against the Grind - are seeking to find the new American road trip on two wheels instead of four.

By combining the Adventure Cycling Route Network and the resources in The Playground Trail - a written account of the original journey - an exquisite National Parks Loop road trip could be experienced by bicycle.

In this quote from the PAVING THE WAY trailer, I get the feeling that the pioneering folks of 1920 had an awful lot in common with the bicycle traveler of today: "It [National Park-to-Park Highway] goes places that you can't predict. It connects you to things you've never dreamt of, you don't know how it's going to turn out. You come back with stories. It's an adventure."

Sound familiar? It does to me. This is a recurring theme in nearly every bicycle tour blog I read. Long live the adventure-filled, pedal-powered road trip!

Rick: That's great! Without having seen the Playground Trail book I could only guess that the route might be pretty close to ones we've mapped out. I'm curious, which specific map sections did you use? And where were the gaps? Information like that might be useful to someone planning to do this trip.

Heyyo! As Reuben pointed out, I was the one who pedaled the Playground Trail, and oddly enough did so following ACA maps the majority of the way. I spent the entirety of summer traveling from park to park, visiting 14 in all, only one of which I'd been to before. I'm in full support of this route and would be happy to answer any questions.

Rueben: Yes! It looks like they followed the itinerary set out in the book The Playground Trail. What a great adventure. Thanks for pointing out the blog.

reminds me of following along with http://www.playgroundtour.com last year.