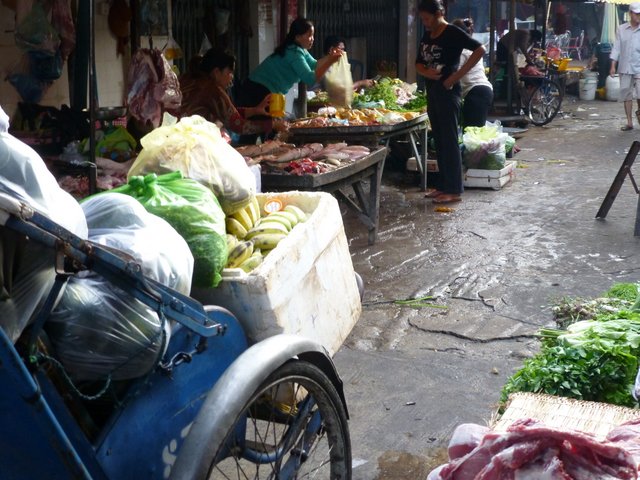 I was chatting with a couple I'd met in Minneapolis. Although they were avid travelers, they had only recently discovered bicycle travel. When I inquired further, they mentioned that they grew tired of riding on a bus and seeing people, places, and events fly by. They lost count on how many times they wished they could have stopped the bus.

We always refer to "riding a bike," but one of the bicycle's best attributes is its ability to quickly and conveniently stop.

Kat and I were in Phnom Penh. We pedaled upon a market and decided to check it out. There were hundreds of stalls, with everything for sale from soup to nuts, literally.

We noticed a man run through the market with something wrapped in a shirt. For a brief moment, I wondered if he had stolen something. But he ran up to a stall, and lifted the cloth covering to reveal a knife. On the table was the skinned body of a large pig.

We watched as this man went to work, and within minutes, using just the one knife, had parted it into primal cuts. As soon as he was finished, he wrapped his knife and sharpening steel in the shirt and trotted down to his next client.

We followed this freelance butcher around the market. I can't say that watching someone cut up a pig is my idea of a good time, but watching anyone who is a master at their craft is fascinating. Watch the clip below, and, if you are like me, you'll wonder how this guy still has all of his fingers.

If we had been on a tour bus, we'd have just seen the blur of a man running through the market.

A Market Master from Willie Weir on Vimeo.

Photo and video by Willie Weir and Kat Marriner

Ah, there's nothing as pleasurable in cooking like working with a super-sharp knife. Notice how he "topped if off" with the sharpener 3 TIMES during just this one job!