A Major TransAm Fix and a Major New Trail Destination

One of the great ironies at Adventure Cycling is that one of the most unpleasant sections of our legendary TransAmerica Trail is the 8-mile stretch between Lolo, Montana, and our home base in Missoula, Montana. Currently, cyclists have no choice but to ride State Highway 93 which, while having a reasonable shoulder, also has 70 mph+ traffic, some windy curves, and barricades that make getting off parts of the road impossible. We routinely get pleas from visiting cyclists: "Can you fix that #@*&%# part of the route?" Well as of last week, we can answer: "Yes, we have a fix!"

On September 5, the U.S. Department of Transportation announced its latest round of Transportation Investment Generating Economic Recovery (TIGER) grants, and among them was a $4.5 million investment in a separated, paved trail along Highway 93, from Lolo to Missoula. Design will take place in the coming year, and construction is planned for 2015.

Adventure Cycling played a major role in securing the grant, especially Director of Travel Initiatives Ginny Sullivan, who worked on the grant application (see the above clip from ABC/Fox Montana). We also wrote editorials and contacted our U.S. Senators from Montana, Jon Tester and Max Baucus, encouraging them to support the project. And we were joined by many fantastic local groups, from Bike/Walk Alliance for Missoula to Run Wild Missoula, and agency officials, including Jackie Corday from Missoula Parks and Recreation. 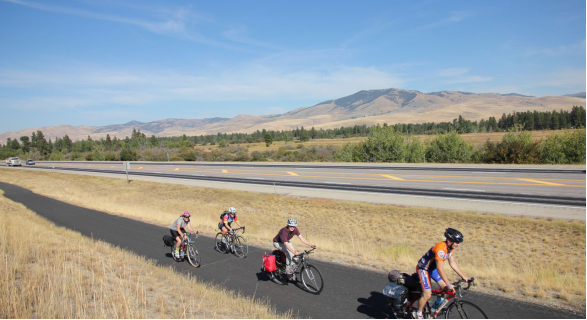 The new Missoula-Lolo trail will connect to existing trails, providing a
50-mile paved pathway from downtown Missoula to Hamilton, Montana.

This new trail will not only improve our TransAm Trail but also connect to a much longer separated, paved trail from Lolo down the beautiful Bitterroot Valley to Hamilton, Montana. Altogether, cyclists will be able to ride continuously on trails for 50 miles from downtown Missoula to the southern end of the Bitterroot. Based on the boom in bike tourism and travel, we project that this trail will be a major tourism destination for cyclists of all ages and abilities, especially families who want a safe, low-stress bike vacation option.

It will be a grand day in 2015 when the ribbon is cut and a new non-motorized pathway opens to cyclists and pedestrians to reach the mecca of bicycle travel: Missoula, Montana!

I remember that stretch of 93, did it in the rain in 2004, not a pleasant ride. Guess I'll just have to do the Transam again just to check it out!

After this is built will I still have the legal option to use the roadway?