A Long Journey to a Short Ride 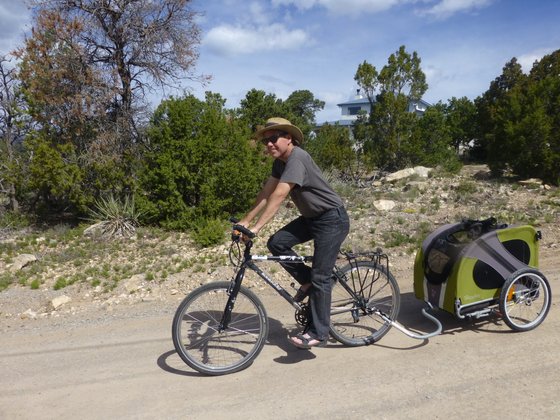 It was a journey of less than half a mile, but it took over two years to get there. Tiva, our reluctant traveler, finally took her first ride in a bike trailer.

And what a long journey it has been. Tiva came to us from Taiwan, where she was rescued from a ditch next to a garbage dump. We soon discovered that the chances of our dog every accompanying us on a bike trip were zero. She was so frightened; it took us two months to get her to walk one block in our neighborhood in Seattle. (For the longer version, you can read past posts The Reluctant Traveler and The Reluctant Traveler Update).

However, that didn't stop us from dreaming. We bought her a dog trailer with the realization that we might never use it. We set it up in our living room, where it sat as a treat deliver system. We would say, "load 'em up'" and Tiva would jump in and stick her head out the top for piece of pork.

Over the course of several months, we moved the trailer outside (still not attached to the bike). We got an attachment that allowed the trailer to convert to a jogger, and we slowly introduced her to it, always looking for signs of stress, and backing off when we did. Very often, we'd go out after midnight to avoid any traffic. However, we still hadn't attached it to the bike.

Then a great opportunity came, when friends asked us to housesit in the Sandia Mountains outside of Albuquerque. We brought our bikes and trailer (and Tiva) with the hope that a traffic free environment would do the trick.

We walked the route with her the first day. Then we put her in the trailer and walked the bike. After a couple of successful runs, we decided it was time to ride. Kat and I took turns pedaling the short route.

I'm sure that anyone within earshot who heard us gleefully cheering on our dog for the simple act of sitting in a moving dog trailer thought we were nuts. But I have to say, that short ride was as satisfying as any mountain pass I've ever climbed.

Our next big goal is a multi-day bike camping trip, far away from traffic, if possible. We've learned from experience that fear is best conquered in small doses. In the meantime, we'll celebrate our first half-mile. 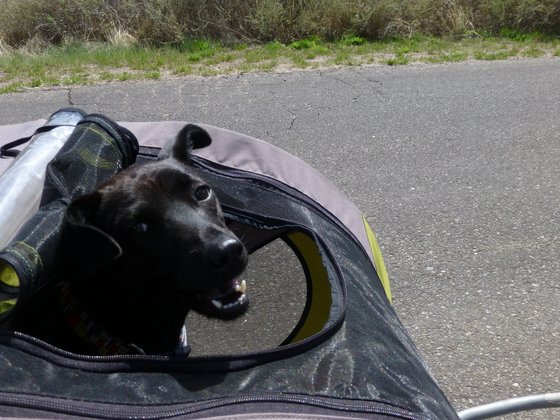 Congratulations! I finally did a 2 day ride with my little 19 month old Havanese riding in a cart. We did 40 miles one day and 20 the next. We camped overnight by a river where he enjoyed a swim. He did do some howling, like he was being tortured, but my riding buddy said he was laying down with his head on his pillow looking out the door and was not dragging on the ground! He's a dramatic boy! I'm going to look at "doggles" for him to protect his eyes from road dirt as a fender isn't an option and he hates putting down the screen or clear rain flap. I'm an avid cyclist and hope Habi will become one too! Good luck!