Adventure Cyclist 3.0 starts now, and in the months to come there will be much more to keep readers engaged.

The first issue of Adventure Cyclist produced using the new design has been printed and will soon be meandering it’s way through the mail stream and will reach your mailbox between May 6 and May 9. Our printer was kind enough to send us a dozen advanced copies and, I must admit, seeing it in its printed form for the first time has been quite a thrill for everyone involved. We’re all very excited about the future of Adventure Cyclist and we hope you’ll be as thrilled as we are once you’ve seen it. 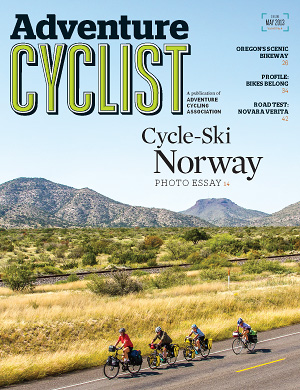 While deciding which stories to publish in this milestone issue, I settled on an idea from Brian Mohr and Emily Johnson of Ember Photo. They proposed an article about their impending bicycle-powered ski trip to Norway, an idea I liked. But I remembered “Corn Snow and Open Meadows,” an article we published by longtime Adventure Cycling staffer Michael McCoy in the April 1994 issue about cross-country skiing. The gist of the article was about skiing to stay in shape over the winter while not cycling. Well, it went over like a lead balloon, so I was a bit gun-shy. But after thinking it through, I realized it’s really a perfect bicycle-travel story. This group of avid skiers used bicycles as their means of travel and transport, and isn’t that what we’ve been promoting all these years? I’m hoping we’ll find more stories like this in the future. It’s fun to imagine what other activities people could ride bicycles to see or do! 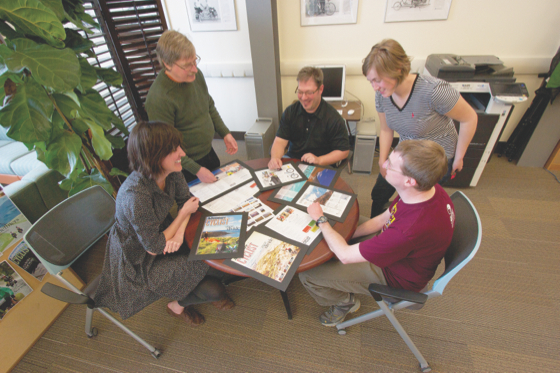 I started putting a redesign of Adventure Cyclist into Adventure Cycling’s pot of dreams in 2009, but each year, it didn’t get to the promised land — until 2013. Even as I write this letter, it’s a bit hard to believe that we’ve already produced and published this inaugural issue of Adventure Cyclist 3.0. Is it perfect? Not by any means, but I’m proud of the work that’s been done by the entire publications department, along with our partners at IridiumGroup, and I’m happy with the results. We fully understand that not everyone will be happy with it — we’ve been through this before — we just ask that you try to keep the comments civil if you’d like to provide feedback. Meanwhile, like a brand-new bicycle, we’ll continue to fine-tune and enhance Adventure Cyclist as we move forward into a new era.

Photo of the Adventure Cycling publications team by John Sieber

I'll send you the last two issues and pass your question on to Adventure Cycling's memberships department.

How about also giving the option to distribute the magazine in digital form? There would not be any postage and nothing to fill up our landfills. Perhaps a digital edition could be offered in addition to the paper version. Then we who are on a long-term bicycle tour could also enjoy them by accessing them via our laptops, iPads, etc.

That is a great idea, hope they initiate it.Too much waste with newspapers and other forms of media!

A PDF has been available for quite some time via My Adventure Cycling and, starting with the June issue, a digital version will be available to Adventure Cycling members through Mozaic. You can check them out here: http://www.halldata.com/services/digitalmagazines. A digital-only membership is currently being researched. For more on that, check in with Adventure Cycling's memberships department.

You have my full attention, Michael.