A Closer Look at USBR 50: The C&O Canal Trail

“Harpers Ferry has always been a place of connections: the meeting place of two great rivers, the North and South in the Civil War, a midpoint for hikers on the Appalachian Trail, and an important stop on the old B&O Railroad. The USBRS will add to those connections and bring more and more travelers arriving by using their own power. We’re happy to add them to the mix!”

- Chris Craig, owner of Laurel Lodge on the C&O Canal 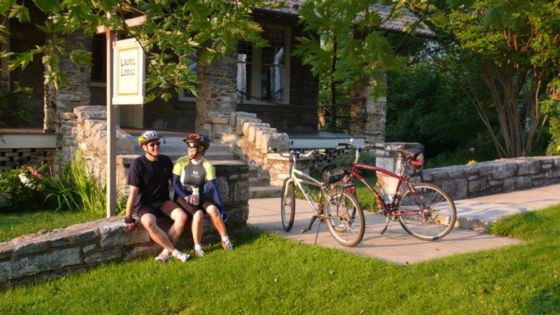 The scenic Chesapeake and Ohio Canal National Historical Park runs 184 miles along the Potomac River, starting in Washington, DC, and ending in Cumberland, Maryland. The Canal became a National Park in 1971, and last October it was designated as U.S. Bicycle Route (USBR) 50 which will eventually connect DC to San Francisco.

The C&O Canal National Historic Park is the ninth most visited National Park in the U.S. with over 4 million visitors each year. The Canal’s towpath is a perfect tour for beginners — traffic free, flat, and easy to navigate. It is a scenic, well-shaded ride running through friendly and charming little towns that welcome cyclists. There are frequent campgrounds along the way and riding the towpath offers spectacular views of the Potomac River. Chris Craig, owner of Laurel Lodge B&B, describes the Potomac as “a wide and beautiful river that can seem secluded and wild right up into the nation’s capital.” It is home to all kinds of wildlife including herons, wild turkeys, deer, snakes, and turtles. And the route ends in DC, the bike-friendly capital of our nation — a beacon awaiting cyclists at the end of their ride.

Adventure Cycling’s Tours Director, Arlen Hall, was hooked after his first ride on the C&O and has now visited a total of 10 times. He describes it as “the best trail ride in the country,” citing the charming towns along the way and the complete lack of cars. 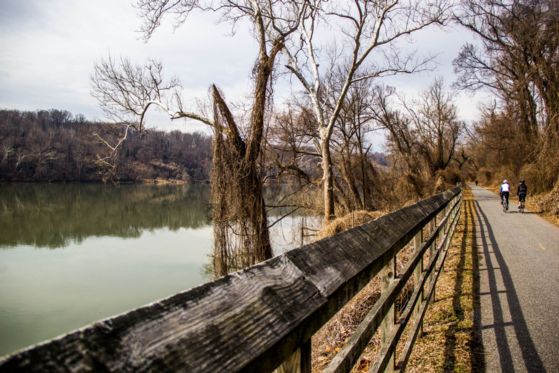 Cyclists ride the C&O along the Potomac River in DC 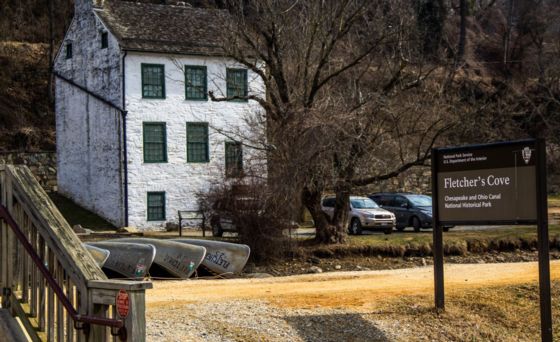 A historic lockhouse at Fletcher's Cove in DC

The canal is also rich in history—“not only the Canal’s story itself, which is interesting, but also the stories of George Washington, the Civil War, and the railroad that happened in close proximity,” Craig says. The C&O Canal was used to transport coal, lumber, and agricultural products down the river for close to 100 years and was important to the economic stability of communities along the canal. Interpretative signs along the towpath tell the story of how the canal was constructed, the technology that was used, the transport of commerce in the early 19th century, and how the locks, lock houses, and the lives of the canal workers were intertwined. The canal stopped operating in 1924 and became a National Park almost 50 years later to preserve its history, scenic and recreational features, and wildlife. 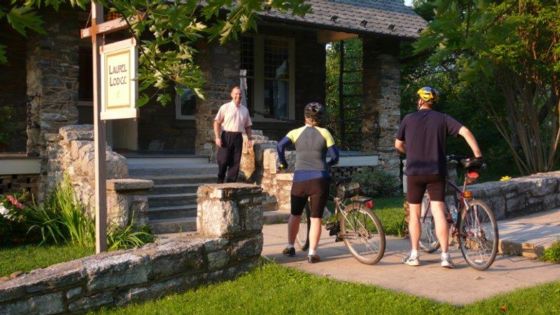 Laurel Lodge welcomes cyclists on the C&O in Harper's Ferry

The inclusion of this historic trail in the U.S. Bicycle Route System has opened up new possibilities not only for cyclists but also for businesses along the route. For many stops along the canal, including hotels, B&Bs, and shops, cyclists account for a quarter or more of their business during the warmer months. Craig describes the benefits of hosting bicycle tourists at Laurel Lodge: “Although the long-distance bike tourists tend to arrive tired after long travel days and a big climb up the hill to reach our house, they are enjoyable to visit with and interested in the town and the house. They don’t need parking, and they arrive in a non-polluting manner.”

The designation of U.S. Bike Route 50 will help promote the canal area as a tourist destination and attract cyclists, especially international cyclists and experienced long-distance bike travelers. Lois Turco is the Chair of the Canal Towns Partnership, a community and economic development project that highlights recreational tourism along the C&O Canal Towpath as a means to bring visitors and residents to eight towns along the canal and support local businesses. “The towpath connects the C&O National Park to the canal towns, and the canal towns connect to rail trails and town trails. We hope that as U.S. Bike Route 50 is marketed, our visitors will learn about all of the hospitality that awaits them in the canal towns,” she said. There is a strong sense of community surrounding the canal, including the Towpath Forever Initiative, which raises money to maintain the integrity and continuity of the C&O Canal/USBR 50.

Adventure Cycling worked in partnership with the Maryland Department of Transportation, National Park Service, Canal Towns Partnership, and American Association of State Highway and Transportation Officials (AASHTO) to designate USBR 50 on the C&O Canal through Maryland. The District of Columbia DOT submitted an application to AASHTO for numbering of USBR 50 this spring, and we are excited to find out if the route is approved at the end of the month.

Adventure Cycling is thrilled to be a partner in the development and promotion of the USBRS, helping to grow bicycle tourism and introduce beloved local trails such as the C&O Canal to cyclists from around the world.

Those wishing to help us care for the national treasure that is the C&O Canal Towpath are urged to contact the C&O Canal Trust at www.canaltrust.org and make a tax-deductible donation today!

I'll offer thumbs up for Laurel Lodge. My muddy bike and I arrived on their doorstep and no one batted an eye as I requested a hose and promptly washed my loaded panniers and bike off. In fact, I believe there was relief as it is quite a beautiful B&B.