A Closer Look at USBR 45: The Mississippi National River and Recreation Area

“The USBRS will be another opportunity for all our bike-friendly communities to promote bicycle tourism and transit in the park and metro area.” 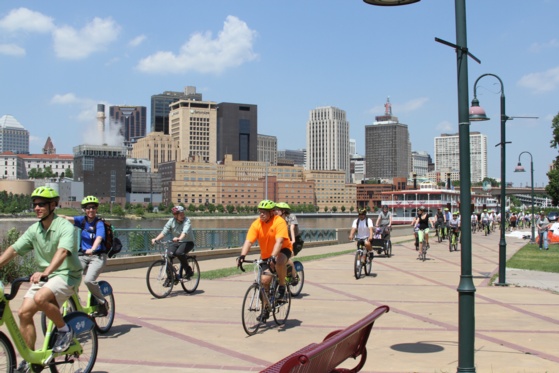 The Mississippi National River and Recreation Area (MNRRA) is a thriving urban National Park that integrates 72 miles of the Mississippi River through the heart of the Twin Cities in Minnesota. MNRRA joined the U.S. Bicycle Route System last year when AASHTO designated the Mississippi River Trail as U.S. Bicycle Route 45. The park was established in 1988 and is a partnership between the National Park Service, 25 local communities, 5 counties and over 90 entities that work together to manage, protect and enhance the park.

MNRRA’s 72-mile section of the Mississippi River Trail/USBR 45 takes cyclists along both sides of the river through the urban landscape of the Twin Cities as well as diverse ecological landscapes including prairie, oak savanna, and floodplain forest. The Mississippi River Trail provides a riding experience through the park that can either be leisurely day/overnight rides or longer multi-day trips, with many options for side trips. Cyclists can also take part in many other recreational activities such as bird watching, hiking, canoeing, and fishing. MNRRA does not offer camping, but there are nearby local and state campgrounds for planning overnight trips.

Susan Overson is a landscape architect and park planner for MNRRA who was involved in the designation of the park as USBR 45. “The USBR 45 designation provides a means for long-distance cyclists coming from the headwaters of the Mississippi River on their way to the Gulf of Mexico to experience the most scenic, bicycle-friendly route through the Twin Cities metro area,” Overson said. “And because MNRRA is an urban park, local cyclists and families have immediate access to safe cycling trails in their backyard.” USBR 45 will eventually be designated along the entire length of the Mississippi River Trail from Minnesota to Louisiana.

A Ride through History

Minneapolis was once the flour-milling capital of the world, and many of the buildings from that era are now National Historic Landmarks. The area around St Anthony Falls was established as the St. Anthony Falls Historic District in 1971 and the falls were considered sacred to many Native American tribes in the area. Overson described the historic appeal for cyclists: “The rich history and many quaint river towns have shaped the development of this area and provide a distinctive biking experience that is historic, urban, natural and very bike friendly.”

Promoting Cycling — Above and Beyond

MNRRA is one of the first national parks to develop a bike-share system, and has worked very closely with Nice Ride Minnesota to install over 60 stations along the river connecting many destinations in Minneapolis and St. Paul.

“We like to think of ourselves as the most bicycle-friendly national park in the system,” said Overson. The bike-share system is part of their Alternative Transportation Plan, enabling visitors to enjoy a multimodal recreational and commuter experience along the river. MNRRA's goal is to provide a continuous trail, open space, and alternative transportation along the river to increase non-motorized access, reduce congestion, and protect the park’s abundant natural resources. In addition to bike share, it includes bike trails, a light rail, bus, high-speed rail, and water (canoe) access.

The League of American Bicyclists recently announced that Minnesota ranks as the second most bicycle-friendly state in the nation in 2014, and it has ranked in the top five since 2008. MNRRA received the 2013 St Paul Commuter Choice Award for its efforts to encourage bicycle commuting through the Alternative Transportation Plan.

Just got a new ICE and looking for bike rides!