Adventure Cycling Association's 3rd Annual Bicycle Travel Photo Contest has been, hands down, my favorite computer adventure here so far. Receiving multiple photos a day, I drooled over adventure cyclists' travels all over the world. For a few minutes every day, I was transported to vivid landscapes and made to envision the moment of a world on two wheels that each image captured.

Those who contributed to the 500+ entries could not have made it harder on us judges. We debated for over an hour and a half, flipping photographs back and forth on the projector, but no gloves came off. In the end, the votes were pretty unanimous.

If you have been lucky enough to receive the February issue of Adventure Cyclist, you have, no doubt, ogled over the winning photos featured in our four page spread. But, without further ado, it is time for those two-wheeled adventures' online debut...

Adam Coppola's shot of Haystack Rock at Cannon Beach, Oregon glows right off the page. A low tide and a glorious sunset came together for the judges' favorite shot. Along with being featured in Adventure Cyclist, Adam will receive a two-year membership with Adventure Cycling and a $100 gift certificate to our Cyclosource store. 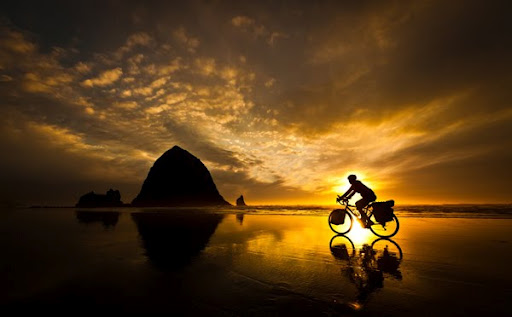 Our Second Place shot was taken by Ryan Davies. The caption submitted really struck a cord with all of the judges:

"We cycled across Turkmenistan using a standard 5-day transit visa. The 500 km between the Iranian and Uzbek borders is usually simple enough, but unfortunately our 5 days coincided with 5 days of the strongest headwind I’ve ever experienced. We were reduced to a soul-destroying 6 mph average speed, and had to spend every daylight hour on the bikes. The road stretched to the horizon under grey skies, surrounded by vast, empty landscapes." 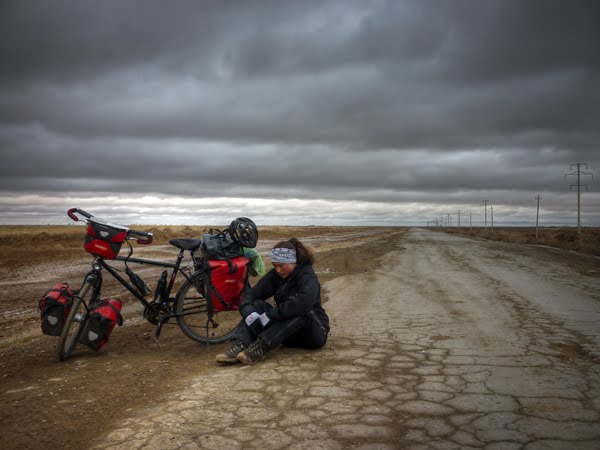 Third Place went to our top winner, Adam Coppola, again! Adam and his wife, Christy, cycled the 50 states of America for their charity organization: Give a Bike.

“Corn, soybean, more corn, more soybean, even more corn, and tons more soybean. Iowa could be a mind dream or mind nightmare at any given moment. No other place in the country allows a cyclist to get into a euphoric multiple-hour, rhythmic, meditative ride as our nation’s corn belt. This same region can turn into a battle against headwinds with no end in sight — tougher than any Rocky Mountain climb.” 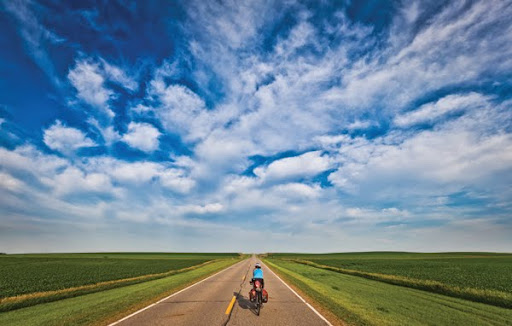 Jukka Salminen — An acacia tree offers a rare patch of midday shade to a father and son on tour in Sudan’s Nubian Desert. 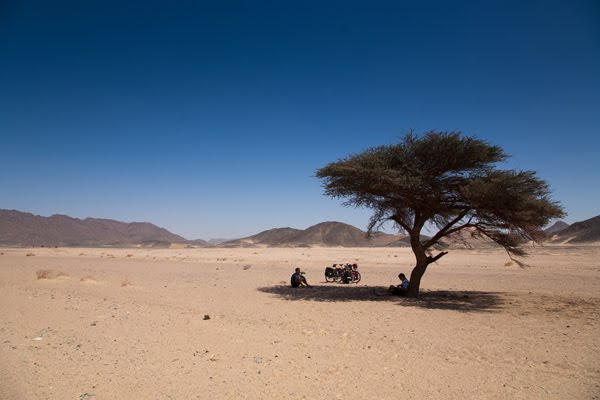 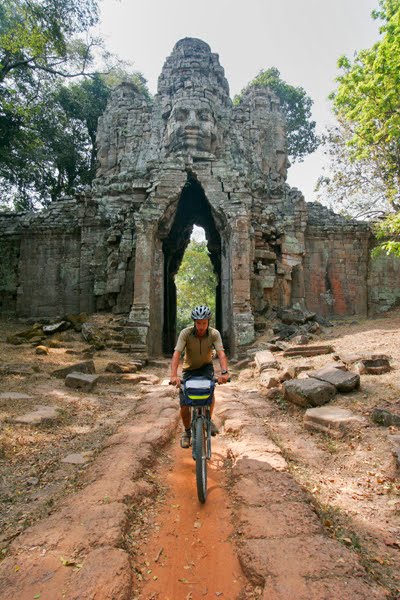 Brian Wasson — Six-year-old Matt Wasson pauses on the historic Keystone Viaduct bridge in western Pennsylvania during a three-day tour on the Great Allegheny Passage. He did the 100-mile tour with his mom and dad on their triplet. It was his first overnight bike tour.

(Note: This photo, and especially his attitude, had us in stitches!) 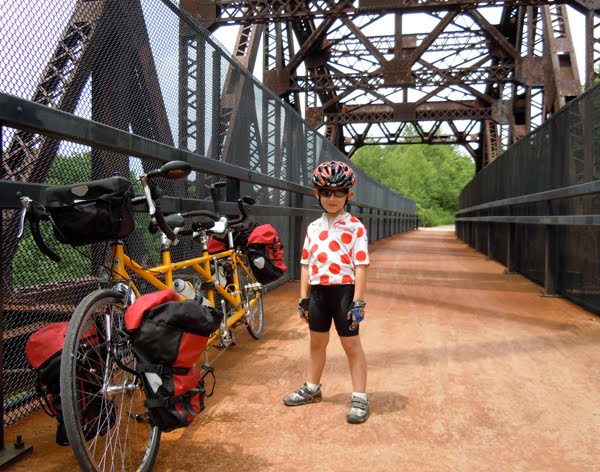 “The locals call this road in the Kaisut Desert of northern Kenya the ‘Highway to Hell.’ The roads here were the worst of all, corrugated with big lava rocks. This area was the most dangerous I had to travel through. It’s a region of tribal warriors, nomads, and the notorious ‘Shifta’ — local bandits.”

“I crossed 10 different African countries entirely unassisted, covering 11,198 km in 70 days, 3 hours and 50 minutes (10 days faster than the previous record). With this attempt, I raised funds for safe water and sanitation facilities for schools in Nyanja, Zambia.” 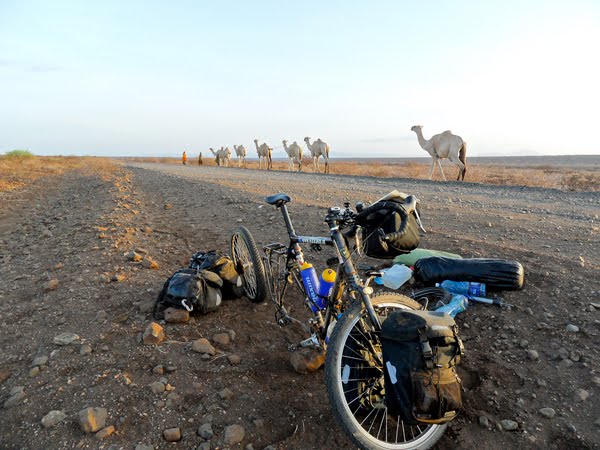 Melisa Regan — “After a stop in Pienza in Tuscany during our tour in Italy, we veered off of the paved road onto an unmarked dirt road that, according to our GPS, led to the agritourism campground on our map. After a couple of miles of uncertainty, we arrived at the campground and the most beautiful view we had seen in our three weeks of touring.” 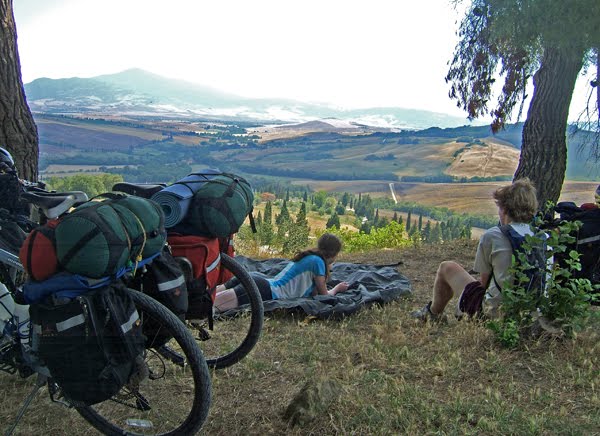 Nick Jensen — Carrie Jensen pedals away from Lake Wakatipu on her way from Queenstown to Glenorchy in New Zealand. Carrie and her husband Nick spent three months exploring New Zealand by bicycle for their honeymoon. 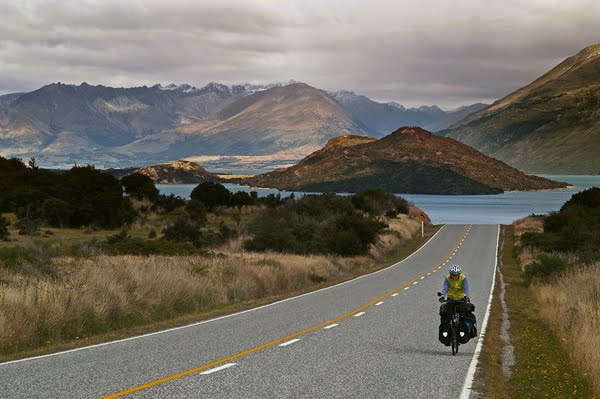 Tobias Pieper — This moment on the road in northern Laos was captured during a 30-country, 28,000-mile tour.

“Our trip was a dream, a crazy idea. But in march 2009, it became reality when we left our home country, Germany, to cycle east. Our destination was Beijing, China. Even we doubted in the beginning that we could reach Asia at all. But it turned out to become the adventure of a lifetime.” 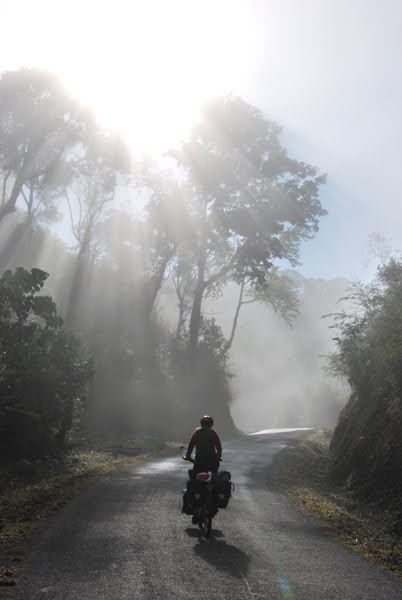 Thanks so much to all who contributed! I hope your adventures continue to be beautiful and that you have your trusty camera with you to capture and share them with the rest of us ... maybe via the 4th Annual Bicycle Travel Photo Contest!

RACHEL STEVENS is a graphic designer for Adventure Cycling Association.

Nice picture, thanks for sharing

Please do, Jolene!We feel so lucky to have such amazing photographers contribute to our contest.

Wow! Totally agree on #1. Not biased because I live in OR either...great shot. I will def get some shots in for next yrs contest!

What a great set of pictures. Hats off to them all!