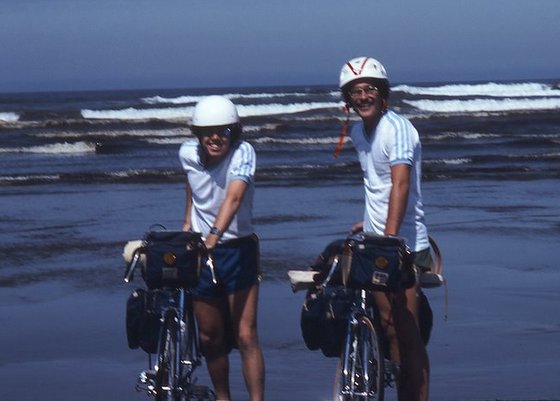 Thirty years ago (tomorrow). I left Seaside, Oregon with my buddy Thomas to cycle across America. July 2, 1981. Almost 11,000 days have passed since we dipped our rear tires in the Pacific Ocean. Hard to believe. In some ways it really does feel like it was yesterday.

In this photo we are wearing gym shorts, cotton t-shirts, and no sun screen.

The shirts are matching. On the back is printed, "East Coast or Bust!" Our friend had them printed up for us. But due to an unfortunate choice of font, they read to most people as "Easy Coasy or Busy!"

We had meant to train ... but didn't. We had an extremely limited budget. I had a total of $400, most of which I'd attained by selling my '64 Pontiac Tempest. We had purchased these incredibly cheap tires and learned that "you get what you pay for" when they wore out within the first five hundred miles.

In our panniers were cotton sweats, cotton sweatshirts, cotton socks, and no rain gear. We had the first set of maps (that's all we could afford) from Bikecentennial (now the Adventure Cycling Association).

Many people would say we were ill-prepared, and they'd be right. Perhaps we should have postponed our trip. Waited until we got our gear and plans and routes just right. But then maybe that delay would have led to more delay and changes of life and finally apathy toward the dream trip.

But we did. I did. And I have been forever grateful for it.

Happy Anniversary to everyone who has ever begun a trip of a lifetime.