On the weekend of September 25 – 27, I drove to Sharonville, OH for the 2015 Recumbent Cycle-Con Trade Show & Convention, "The Largest Recumbent Cycling Event in the World!"

Friday opened with a “Trade Only” day. Exhibitors offered dealers and distributors the opportunity to learn about their companies, test ride their machines, and find out about new models about to be released for 2016.

What I found most interesting, besides the incredible number of recumbent bikes and trikes, was the enthusiasm and genuine interest of those showing off bikes and those looking at and test riding them.

I also noticed a camaraderie among the manufacturers without that bitter tasting, “I won’t let you in on my secrets,” kind of attitude prevalent at Interbike. Everyone was having fun!

Saturday and Sunday opened to the general public and people showed up in droves; many wearing cycling clothes and carrying their helmets — they were ready to ride!

While small in size compared to other bicycle expos, Recumbent Cycle-Con was packed with rideables and you could don a helmet and ride/glide out the back door onto a very smartly cordoned track for a REAL test ride. The smooth, curvy track had a bit of a rise and downhill, and was safely controlled. There were probably in excess of 500 people who signed up to test ride bikes just on Saturday alone.

Trikes are by far leading the way — taking over from the two-wheeled varieties in the past couple of seasons — and FAT trikes are the big trend right now. The one you couldn’t miss if you tried was the fat tire trike from Azub from the Czech Republic. Meant to ride on ice and snow, it was like a bright orange John Deere tractor with knobby tires and EVERYONE wanted to ride it!

Greenspeed, long known for their lightweight and now aerodynamic machines, came in from Australia. Greenspeed’s CEO, Ian Sims received the Industry Recognition Award at the banquet on Friday night.

Probably one of the most talked about companies was Cruzbike. Offering what they term a “dynamic boom front wheel drive” system, people came from far and wide to test ride one or more of their models because they are known to be fast and the two wheel versions tend to feel a lot like an upright when climbing. 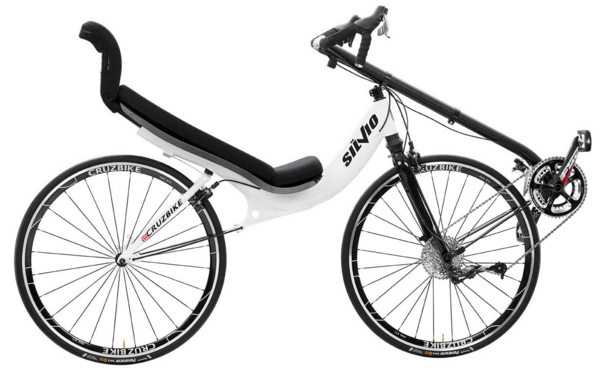 Cruzbike has developed a “leaning” trike conversion kit that will retrofit to almost any existing CruzBike and turn it into a leaning delta FWD trike. That kit is in prototype form only.

What I found satisfying about this company? CEO Maria Parker — a world record holding cyclist — was on the floor and on her feet from start to finish each day talking with everyone who stopped by her booth, always with a smile and loads of enthusiasm.

For a great wrap-up of more companies and models, go to BentRiderOnline.com, a one-stop place for recumbent information, edited by a great guy named Bryan Ball, who wrote, How Recumbents are Exactly Like Beer — which I am about to read!

All in all, Recumbent Cycle-Con and the Bicycle Touring & Travel Expo were worth the trip.

Guest blog by Diane B. Lees.