1001 Stories About Water, An Interview with Devi Lockwood

For over a year, storyteller, poet, and cyclist Devi Lockwood has been traveling the world by boat and bike to collect 1,001 stories about water.

I’d heard about Devi’s journey shortly after returning from a send-off ride for another group of storytellers on a pilgrimage to the Tar Sands in Alberta. It was interesting to meet so many storytellers using bicycle travel as a platform for engaging with communities around issues of climate change — a natural fit really. What better way to learn about global issues than to talk directly with those affected and hear their personal stories and experiences?

In her recent article from Harvard Magazine, Devi wrote about the relationship between story and place:

“As a student of Folklore & Mythology, I learned how to listen more closely and how to tell stories in a way that engages the listener. I learned that, as folklorist Keith Basso explains, ‘Wisdom sits in places.’”

Where did you go on you first bicycle tour and how did you prepare for it?
My very first tour was a three-day ride with my mom from Boston to Connecticut to trial the gear. After that I solo toured for a month down the Mississippi River from Memphis, Tennessee to Venice, Louisiana. I didn’t do anything special to prepare for it — everything I learned about touring happened on the go.

How did you come to utilize bicycle touring as a platform for your work as a writer and storyteller?
I tore my ACL playing pick-up soccer in summer 2013 and had to have reconstructive surgery. During the recovery process, cycling was the first thing I could do again that made me feel free. There were months and months where, while healing, my body felt like something other than my own. I went from using my bicycle to get around campus to actively falling in love with the movement. The idea for a bike trip came out of that time. 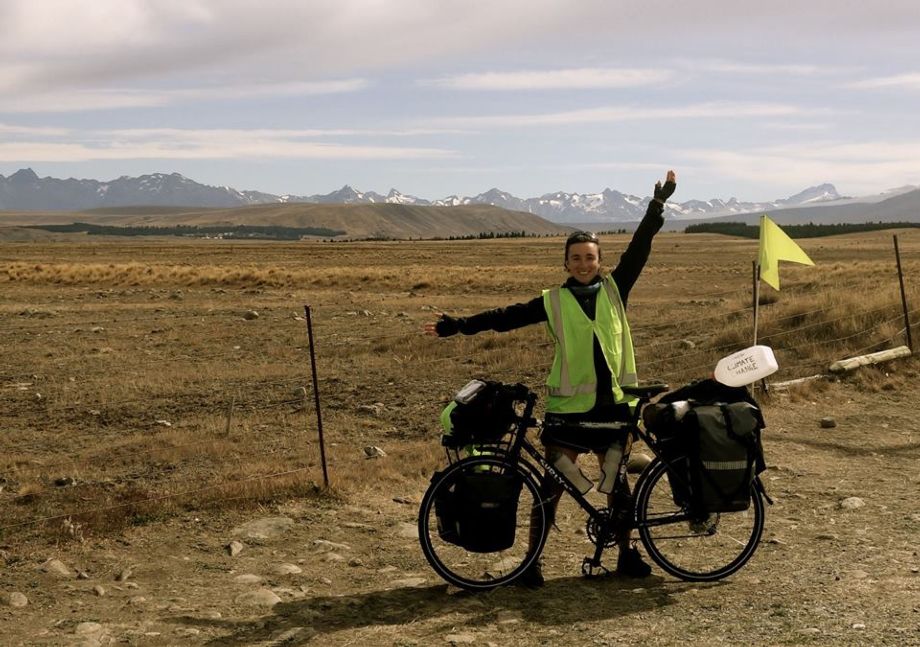 What inspired your 1001 Stories About Water tour?
In August 2013, I cycled the southern portion of the Mississippi River Trail and collected stories from people I met along the way. The farther down the river I cycled, the more stories people told me about water and climate change. For my senior thesis in Folklore & Mythology at Harvard, I wrote poems inspired by the stories people told me along the way. That journey inspired my current trip.

In what ways has bicycle travel influenced your work as a writer?
It is the rhythm of how I move. I have fallen in love with slow motion.

Where are you now and where are you headed next?
I’m volunteering at a sustainability conference in Upper Hutt, New Zealand. I’m not sure where I’m headed next — possibly to Indonesia or South America. It depends on where I can get by boat. I stopped flying to reduce my environmental footprint.

You can listen to several interviews with Devi on her website, and I highly recommend it.

ON THE ROAD is written by the tours team — Whitney, Mandy, Linda, Emma and Arlen — tours specialists and intrepid bicyclists, helping you bring your cycling dreams to fruition. Check out our 2016 Guided Tours today!