10 Indicators that Bicycle Travel and Tourism are Booming and Changing

From Asia to Europe to America, bicycle travel of all kinds is becoming more popular 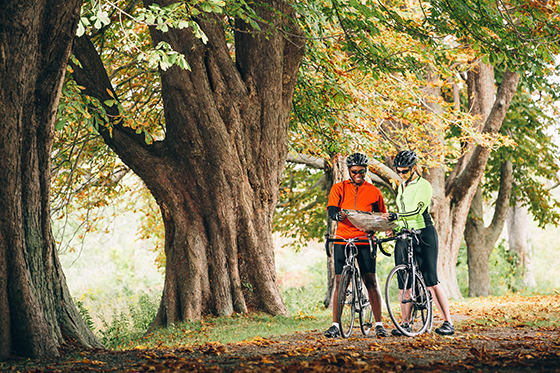 As 2014 winds down, bicycle tourism and travel continue to zoom upward – and around the planet. In its third biennial survey, Adventure Cycling Association has found that the bicycle tourism sector in the U.S., and globally, is becoming more prominent, more lucrative, and is changing to meet consumer demands. Demand for bicycle tour opportunities is also prompting new and expanded bike route networks and facility improvements at the regional and national levels. Here are ten indicators of how bike travel and tourism are prospering and changing.

1. Bike tourism seen as emerging sector in global and American travel markets: This October saw the release of the first-ever global survey of nearly 200 bike tour operators. Conducted by the Adventure Travel Trade Association (ATTA), the report demonstrated that the sector is becoming more organized and prominent in global travel. Also this year, bike tourism was featured for the first time along with other adventure tourism options at the largest consumer travel show in North America, the New York Times (NYT) Travel Show. (Adventure and cycle tourism will again be featured in 2015 at the NYT Show from January 23-25.) Finally, the broader world of bike tourism – from multi-day events to day trips – is being represented at a major national conference (November 5-8 in San Diego) organized by the Bicycle Tour Network, whose members include a wide variety of major bike events and tour companies.

2. More states and regions reveal bike tourism’s economic potential: Since Europe’s pioneering 2012 study showing that bike tourism generates $57 billion in economic impacts annually, more regions and states have charted bike tourism’s impact. In the last two years, studies have been released in: Scotland, finding in 2013 that the value of cycle tourism is between £241 million and £362 million (or $385.6 million and $579.2 million); Oregon, where a 2012 review found bike tourism’s impact to be $400 million; Michigan, where the first phase of a 2014 study showed $668 million annually in economic benefits to Michigan's economy from employment, retail revenue, tourism expenditure, and increased health and productivity – the next phase will drill deeper into the impacts of bike tourism and events; Arizona, where a 2013 study showed $88 million in bike tourism-related expenditures from out-of-state visitors; and Montana, where a 2013 study showed that bike tourists spend about $75 a day, compared to the average tourist’s $58 per day; the study’s authors also noted the potential for multi-day bike tourism in the state to bring in $377 million.

3. Continental and national bike route networks are growing: Major bike networks have been adding new segments and new miles, especially in the U.S. and Europe. The United Kingdom’s National Cycle Network grew to more than 14,000 miles and saw user trips grow by 7% in 2013. The extensive Euro-Velo long-distance cycle network has plans to add an entirely new route on the Rhone River and extensions of three other routes. The fast-growing U.S. Bicycle Route System now encompasses 6,790 miles in 15 states, with new routes up for approval this month in Florida, Maryland, Massachusetts, and Michigan. More than 40 states are planning, implementing and promoting U.S. Bicycle Routes.

4. Countries and regions are developing regional bike networks: A theme at this year’s international Velo-city Conference in Adelaide, Australia was the development of moderate distance bike route networks tied to a region’s scenic, cultural, and historic assets. This trend is definitely apparent in Asia, with South Korea building a series of off-road paved paths for cycle touring. In Nara, Japan, there is an ambitious project under way to create a 360-mile (600 km) bicycle network connecting Nara and Kyoto and the surrounding countryside, complete with bike hospitality and support centers. In northern Taiwan, there is an exploratory effort by council governments to create a 372-mile (618 km) bike tourism network. In the U.S. in 2014, one of the most popular new regional networks to appear was the Idaho Hot Springs Mountain Bike Route in central Idaho. Map sets for the 500-mile gravel road loop (with single track offshoots) have been selling rapidly, and are now in their third printing. This route is part of a budding trend toward bike tours on gravel road networks in the Midwest and West. At the state level, Oregon continues its trend-setting ways with the addition of new scenic bikeways – there are now 12 bikeways across the state, ranging in distance from 24 to 173 miles.

5. Single-day and short tours proliferate: Over the last few years, there has been a boom in companies offering short tours in cities around the U.S. They range from Gotham Bike Tours in Manhattan to Green Fleet Bicycle Tours in Nashville to Bicycle Tours of Atlanta. In fact, a new organization, the Bicycle Tour Alliance, representing these companies has emerged; members will be meeting in January 2015 in Nashville to share best practices for day trips. Some of these companies are now offering bike overnights (one- and two-night tours). Gotham is running “multi-modal” overnight tours that utilize bikes and New York City’s transit system.

6. Self-guided tours become more popular: Commercial bike tours offered by North American companies have typically been guided group tours. European bike tour companies, however, have long offered self-guided tours as a popular and less expensive option, where the company books the lodging, transports luggage, plans the route, and provides maps and route information, and people can ride the tour on their own. Jim Johnson, president of BikeToursDirect, which represents local bike tour companies worldwide, is seeing U.S. companies increasingly shift toward this more independent and affordable option. “What's gratifying is that, in the decade we've been promoting the self-guided model, we've seen larger North American companies increasingly add self-guided tours to their product lines,” he says. “It really makes bike touring accessible and affordable to a lot more people.” Smaller American companies are also beginning to offer self-guided tours; for example, Bike the GAP is offering 4-day and 7-day tours along what is rapidly becoming a premier bike touring destination: the Great Allegheny Passage rail-trail and the C&O Canal Towpath, a 330-mile off-road trail system between Washington, DC, and Pittsburgh, PA.

7. Federal and state agencies boost support for bike travel: At the end of 2013, Amtrak formed its first-ever bicycle task force to improve “roll-on, roll-off” service for traveling cyclists. The task force is selecting two pilot routes (long and short) to provide this kind of service, which is more common in Europe. The National Park Service signed a memorandum of understanding with Adventure Cycling Association to promote more bike travel to and through the parks – for example, the Natchez Trace Parkway is conducting outreach and installing signage and safety markings to enhance the parkway’s reputation as a cycling destination. At the state level, in 2013, Massachusetts State Parks became the seventh state park system to adopt a best practice “no turn-away” directive for traveling cyclists, ensuring that self-supported traveling cyclists always have a place to stay at state parks, even when a campground is technically full.

8. Bike shares and bike rentals support bike tourism: One of the hot new trends in cycling is the rise of “bike share” systems which enable users to pick up a bike at one docking station and ride it over a short distance to another docking station. Tourists are increasingly using these convenient, inexpensive systems to sightsee and run errands; in larger systems such as Washington, DC’s Capital Bike Share, tourists make up as much as 20% of all rides.

9. North America events thrive, expand: A mainstay of the bike tourism sector is the array of large multi-day bike events, including classic events like Cycle Oregon, Bicycle Ride Across Georgia, Ride the Rockies in Colorado, The Grand Tour in Quebec and New England, and RAGBRAI in Iowa, new events like Cycle Greater Yellowstone in Wyoming and Montana, and the popular Tour de Cure and Bike MS series of events. These rides continue to attract hundreds of thousands of participants, many of them on their first multi-day bike ride, and generate hundreds of millions of dollars in economic impact and charitable contributions. RAGBRAI alone generates at least $24 million in direct spending at the local level.

10. Tourism-related cycling non-profits reach new heights: Non-profits associated with bike tourism are experiencing substantial growth, including the International Mountain Bike Association (IMBA), which is developing a database and map of mountain bike destinations and supporting businesses; Velo Quebec, which works with government agencies in Quebec Province to maintain and grow La Route Verte, the premier regional bike network in North America, as well as their bike-hospitality network, Bienvenue ciclistes; the European Cyclists Federation, which is coordinating efforts to create the EuroVelo continental bike route network; and Adventure Cycling Association, which coordinates work on the U.S. Bicycle Route System. At the close of Adventure Cycling’s most recent fiscal year on September 30, the organization set new records for memberships, bike map units sold, tour participants, donations and advertising revenue – records which the organization attributes to the growing surge of interest in bike travel.

The timing of this article in impeccable! Just yesterday, I wrote to our newly-elected county executive with this paragraph:

"2. Bicycle lanes/trails. Have you ever looked at the bicycling feature on Google maps? Frederick County is sorely lacking in bicycle trails and lanes! The new bicycle lanes on Rt. 26 around Monocacy Blvd are a joke! Based on my own personal observations and experiences, communities that cater to cyclists tend to have thriving local economies (look at Ohiopyle, PA - a town of only 59). They could also go hand in hand with rural preservation. Frederick County has so much beauty and history - let's make it accessible to everyone, not just motorists!"