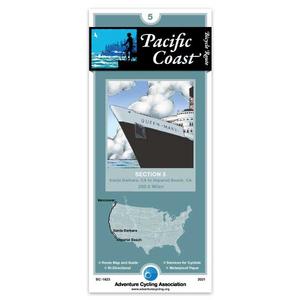 Because the heavy traffic tends to be even heavier in summer, we recommend that you ride this route in the spring or autumn. May and September-October are the best months for riding. Note that during summer, strong winds prevail from north to south. In Santa Barbara and the towns surrounding it, prepare for urban riding conditions. US 101 between Santa Barbara and Ventura is closed to bicyclists, so you'll ride on city streets and county roads. The route stays close to sea level here. Traffic levels build near Ventura and Oxnard, then taper off until Los Angeles County. You'll ride on a bike path through Emma Wood State Beach north of Ventura, and join SR 1 southeast of Port Hueneme. South of the Ventura/Los Angeles County line you'll ride through Malibu on a four-and six lane freeway with wide shoulders. Traffic is heavier on weekends and during the summer. Through Los Angeles you'll be using beachside bicycle and pedestrian paths. You'll follow city streets through Palos Verdes Estates and Long Beach, then rejoin the busy Pacific Coast Highway, which has shoulders. You'll encounter busy local traffic on CR S21 in San Diego County; the road shoulders are continuous. South of La Jolla, you'll pedal along residential streets and bicycle/pedestrian paths through San Diego. A ferry takes you to Coronado and a path along Silver Strand Beach. The route ends at the Border Field State Park south of Imperial Beach, where the U.S.A and Mexico share the border at the Pacific Ocean.