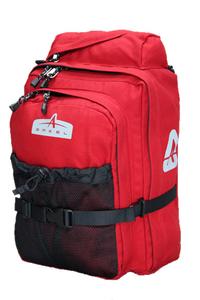 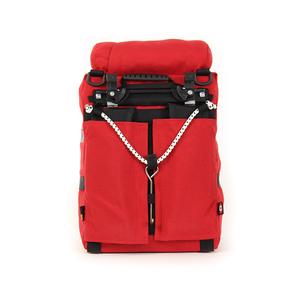 Designed as front panniers to compliment the GT-54s, the GT-18s exemplify Arkel's commitment to quality and functionality. The rectangular shape offers the most versatility in terms of capacity. The exterior mesh pocket is great for stashing that rain jacket after a summer shower, and if you are just going across town instead of across the continent, you can also use the GT-18s as rear panniers. The GT-18s come with a fully waterproof integrated liner bag inside the main compartment. Sold as a pair. 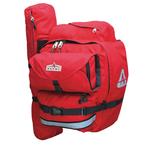 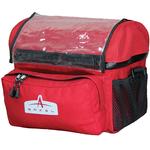 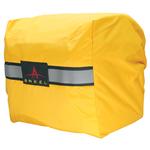 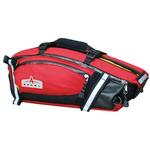 If you are using this fine bag with the Tubus Tara front rack you will need the hook loop which you can find with the rack. This should be noted in the description of the pannier!

I have Ortleib front panniers and also these Arkels. One thing the Ortleib panniers have that is not present in the Arkel bags is a plastic bumper at the bottom to protect the bags from damage from curbs, etc. Once on a tour I hit a high curb with the Ortleibs and it did no damage except scratch the plastic bumper. I am not sure what would have happened to the Arkels. Supposedly the fabric is tough, perhaps tough enough to take curbs. I would be more comfortable if the bags did come with a hard plastic bumper for scrapes.

In the end I thought this pannier was too busy, too many parts, too many compartments. The separate waterproofing was a good idea but then I prefer that the whole enclosure be waterproof. Whoever deigned it was thoughtful and it might be five stars to someone else. Finally I made a mistake thinking that this pair of smaller panniers would be sufficient for 4 day rides. I learned that you have to take about as much and the stuff that's bulky is the same for short or long.

Just came back from Red Rock Ramble using these bags as rear panniers. They have a lot of room, are rock solid on the rack, mount and dismount in seconds. The zippers wrap around like a suitcase so they are easy to pack and it is easy to find stuff. For me much better than stuffing everything in from the top. They have not been out in the rain yet so I don't know how that will work but they have an integrated dry bag inside the large compartment.

Best panniers I've used to date. Easy on and off and nice handles for carrying. Stays put even over big bumps. Works well on the rear rack. Had some concern over the price, but after using them, no regrets.

I have owned panniers from many different manufacturers over the years, and this is without a doubt the best, most well designed front pannier I have ever owned. My most recent previous set were Madden front and rear panniers. The Arkel panniers address all of the problems and design flaws that I recognized in the Madden panniers, as well as problems I didn't even realize I had until I got the Arkels. This bag feels quite spacious, and the straight rather than tapered sides makes it more versatile. With the removable frame taken out, I can easily fit my 15" widescreen laptop in the main compartment with plenty of room to spare. This bag is big enough to serve either as front panniers or modest sized rear panniers. The zippers on the main body and the large external pocket unzip completely on three sides, which make this bag a breeze to load and unload. This is a large improvement over my previous panniers, which were top loading with a drawstring and a flap that buckled over the top, which made it quite difficult to get things in and out of the bag, especially if something had fallen to the bottom. Unlike my previous panniers, there are no parts that can dangle and get trapped in the spokes. The horizontal compression strap is held up and out of the spokes even when it is unbuckled. My previous panniers had outside pockets with zippers on the bottom. I suppose this results in a somewhat more water resistant design, but I accidently spilled the contents of the pocket more than once when I forgot to re-zip the zipper before riding off. I really appreciate the design of the zipper on the top pocket of the Arkel panniers. It easily gives access to the contents of the pocket, with less danger of spilling the contents accidentally. This pocket is big enough to comfortably hold a SIGG .6 liter water bottle, or a random assortment of small odds and ends. The best feature of all is attachment mechanism. The hooks are infinitely adjustable side-to-side to fit just about any rack in existence. And the handle is attached to spring-loaded cams under the hooks. When you pull up on the handle, the cams release and the bag comes free of the rack. When re-attaching the bag to the rack, the cams stay open until you release the handle, then they snap back into place, securely locking the bag to the rack. I've never before had a pannier that was so easily adjustable, so securely attached, and so easy to attach and remove.

We decided to get the Arkel for our tandem because they were front loaders, and my husband didn't trust a completely water proof bag because of the bath tub effect. Lets face it, in a down poor, water will get in, and never get out! GT-18 for the front, and the G-54 for the rear, and the small handle bar bag. My only regret was we didn't get the GT-18BP, they work like a back pack when not on the bike. They were fabulous in every way. Easy to put on, and take off, kept out things very organised too. We got the rain covers as well, which I can attest to being rain proof! Our during our 71 day tour through Europe in September we had plenty of rain, wind, frost, and sun. They held up like champs, came home still looking new.