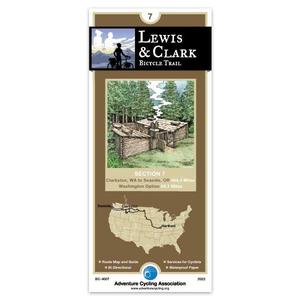 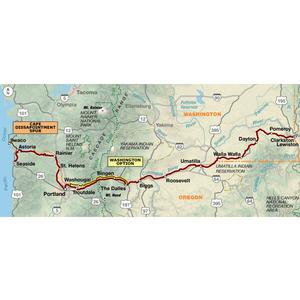 Section 7 of the Lewis & Clark Bicycle Trail begins in Clarkston, Washington and heads overland to the Pacific Ocean. When the route meets the Columbia River, winds can become fierce, blowing predominately from the west particularily in the area known as the Gorge. This map section, like others on this route, has options. You can ride along the Gorge in either Oregon or Washington. From Astoria, the 19.3-mile Cape Disappointment Spur crosses the Columbia into Washington and heads west to Cape Disappointment State Park.

Mr. James C. Becker, Vancouver, WA, has sponsored this section of the Lewis & Clark Bicycle Trail and major funding has been provided by REI.

I'am preparing myself to do the L&C route. Bought 2 maps, S6 + S7 , great maps. I already got enthousistic on forehand. Super details as well Wb+EB .

Yes you can go with Google, but don't. This map set will keep you out of the weeds and prevent backtracking. I'm buying new maps to replace my old ones. And I'll take Google along.

Incredibly inclusive. Great map for my trip this summer. Thanks for doing such great leg-work.

I’ve used several AC maps, Great Rivers, Texas Hill Country. This one, like Mississippi River maps has alternatives on both sides of river. My one complaint is that the pluses and minuses of the alternatives are not listed/discussed. I’d also like to put in a plug for the brand new (May 2019) Society Hotel AND Hostel in Bingen WA. The hostel portion reminded me of European hostels and at $37 for a bunk is just wonderful

Map had all the info I needed, plus a sheet of some corrections since the map had been printed. Only complaint is that Washington Highway 14 was a little sketchy the first few miles going east past Vancouver. Other than that a great route.

The map was not the first AACA map for me by crossing America. So I could handle wiothout problems. The last mile in Seaside, OR ist first coming to the beach walk and then to the statuate of Lewis and Clark. I would prefare the direkt way through Broadway - You will see coming near to the Pacifik. This is a great moment!

First ACA map I've actually used enroute. Excellent resource for planning overnight camping and food stops. Nicely done historical notes. The elevation graph is one of its most useful features, particularly where climbing is a serious factor...but the graph could use a bit of refinement as far as accuracy and consistency. The floating North orientation of each panel was the feature I liked least, given a lifetime of orienting maps to magnetic North...but I don't have any good alternatives to suggest for space saving. A lot of excellent work has been done on this L&C Section 7, lots of detail packed into a small space. I've purchased other ACA route maps, earlier versions, and the evolutionary improvements are clearly apparent. ACA maps are very modestly priced and definitely enhance the bicycle touring experience dramatically. I wouldn't hesitate to recommend to friends.

The map was indeed very helpful, but I found it to be of very little use. Stopping in small towns and talking with locals I found was the best source of information that a touring bicyclist could get, it also opened the door for dinner as well as homestead invitations. If you really want an adventure, and a chance to meet people I highly recommend not purchasing any route maps, its a little harder but well worth the excitement.