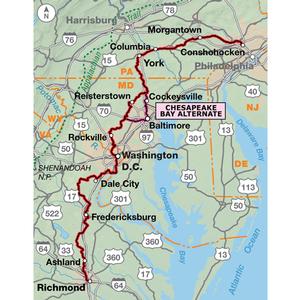 This map section uses multiple bike paths and has moderate to heavy amounts of traffic. In Conshohocken, you'll use the Schuylkill Trail along the Schuylkill River, and continue on a bike path through Valley Forge National Historic Park. The route goes through Lancaster County, which is home to many Amish families. The York County Heritage Trail begins in York, Pennsylvania which becomes Torrey C. Brown Trail in northern Maryland. Nearing Baltimore, two route options are available. The main route skirts the city to the west, using county roads that are often hilly. The Chesapeake Bay Alternate through Baltimore avoids most of the heavy traffic north of the city. In Maryland, the route uses the Rock Creek Trail, and entering Washington, D.C. the route switches to the Capital Crescent Trail. Between Dale City and Richmond, you'll be riding on busy well-signed and well-surfaced network of county roads. Shoulder widths on the roads are variable. The terrain is rolling, with a few steep hills. Click on enlargement for detail.