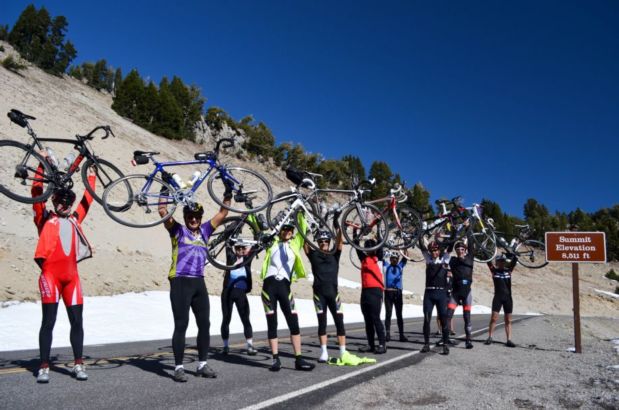 Each year, issues arise along the Adventure Cycling Route Network, U.S. Bicycle Route System, and other key routes for bicycle travel. We work with state and local departments of transportation, bicycle advocacy groups, congressional leaders, land use agencies such as the Forest Service, and industrial businesses such as the trucking industry to ensure that cyclists continue to have safe and legal use of these bicycle routes. These are some of our past advocacy wins as well as current issues that we are working to resolve.

Road Closure to Cyclists on Bicycle Route 66 in California

Due to deteriorating roadway conditions complicated by severe flooding, sections of Old Route 66, also known as the National Trails Highway (NTH), are impassable to both motorists and cyclists on a 100+ mile stretch in San Bernardino County, CA. With the help of the California Bicycle Advisory Committee, California Bicycle Coalition, and the California Association of Bicycle Organizations, we were able to work with the California Department of Transportation (Caltrans) to open sections of I-40 to cyclists, securing a legal and safe route through this area for Bicycle Route 66. Read our blog posts and action alerts about the issue for more information. We are also happy to report that the county, the Bureau of Land Management, and other partners are seeking grants for improving the NTH.

Periodically federal, state, and local governments propose bans that would inhibit bicycle travel. We work with our national, state, and local partners to educate officials on why these laws are bad for cyclists, tourism, and local economies. Some of these laws directly affect our routes, such as the Black Hawk ban which was overturned by the Colorado Supreme Court.

Mandatory sidepath laws require cyclists to use a sidepath when it is available, making it illegal to use the adjacent roadway. We are opposed to these restrictions since cyclists are legal road users. In addition, sidepaths can often restrict a cyclist from reaching their destination, are at times not maintained and can pose a safety risk if there are too many driveways and intersections.

In Montana, the U.S. Forest Service (USFS) permitted a mine near Butte, MT. After residents complained about potential noise, traffic, and dust on the dirt roads near their homes, the USFS considered an alternate route that will intersect the Continental Divide Trail and the Great Divide Mountain Bike Route. Mining trucks and heavy equipment will change the dynamic of the trail and the roads it follows. We requested the USFS to consider the impact of this decision on cyclists and hikers. A representative from the mining company met with us and will work to ensure cyclists safety and comfort during the 5-year mining operation.

Oil drilling and fracking extraction is booming in northwestern North Dakota and northeastern Montana, bringing an explosion in population and traffic. With no plans to increase road capacity in the areas by the state governments, a drastic route change was required for the Lewis and Clark Bicycle Trail and the Northern Tier Bicycle Route to ensure cyclists safety.

We opposed a project to ship "mega-load" oil production equipment from Lewiston, Idaho, along narrow, curvy state highways in Montana and Idaho to Alberta, Canada. The loads would have affected three Adventure Cycling routes: TransAmerica Trail, Lewis and Clark Bicycle Trail, and the Great Parks North Bicycle Route. We were concerned that these scenic roads would become large equipment and trucking corridors and that the construction of wide turn-outs and bridge structures would forever change the character of the roadways.

After release of the Sierra Cascades Route in 2010, we started to hear about issues from cyclists regarding California State Highway (SR) 89. With no shoulders along this stretch of highway and an abundance of logging trucks, we reached out to cyclists and looked at potential re-routes. With no feasible alternative route available (though a rail-trail is in the works), we engaged trucking companies with educational materials and a request to watch for cyclists and pass carefully. 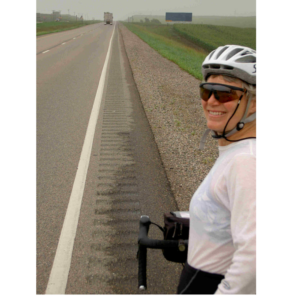 The Pacific Coast Bicycle Route is one of our most popular bicycle routes, however, cyclists safety is sometimes compromised by highway improvement projects. We've partnered with local and state advocacy groups to resolve issues related to rumble strips and large aggregate chip seal.

The Montana Department of Transportation (MDT) plans to install rumble strips on a 7-mile section of the TransAmerica Trail and a 21-mile section of the Northern Tier. The rumbles would be installed on 1-3 foot shoulders, which is below the national standard of a 4-foot minimum shoulder width for rumble strip placement. We have exchanged letters and met with MDT, and issued an action alert which prompted over 1,000 letters from concerned cyclists asking MDT to postpone the rumble strip projects. We continue to correspond with MDT and hope to move toward a resolution that will keep cyclists safe on Montana roads.

Bottom photo of rumble strips in Iowa by Doug Robin.