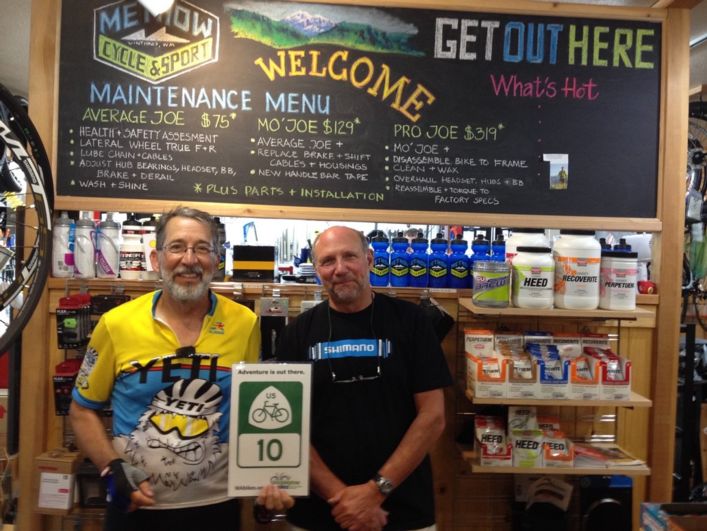 Bicycle tourism and trail tourism contribute significantly to local, state, and national economies, as well as internationally. Several states have commissioned studies and surveys of the economic benefits of bicycle and trail tourism, linked below. While the studies use different methodologies, they all demonstrate significant economic impacts that can be used to build support for bicycle tourism.

$214 Per Day Spending on La Route Verte Network in Québec

A 2014 study by UQAM’s Transat Chair in Tourism in Quebec Province shows cycle tourists spend an average $214 per day, 6% more than other types of tourists while cycling the La Route Verte network. Two-thirds of those surveyed plan to return for another trip. Read the summary on Velo Quebec's website where you can download the study highlights or (if you read French) download the full report. An older study found that La Route Verte cyclists spent a total of $95.4 million in 2000 and estimates brought the impact total to $134 by 2006, which corresponds to over $38 million in government revenues and helps support 2,861 jobs. Retombées économiques de la Route Verte. (March 2003. Read summary.)

$48 Billion Per Year from Cycle Tourism in Europe

The European Cyclists Federation coordinates the EuroVelo network which is signed, numbered, mapped, well-promoted and supported by numerous governments across the continent. This economic impact study conducted in 2012 was funded by the European Parliament and shows an impact of 44 billion euros (about $48 billion) from 2.3 billion bicycle tourism trips in Europe (pg 13).

In June 2013, ECF released another study: Calculating the Economic Benefits of Cycling in EU-27 (PDF) which takes into account everyday cycling and its health benefits. A 2016 update to the study, The EU Cycling Economy, concludes that bicycling in the EU contributes an economic benefit of €513 billion (US$544.6 billion), which is more than €1000 (US$1,060) per inhabitant.

A 2016 study found that around 1.3 million people used the Great Rides of Nga Haerenga, the New Zealand Cycle Trail in 2015, generating an estimated $37.4 million for local communities.

The Department for Transport in the United Kingdom has released a report that reviews the literature on the value of cycling, including evidence of the wider economic benefits of cycling as a mode of transportation. The study, The Value of Cycling: Rapid Evidence Review of the Economic Benefits of Cycling, found a number of conclusions, including: 1) bicycle tourists on average spend around 9% more per head per trip; 2) there is a greater propensity for cycle tourism where cycling mode share is higher; and 3) per capita spending on cycling equipment and maintenance is higher as cycling mode share increases.

The Outdoor Industry Association released a study in 2017, The Outdoor Recreation Economy, which found that bicycling participants spend $83 billion on 'trip-related' sales (bicycle tourism), and generate $97 billion in retail spending. Bicycle recreation spending also contributes to the creation of 848,000 jobs.

Additionally, the Bureau of Economic Analysis included outdoor recreation in its calculations of the U.S. GDP for the first time in 2018. They estimate the economic output of outdoor recreation to be $734 billion, surpassing industries such as agriculture, petroleum and coal, and computer and electronic products (Outdoor Recreation Roundtable). The BEA estimates bicycling contributes $96 billion in annual retail sales.

In June 2013, Arizona Department of Transportation released a report, An Economic Impact Study of Bicycling in Arizona: Out of State Bicycle Tourists and Exports (PDF), which focused on the impacts from out-of-state cyclists traveling to Arizona for events, guided tours, races, and training camps. The study documented $57 million in retail sales and 721 jobs created across the state.

$137 Million from Bicycling in Northwest Region

The Walton Family Foundation, in collaboration with PeopleForBikes, commissioned BBC Research & Consulting (BBC) to conduct a study, Economic and Health Benefits of Bicycling in Northwest Arkansas, released in March 2018. Key results from the study include:

A study published in October 2016, Economic and Health Benefits of Bicycling and Walking in Colorado, revealed that the overall health and economic benefits from bicycling contribute $1.6 billion to the state. Of that $1.6 billion, the study attributed $448 million to non-resident tourism spending, and $74 million to resident tourism spending, with an overall estimated bicycle tourism economic impact of $522 million. An older study from April 2000, Bicycling and Walking in Colorado: Economic Impact and Household Survey Results, found that bicycling contributed $1 billion to the state economy, and bicycle tourism and events contributed $250 - $300 million.

Between 2010-11, an economic impact survey (PDF) performed on three trails in Orange County Florida estimated 1.7 million people use the trails each year, providing $32.556 million in economic impact for the county’s economy.

$365 Million Per Year from Recreational Bicycling

$66.8 Million Per Year from Bicycle Tourism

Phase I: $668 Million from Bicycling Per Year

The Michigan Department of Transportation released Phase I of "Community and Economic Benefits of Bicycling in Michigan" in August 2014. The first study shows an estimated $668 million per year in economic benefits to Michigan's economy from employment, retail revenue, tourism expenditure, and increased health and productivity.

The Michigan Department of Transportation released Phase II of "Community and Economic Benefits of Bicycling in Michigan in May 2015. Phase II examines the economic impacts of bicycle touring and events and found that events bring the state $21.9 million from out-of-state visitors and touring cyclists spend an average of $71/day with the average trip length of 6 days.

Assessing the Economic Impact and Health Effects of Bicycling in Minnesota was published in 2016 by the University of Minnesota Tourism Center, and shows that bicycling contributed to $780 million in economic activity in 2014. Bicycling events produced a total of $14.3 million of economic activity in 2014. The economic impacts related to health show that bicycle commuting lowers medical costs and prevents 12 - 61 deaths per year, saving $100 million to $500 million.

An older study, the Economic Impact of Recreational Trail Use (PDF), was released in 2009 by the University of Minnesota Tourism Center and reported $427 million in spending from bicyclists using Minnesota trails and $2.4 billion in total spending statewide by all trail users.

In Bicycling In Minnesota by the Numbers, the Bicycle Alliance of Minnesota reported 5,000 jobs and $1 billion in revenue attributed to bicycling.

A 2012 study, Katy Trail Economic Impact Report, found that the 400,000 visitors to the Katy Trail State Park have an economic impact of $18,491,000 per year, which supports 367 jobs. About 85% of visitors bicycled the Katy Trail and 87% of respondents said the Katy Trail was the main reason for their visit to the area. One in five Katy Trail visitors stopped at a small town along the trail, contributing $8 million in total value added to the local community.

In 2013, the Institute for Tourism and Recreation Research (ITRR) conducted a study called Analysis of Touring Cyclists: Impacts, Needs and Opportunities for Montana, which found that multi-day cyclists spend $75 - $103 per day while in Montana and stay an average of eight or more nights. Touring cyclists hailed from 48 states and 18 countries.

The Montana Business Quarterly published a follow up article about this study called Bicycle Tourism: Providing Economic Development Opportunities for Montana, also written by the ITRR.

Prior to the 2013 study, the ITRR also compiled bike tourism data based on nonresident visitor surveys in 2012. Road and tour biking impact for Missoula County is estimated at $19.4 million or 8% of the county’s nonresident expenditures. Read ITRR analysis and summary, Cyclists spending per night, and Nonresident spending by cyclists.

This study, The Economic Impact of the Erie Canalway Trail (2012), was commissioned by Parks and Trails New York and found this 277-mile trail provides $253 million annually in sales, created 3,440 jobs, sees 1.6 million annual visits and overnight travelers spend a whopping $531.47 per visit.

Pathways to Prosperity: The Economic Impact of Investments in Bicycle Facilities (2004) is a case study of the northern Outer Banks, which found that 680,000 bicyclists (17% of all visitors) each year generate a $60 million impact in the region.

Evaluating the Economic Impact of Shared Use Paths in North Carolina (2018) was prepared by the Institute for Transportation Research and Education at North Carolina State University with Alta Planning and Design. The study looked at four greenways and found:

Travel Oregon commissioned a study, The Economic Significance of Bicycle-Related Travel in Oregon, Detailed State and Travel Region Estimates (2012) to look at the economic impact of bicycling across Oregon, including mountain biking, scenic bikeways and local bicycle amenities.

The Allegheny Trail Alliance has contracted trail user and business surveys to better understand the economic impacts that the Great Allegheny Passage (GAP) brings to the region. The 2015 survey reports almost one million trail users and found that 62% of trail users had an overnight stay with an overnight spending average of $124.58. Businesses experienced an increase in trail user traffic from 34% in 2013 to 41% in 2014. Forty percent of the businesses planned to expand and of those reported to expand 67% attributed their expansion to the impact from the trail.

A study published in March 2017 called Economic Benefits of Active Transportation shows that bicycle tourism in Utah generates over $121 million in economic output or total sales, 1,500 jobs, and $46 million in income earned. Overall, bicycling generates $425 million and creates 3,500 jobs. The study also looks at health impacts of bicycling, as well as case studies of two trails: the Murdoch Canal Trail and the Dead Horse Point trails.

The Economic Impact of Bicycling and Walking in Vermont report (2012) from Resource Systems Group and Local Motion shows that in 2009, biking and walking created at least 1,400 jobs, $41 million in personal income (wages) and $83 million in revenue. In addition, their research finds, the health and property value benefits could bump that up by more than $400 million in economic impact.

The Economic Impact of Bicycling in the Central Shenandoah Valley was released in August 2016. Bicycle tourism in the Central Shenandoah Valley region is estimated to have generated $8.6 million in sales activity in 2015. The total economic impact of bicycle tourism, including multiplier effects, is estimated to have been $13.6 million that supported 184 jobs in the region in 2015.

Bicycling provides a recreational use value of over $3 billion in Washington State, according to the January 2020 study, Economic, Environmental, & Social Benefits of Recreational Trails in Washington State (p 17). Nearly 1.5 million people use trails for bicycling, contributing to $44.3 million in savings to the economy. The total economic value of trails is over $8.2 billion.

A January 2015 study, Economic Analysis of Outdoor Recreation in Washington State, prepared byEarth Economics and commissioned by the Task Force on Parks and Outdoor Recreation, shows that recreational bicyclists (local and out-of-state) spend $3.1 billion per year statewide and bicycling is the third largest outdoor recreational activity in the state by total expenditures.

Valuing Bicycling’s Economic and Health Impacts in Wisconsin (2010) tracked health and economic benefits from bicycling at $1.9 billion annually with $924 million (and $533 million in direct impact) attributed to tourism and recreation and $410 million for health. The employment impact, as measured by full-time equivalent jobs, is 13,193.