What We Saw at CABDA

Now in its fourth year, the Chicago Area Bicycle Dealers Association’s annual trade show saw its largest turnout yet on Valentine’s Day. With over a hundred exhibitors spread over the massive Schaumburg Convention Center, CABDA is the fastest growing event of its kind in North America, and several companies debuted new models that should be of great interest to the discerning touring cyclist. 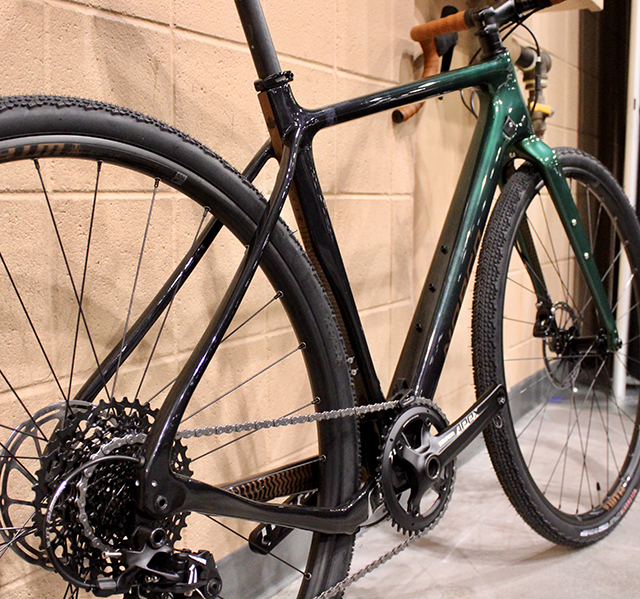 Rise of the Luxury Touring Bike

What’s an industry to do when it has decades of experience designing and producing strong, lightweight racing bicycles out of carbon fiber, but the public isn’t that interested in road racing? Make lightweight carbon touring bikes instead!

The Search XR from Norco takes the company’s extensive knowledge of endurance mountain biking and realizes it in a touring rig, complete with hidden dropper-post cable routing and clearance for either 700c x 40mm or 27.5 x 2.1in. tires. Designed specifically to fit Axiom front and rear racks, the Search XR features reinforced alloy mounts and multiple attachment points drilled directly into the dropout. There’s even some scalloping on the seatstays to allow a clip-on fender to attach to the frame instead of the seatpost, making it impossible for your buddies to knock it to the side when you aren’t looking.

Not fancy enough? Slap on a pair of Alto’s carbon clinchers. Claimed to be all but immune to delamination, Alto’s 32-spoke, two-cross-patterned gravel grinders are the only wheels in their class with no weight limit! The Alto rep said all their wheels are designed to outlast every other brand in their extreme torture test lab. Go ahead and load them up! Other features include a self-extracting bearing shield that allows service access with just two 5mm hex keys, great for quick cartridge bearing replacements.

So far the potential luxury cyclist has only spent, what, $4,200 for the bike? And $2,200 on the wheels? Peanuts. Why not add a CeramicSpeed Oversized Pulley Wheel System to your SRAM/Shimano/Campy rear derailer for a mere $500? The oversized pulley wheels not only outlast the stock componentry, but they provide enough of an efficiency gain to power a light bulb — over the long haul, maybe.

But wait, there’s more: if the would-be deluxe rider wants to stay atop the trends, FSA’s K Force WE groupset will replace the stock shifting bits quite nicely. Although when the smallest chainring is 34T and the largest cog is 28T, it’s best for flatlands. Set to release in May, the $2,800 drivetrain allegedly features the crispest gear changes under load in the business, thanks in part to a front derailer servo that’s so strong FSA had to reinforce the chainrings to keep them from flexing. The derailers connect to each other by a seat tube battery and communicate with the shifters wirelessly, allowing a clean, cable-free cockpit as well as normal-looking brake hoods on the hydraulic brake version. Speaking of brakes, those who still use their rims to stop will be happy to know the redesigned K Force brake calipers can fit up to a 32mm tire. 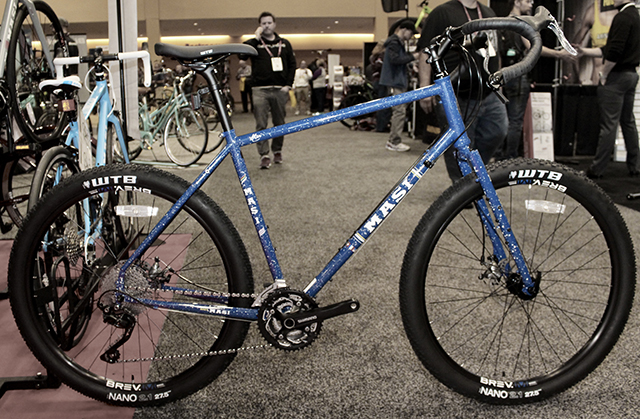 Day 8 of your Mad Max: Fury Road Ride, and the post-apocalyptic salt flats you chose to tour go on endlessly in every direction. The desiccated husks that used to be your fellow riders roll off in the wind like dead leaves. But you? You’re fine, because you’re riding Masi’s Giramondo 27.5. Designed to fit seven bottle cages (three on the frame, four on the fork), the Giramondo will keep the desert rider upright and wet when the rest of the crew has resorted to divining rods.

At CABDA, we asked Masi North America’s president what the fasteners on either side of the fork crown top are for. “They’re for whatever you want,” he said. Far out, man. Nobody ever said no to more attachment options. 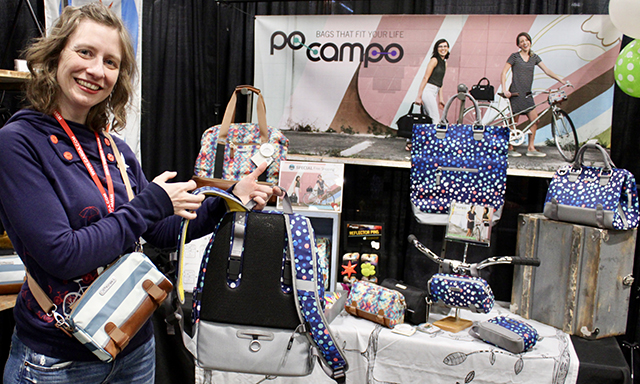 In response to the growing popularity of adventure riding and randonneuring, Ortlieb expanded its “Bikepacking” line with smaller frame, seat, and handlebar packs. People who ride brifters will like the new, svelte handlebar pack, which won’t interfere with sweeping shifts as much as the wider model from previous years. CABDA also saw the debut of colors and graphics in both the PVC-Free line and the rear panniers line. Orlieb will also allow customers to buy one pannier at a time, giving people the option to mix and match the new patterns.

Chicago’s own Po Campo caters to the style-savvy cyclist by disguising panniers to look like purses, gym bags, and other everyday carriers. New for 2018, Po Campo’s CEO designed one of the market’s few good-looking backpack-cum-panniers that’s as comfortable as it is useful. By using embedded magnets, the rack straps all but disappear while in backpack mode, but in pannier mode a chest buckle keeps the back straps out of the wheels. All Po Campo packs use waterproof fabrics and are reasonably priced. Native Chicagoans and other city dwellers who use Divvy or any of Motivate’s bike share bikes will also like that Po Campo makes a bag that fits perfectly in the front rack. 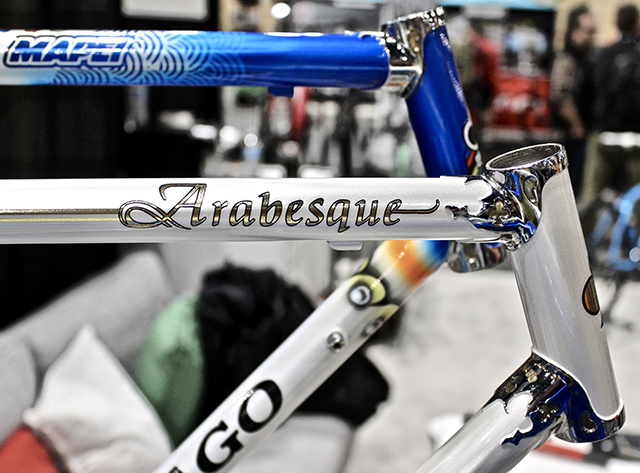 Chicago was the first American city to see Colnago’s flagship racing frame, the C64, on public display. The version on exhibit, with Campy Super Record shifty things and Campy Bora wheels, is nearly identical to the bike Fabio Aru will ride for his UAE Team Emirates grand tour bids.

In Colnago news from the 1980s, a box of Arabesque lugs that had been lost somewhere in the factory was recently recovered. Whew! Colnago will continue to produce limited edition Arabesque frames with the updated star-shaped tubing from their “Master” line until the lug box is empty. MSRP: $3,800, frame and fork only. 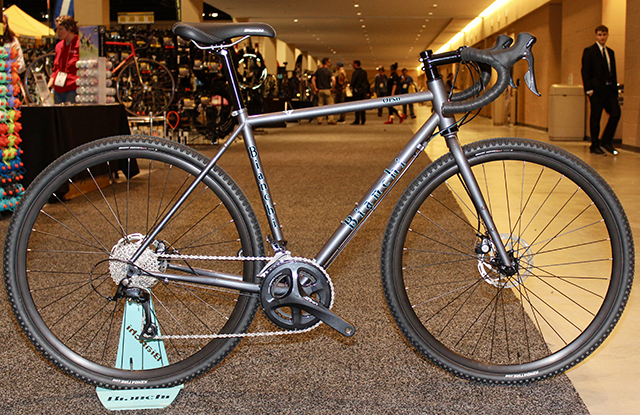 The fat-tire road bike trend is officially mainstream. CABDA saw steel, aluminum, and carbon fiber adventure bikes (with front and rear rack mounts and touring geometry) from Van Dessel, Niner, Jamis, Norco, Masi, Bianchi, and others. Van Dessel swings hard in the adventure bike category with a new Whisky Tango Foxtrot with Reynolds 853 steel, plus a new aluminum friend in Country Road Bob. Bianchi expanded its touring options with the Orso, which is similar to the old Volpe Disc, but with more relaxed geometry. Jamis expanded its Renegade line by including a steel version to pair with its carbon and aluminum offerings, and Niner, who’s had adventure bikes in all three major frame materials for some time now, report that the strongest sales in the company come from its adventure road bike line. After finishing second to road race bikes for decades, touring and adventure bikes have swept the market, and all sources point to a strong future.

Efficient Velo Tools: Putting Your Mechanic’s Chiropractor Out of Business

There’s less need to unload your heavy touring rig before working on it when your mechanic has EVT’s lift-assist stand. By using counterweights hidden in the stand’s column, the mechanic can clamp the bike on the ground and lift it to eye level without breaking a sweat (or a vertebra). All EVT tools represent the pinnacle of bike tool design and are made of heritage-quality materials so a service center can pass their tools down for generations. 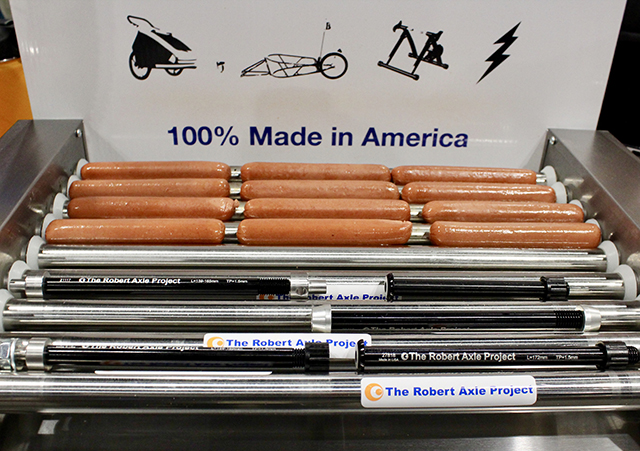 The picture says it all.