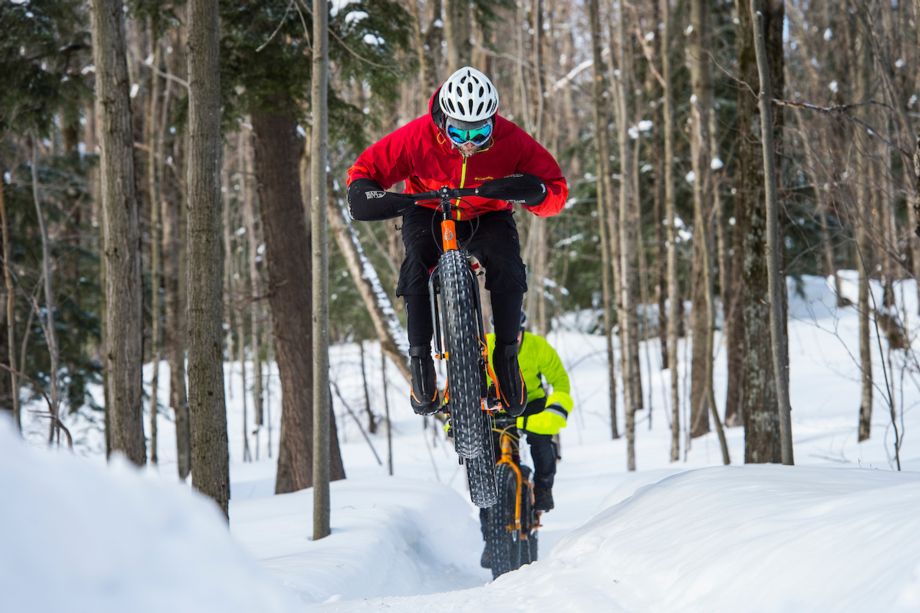 Let’s be honest here. Michigan’s Upper Peninsula is not most cyclists’ idea of a winter getaway destination. But that’s exactly where I headed in early February. As I added layer after layer of insulation to my suitcase, I laughed at the fact that I was leaving a 50-degree day on Colorado’s Front Range for some fun in weather that topped out in the mid-teens. But the invitation to ride fat bikes, give ice fishing a go, and sample local beer in Marquette was irresistible for this Midwestern boy.

Situated on the shores of Lake Superior, Marquette has attracted summer travelers for years. Its place as a winter destination is more recent. But thanks to its hearty residents, it now finds itself welcoming avid cyclists, fishermen, hunters, and skiers. After smooth travel through Chicago, I landed at Sawyer International Airport, a decommissioned Air Force base that acts as Marquette’s expanding airport. Joined by two other cycling journalists, Travel Marquette’s Candy Fletcher greeted us at baggage claim and drove us into town. A few beers later, my bed called my name. 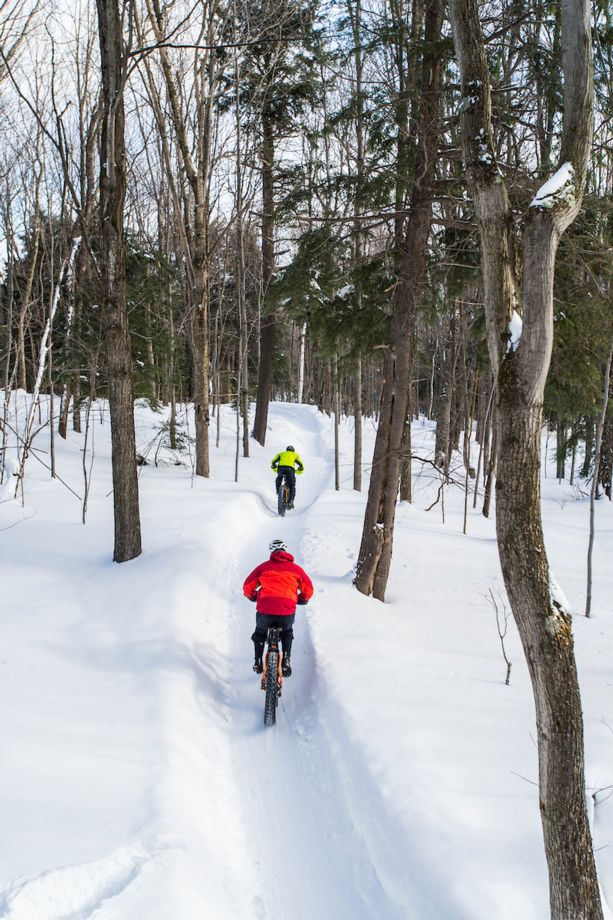 That night, snow began falling, and in a big way. The next morning we rose to a thick new coating of the white stuff and limited visibility of Lake Superior. Together we headed to Donckers, a main street café and chocolate shop that has hosted some illustrious guests, including former President Barack Obama. The food was fantastic and so was the setting. We were joined by Aaron Peterson, a local videographer and photographer who, with the help of Travel Marquette and Salsa Cycles, produced a film about fat biking in town called “Cold Rolled.” It highlights the surprising winter possibilities aboard two wheels in the area. Peterson’s passion for the outdoor life in the Upper Peninsula was obvious and extends well beyond just cycling, as indicated by the vintage, orange hunting cap he inherited from his grandfather.

Tyler Gauthier also chowed down with us. He was there as our guide that day and answered questions about the area’s increasing popularity for winter sports. Gauthier heads the grooming of one section of the area’s trails, using a two-wheel drive motorcycle that pulls a weighted car tire to produce a frozen singletrack riding experience. He puts in long, frigid hours, sometimes at night, in his efforts to establish Marquette as a fat bike mecca.

With bellies full and snow still falling outside, we headed to Harlow Lake outside of town. Along the way we stopped at the eclectic Phil’s 550 Store, a convenience/party shop with an ever-changing marquee that read “Education is important, but beer is importanter” that day. We were there for fishing licenses.

At the lake, we joined a local group ride up a winding, wooded trail to a rock outcropping. It was slow, slippery going but fun nonetheless. Mother Nature didn’t smile on us, denying us views of Lake Superior despite the fact that we could hear its waves crashing below. Turning around we made our way down and played in the deep, loose snow, eventually heading back to a small cabin where we changed into dry clothes. Food, beer, and fires brought additional comfort.

We finished our day outside ice fishing, stoking the fire, and hanging out with a great bunch of people who work hard to build and maintain mountain bike trails year round. All the while, snow continued to fall. 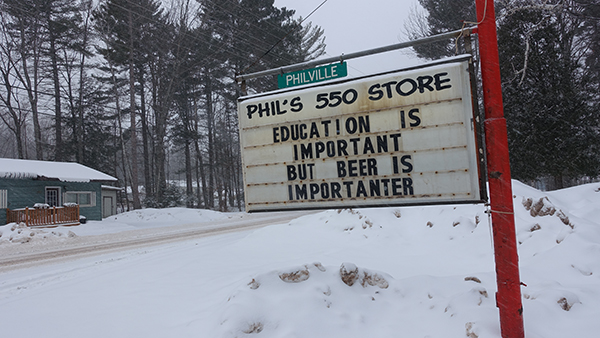 Later that night, after showers and a nice meal at a local restaurant, we found ourselves at Blackrocks Brewery, a supporter of local trails through the sales of its 51K IPA. Sipping a delicious coconut brown ale (not a hops guy), bathed in warm light, ears treated to the sounds of a local blues band, I was a tired but happy man. I had spent the entire day outside and met some truly inspiring people.

One of them was Dr. Peter Zenti, an emergency room physician who moved to Marquette from northern Wisconsin after he retired. He fills his time building trails and grooming them during winter months. One notable section goes through an ice cave with a frozen waterfall at its side. He also plays music at a local speakeasy on a weekly basis. During our conversation, Zenti periodically excused himself to take a call from one of his buddies who was out grooming in near blizzard-like conditions. 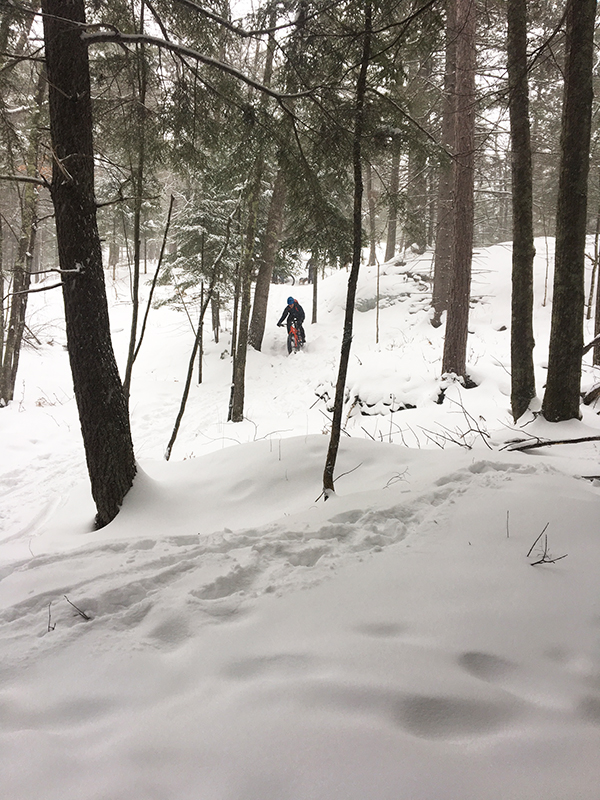 As the snow continued to fall, the reality of our fat biking situation became obvious. With such heavy precipitation, riding on perfectly groomed trails wasn’t going to happen the following day. It takes time for snow to naturally pack before it can be groomed properly. Riding in deep powder is less than fun and usually devolves into taking your bike for a hike. So we settled in with another round and continued our discussions with local trail builders on how Marquette has created such unique fat biking opportunities.

Through trial and error, sheer physical labor, and some clever engineering, the trail groomers in Marquette have taken the time to discover the nuances of riding on packed snow. And instead of painting all their trails with a single brush, they adopt different techniques so that the trails can welcome new riders while still challenging experienced fat bikers. Perfectly manicured corduroy for fast rolling fun in one trail system doesn’t mean that another area can’t offer narrow, off-kilter singletrack ribbons of white. These fat bike philosophers bring all their disparate personalities and riding proclivities to bear on a wide variety of winter riding experiences. They have learned to embrace those differences and made Marquette a must-visit winter destination.

Nick Legan is the Technical Editor of Adventure Cyclist and an Indiana native.