The Trials and Trails of Duluth, Minnesota 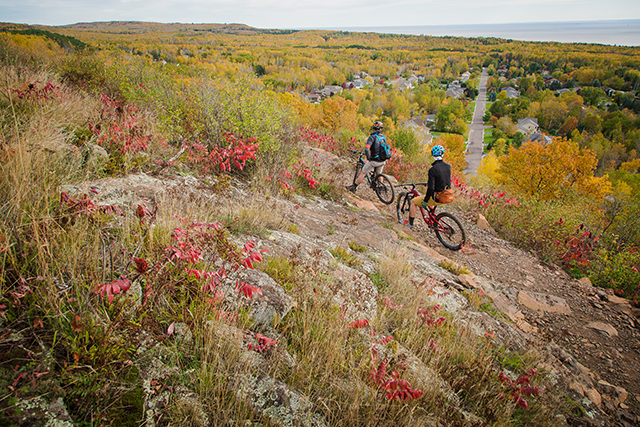 Editor’s Note: See “On the Shores of the Gitchee Gami: Exploring Northern Minnesota on Two Wheels” in the April issue of Adventure Cyclist.

When someone mentions Minnesota, the first thing you think about probably isn’t mountain biking. Lakes? Mosquitos? Prince, or The Artist Formerly Known As? Sure. But miles and miles of tight, twisty, technical singletrack? No way. Not in a state as flat as a pancake.

In point of fact, Minnesota is not completely flat, although we do love pancakes. Like a lot of places without much elevation, trail builders in Minnesota have learned to do a lot with a little. And Duluth, the port town on the shores of Lake Superior, has a lot more than a little.

Like a lot of industrial towns, Duluth has experienced booms and busts. Shipping taconite ore from the mines just up the shore — there’s a reason it’s called the Iron Range — was for decades Duluth’s major industry, and during wartime business was booming. But eventually domestic steel production took a dive, which put a big dent in Duluth’s economy. Things were so bad in the 1980s that someone put up a billboard on the way out of town that read, “Will the last person leaving Duluth please turn out the light.”

Since then, several fronts have opened up to bring Duluth back from the brink. The University of Minnesota-Duluth and the private College of St. Scholastica provide the city with an influx of young, new residents every year. Duluth also has two hospitals — St. Luke’s and St. Mary’s — and Cirrus Aviation’s headquarters is located near the Duluth International Airport. Their planes have parachutes for the planes. How cool is that! 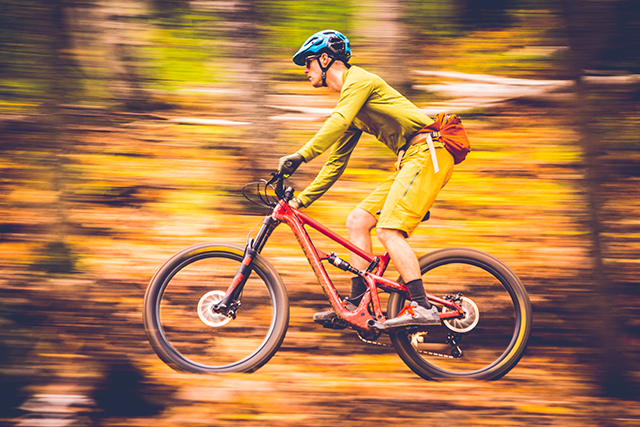 But recently Duluth has hung its hat on outdoor recreation to boost its economy and entice young professionals to its shores. “It wasn’t long ago that Duluth was dismissed as another has-been rust belt town with miserable weather,” said Waylon Munch, the board chairperson of Cyclists of the Gitchee Gumee Shores (COGGS), Duluth’s local cycling club. “Today, that script is changing: the trails and emphasis on outdoor recreation has people excited again about what our city has to offer.”

Beginning with former Mayor Donnie Ness and continuing with current Mayor Emily Larson, Duluth has shoveled piles of money into various outdoor recreation projects, with cycling just one aspect of many. You can cross-country ski in Chester Bowl, go bouldering in Piedmont, kayak whitewater in one of the dozens of tributaries flowing into Lake Superior, fat bike on groomed trails, hike the Superior Trail, snowshoe, hunt, fish, and on and on. Heck, there are even loonies who surf the waves of Lake Superior in the winter. In the winter.

Creating one of the country’s best adventure towns takes more than just redirecting tax dollars, though. You need buy-in from the city, support from the community and local businesses, and a robust, enthusiastic volunteer force. Lucky for Duluth, it’s got all three in spades.

The project that best illustrates how a midwest industrial town can change its identity is the Duluth Traverse.

“[The Duluth Traverse] started as an idea to follow a natural ridgeline that spans our 26-mile-long city, with trail networks that spread to every neighborhood in Duluth,” said Pam Schmitt, the fundraising director for COGGS. “Every person in our city is within minutes of a trail system. This is not only to give people access, but also to preserve our abundant green spaces from being developed.” 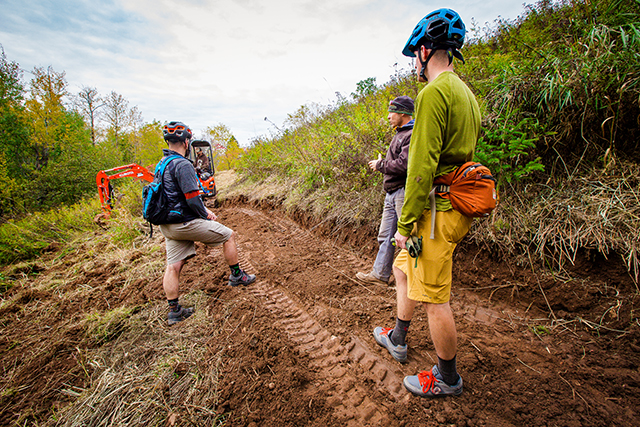 According to the COGGS website, the Duluth Traverse is “a multiuse singletrack trail that is purpose-built for mountain biking and completely traverses the entire length of the city of Duluth.” The Duluth Traverse is designed to be a beginner-level trail connecting all of Duluth’s trail centers. The end goal is to be able to ride from one end of town to the other, all on singletrack.

Duluth has several different trail centers scattered across the city, all with professionally built trails of varying difficulty from beginner to expert. According to Munch, there are currently 89 miles of trail within city limits. That’s a lot of urban singletrack! But it wasn’t always like that.

“When I was a teenager, I did quite a bit of mountain biking with my buddies,” said Dave Grandmaison, cofounder of The Duluth Experience, a local tour provider. “Duluth trails were different then. We didn’t have purpose-built singletrack ... instead, we sloshed through the mud, rode horse and ATV trails, and bushwhacked our routes.”

Munch said that, in the last decade or so, COGGS has taken on the role of Duluth’s trail steward — maintaining trails, building new trails, and coordinating with the city and volunteers on trail development.

“There has been a three-pronged approach to the trail development happening in Duluth currently,” said Munch. “One, the COGGS Trail Crew: this is a crew of four seasonal employees that works for our organization, funded by private donations, corporate sponsors, event proceeds, etc. Two, contractors hired by the City of Duluth: these contractors are funded by grants that have been awarded to the city. COGGS and city staff work together to submit grant applications, with the city ultimately being awarded the money. These grants are typically matched to some extent with money that the city has allocated to outdoor recreation projects across town. Three, the good old-fashioned way: volunteers. Throughout the summer and fall, COGGS organizes three to five volunteer trail work outings per week at various parks and trails across town.” 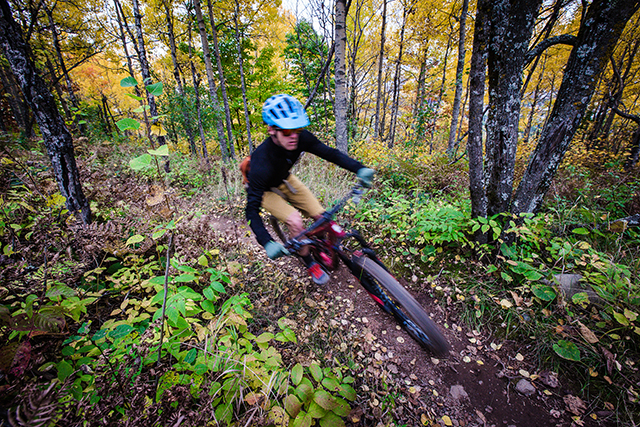 According to Munch, COGGS currently has 650 paying members and logs about 5,000 volunteer hours every year.

When riding the Duluth Traverse, it’s hard not to see the community love and respect for the trails, and for the hard work put into them. The trails are lovingly crafted, and have a very different character depending on what part of town you’re in. There’s even a system in place for keeping riders off trails when they’re waterlogged. Riders can check COGGS’s Twitter account for updates, and many of the trailside maps include a QR code you can scan with your phone to see whether the trail is open.

Some of the more serious trails, like in Piedmont, are directional and bike-only. But the vast majority is open to all trail users, which makes for an egalitarian trail experience. Less experienced riders who want to enjoy the trails with the benefit of a guide can join the Duluth Traverse Adventure, a day tour offered by The Duluth Experience. Rolling up to the trailhead and seeing all manner of users — cyclists, hikers, dog walkers, families with young children, teenagers on their shred machines — and passing people on the trail, with nothing but polite, friendly encounters, it’s clear that the community is embracing the trails.

“It’s been really fun to watch the trails expand,” said Munch, “but even more so to see how many new faces are getting out there.”

It’s clear to enthusiasts like me that having more and better opportunities for outdoor recreation is a virtue unto itself, but the people holding the purse strings like to see real, concrete results. Are the trails drawing more visitors? More residents? More jobs? From my own subjective experience, Duluth has changed a lot in the last decade. There’s new housing everywhere, more breweries, more restaurants, and many of the poorer neighborhoods I remember in West Duluth are being revitalized.

“There is a renaissance happening in this town,” said Schmitt. “People are excited and proud of the community. College students are sticking around, employers are attracting national talent and touting us a destination home base. The music, restaurant, job, housing scenes are all booming.”

Dan Meyer is the Staff Writer at Adventure Cyclist.