From the Magazine: The Right Stuff 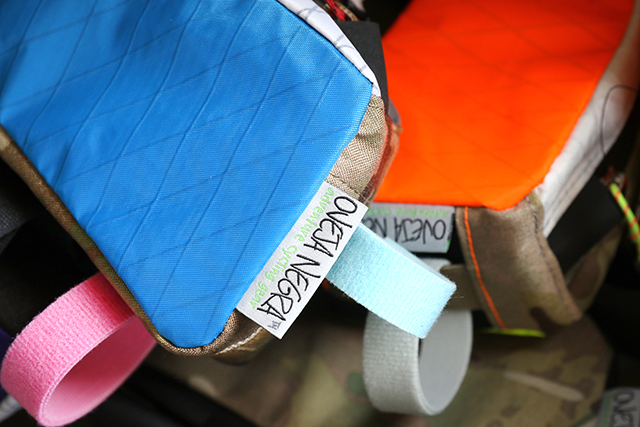 This feature originally appeared in the August/September 2018 issue of Adventure Cyclist magazine. To receive a year subscription as well as a host of other benefits, join Adventure Cycling today.

Story and photos by Nathan Ward

A stone’s throw from the rushing Arkansas River in Salida, Colorado, sits an old yellowed stucco building. The architectural details and windows were covered up long ago as the building lay silent while locals whispered about its sordid history. In its past life as the Laura Evens Parlor House, the building harbored the famed madam and her working girls as one of the last operating brothels in the state.

When the city of Salida closed it down in 1950, the building slid into disuse, and no one was seen going in or out for years. Then, one day, the windows were opened, the door flung wide, and music drifted out. Stepping through the door, all the trappings of the building’s former life were gone except for faded flowery wallpaper — no waiting room, no ornate bar, no collections of bearskins tacked to the wall. In its place was a sunlit workshop filled with whirring sewing machines, rolls of bright fabric, and bikepacking bags stacked in piles. The old cathouse was reborn as the new manufacturing home of Oveja Negra bikepacking bags. 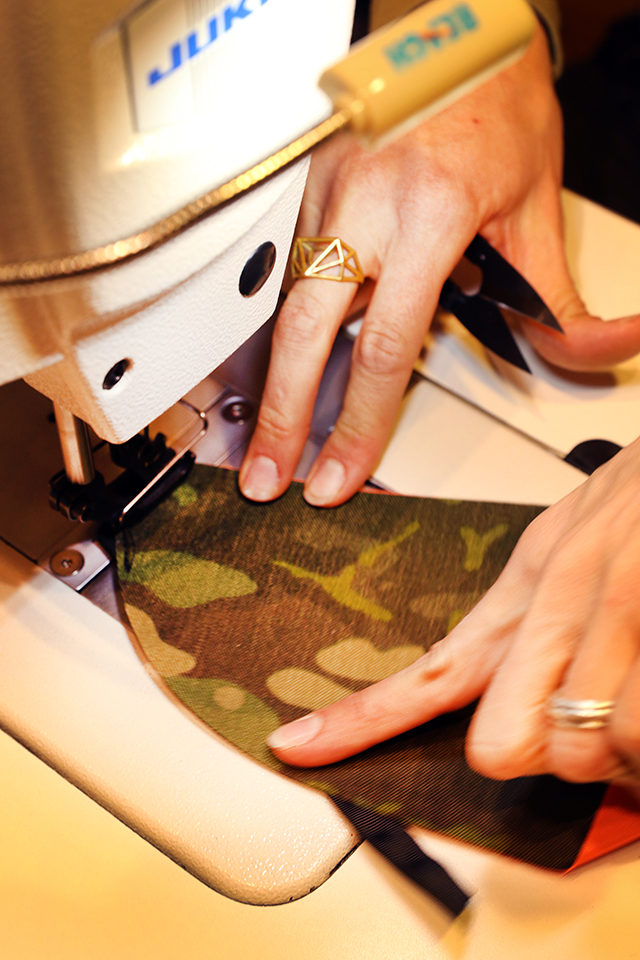 The scene still feels eclectic — a deer head adorns a wall near a reclining mannequin in sequins, music pumps through the room, the hot water kettle is flanked by herbal tea and whiskey, a new mountain bike frame hangs half-built in the corner, and bike bags lie everywhere. They’re sorted by type in boxes and lined up in an orderly fashion in various stages of construction. Fit-looking people are sewing fast, laughing, and chatting. It feels like a fun place to work.

Oveja Negra was founded  in 2012 by Lane and Monty Willson, not in Salida but 60 miles north in Leadville, the highest-altitude city in the U.S. (10,152 feet). It’s a gritty mountain town that feels rough around the edges, endures a significant winter, supports a young group of outdoor athletes, and is home to one of the most famous mountain bike races in the world, the Leadville 100. It was the perfect incubator for a bike business like Oveja Negra.

In 2010, Monty had recently returned from a three-month bicycle tour in Patagonia, riding from Ushuaia to Bariloche with a loaded touring bike weighing between 80 and 100 pounds including food, water, and fuel. “I definitely recognized the benefits of finding a lighter way to bike tour,” said Monty.

At the same time, Lane was already sewing full time for an outdoor clothing company. “I’ve been sewing since childhood. It was my art form,” Lane said. “My mom taught me to sew by hand, but I’d sneak the sewing machine out of the closet when she wasn’t home. When I went away to school, I stole the machine, and my mom didn’t even notice it was gone.” In college, Lane discovered she possessed a love for sewing and put it to use making clothes, repairs, alterations, and fun things like full-size dancing bear costumes for Grateful Dead shows.

After their eyes met across the room at a Cinco de Mayo party, Monty and Lane fell in love, moved in together, and soon put their sociology and history degrees to use making bike bags. Lane was a seamstress who wanted to mountain bike. Monty was a cyclist who wanted to sew. It was a perfect synthesis of personality, place, and project.

“We found our first industrial sewing machine for sale online for $200,” said Monty. “It was a super deal.” They set up shop on the kitchen table and started stitching. They first created a full framebag, then top tube bags. “We got busy immediately. At the time, the few companies making bikepacking bags were getting out of business so people couldn’t even get bags,” Monty said.

In 2013, they expanded into a 250-square-foot shop outside the house but still kept the kitchen workshop going. After the brutal winter of 2012–13 when snowfall smothered Leadville, growing so deep the snow covered the first-story windows of their house, Lane and Monty decided to move Oveja Negra south. “We love Leadville,” said Lane, “but we had an infant by then, and it was just too much.” They chose the sun, warmer weather, and weaker winters of Salida, a few miles south but still in the upper Arkansas River valley. 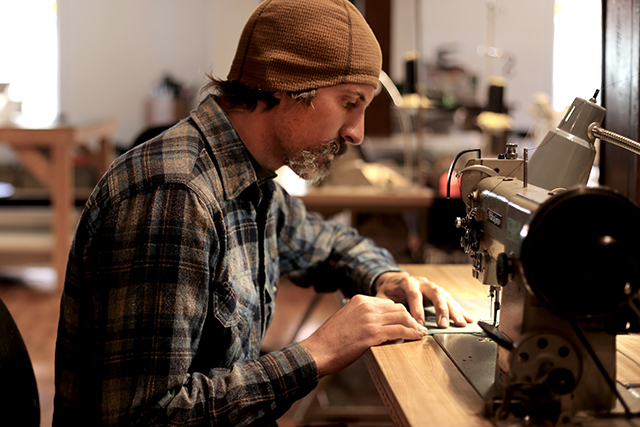 Oveja Negra continued to grow as they upgraded to bigger and bigger workshops, culminating in the 2,000-square-foot former parlor house. Lane runs the finances, day-to-day operations, employees, and customer relations. Monty focuses on design changes and new bags, marketing, and maintaining their fleet of industrial sewing machines. “Even though I don’t sew many days now, I still totally geek out on the sewing machines,” said Monty. “We love this work!” Lane said. “We don’t leave the work behind when we leave the shop. It’s all-encompassing.”

Lane and Monty are just the kind of people you hope move to your town. They’re energetic, friendly, and glow with positive energy. Businesses like Oveja Negra provide exactly the kind of growth mountain towns like Salida need. Bikepacking bags provide jobs for skilled workers and a living wage in an area where prices are skyrocketing and hands-on jobs, other than construction, are hard to find. “We like being able to employ people in a small, rural community that lacks manufacturing jobs,” said Monty. Today Oveja Negra employs 10 people in addition to Lane and Monty, six part time and four full time.

In addition to providing jobs, Oveja Negra strives to be a responsible business. Approximately 90 percent of their materials is sourced in the U.S. Local and small also means Oveja Negra stays nimble. “We’re small enough that we can change colors and make new products quickly,” said Monty, “because everything is made here.”

This ability to create, move, and improve bikepacking bags swiftly gives them an edge over manufacturers who produce large quantities overseas. “We fix problems almost immediately,” said Monty. “And we constantly evolve the products to make the best bags we can.” This fluid workflow may be crucial to their long-term success now that many companies have moved into the bikepacking space, creating lots of competition. Although the market has changed, it’s also now bigger and busier. Bikepacking is no longer as niche and obscure as it was just a few years ago. “It would be much harder to get into this business today, compared to when we started,” Monty said.

While Monty obsesses about perfecting the designs and production process, Lane’s overflowing energy certainly fuels the stoke around Oveja Negra. “Whether they want a simple snack pack or a full setup to bikepack all the way across Europe, we’ve got it covered,” said Lane. “We love our cyclists and love hearing about all their travels. We’re happy helping people get into nature and adventure to enjoy life more.”

Their bags have been strapped to bikes pedaled to all corners of planet Earth over the last six years. “We’ve received lots of letters and love from our customers out on the road,” said Lane. They try to bring the adventure home to the shop too. “Last year one of our employees, rode the American Trail Race, and it was so cool because the route came through Salida,” said Lane.

In addition to their current line of bikepacking bags, Oveja Negra has several new “secret” bags in the works. Recently they started selling a rolltop backpack and the Bootlegger, a direct-mount fork bag. They also introduced Wack Packs, wildly colorful bags made from fabric scraps.

As a cyclist, it’s fun to join in the positive energy and vision of Oveja Negra. Everyone seems stoked. Recently Lane and some of the sewing crew were reading a book by writer Tracy Beach that detailed the life of Madam Laura Evens. “We had a few spooky moments here so we figured we needed to learn about the girls who worked here,” said Lane, opening her eyes wide. What spooked them? “Oh, some of us have had ghostly hugs while working, feelings that arms are wrapping around us, and one of the old working girls keeps locking the front door while we are here working, just a few feet away.”

Monty and Lane continue to bike tour when they can get away from their business, and Monty recently bikepacked 500-plus miles on the Idaho Hot Springs Route.

Currently 40 to 50 bike shops carry Oveja Negra bags. “Cycles of Life in Leadville was the first shop to carry our bags,” said Lane. “Subculture Cyclery just down the block in Salida was the second.” For the most fun experience, visit their shop in person, rock out, and enjoy an herbal tea or an after-hours whiskey. You might even be lucky enough to get a ghostly hug to go along with your new bikepacking setup.

Nathan Ward is a writer/photographer/filmmaker who first wrote for Adventure Cyclist over 20 years ago. He got into bikepacking before there were bags, just bungee cords and drybags. Today he has a child so he tours with the most gear and shortest days possible. nathanward.com