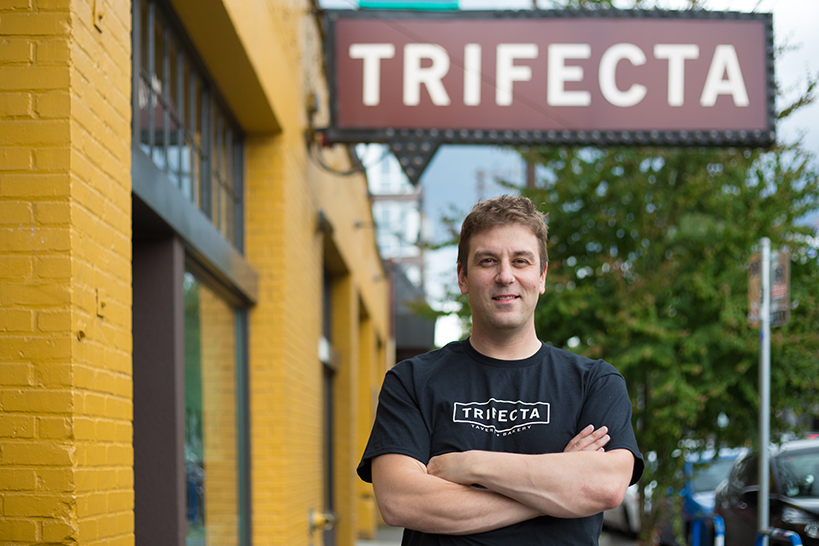 This wasn’t your usual supported century ride with its warm bananas, hard-boiled eggs, and granola bars scattered on a folding table. It was the (now dormant) Gourmet Century: a 350-person, food-centered metric century through the West Hills of Portland, Oregon, put on by Chris King Precision Components. King, known for both his U.S.-made craftsmanship and gourmet proclivities, aspired to create the perfect day on a bike and to share his culinary passions with guests.

Riders can thank Portland chef and cyclist Chris DiMinno for the standard of superior cuisine. In 2013, DiMinno helped take the Gourmet Century to the next epicurean level. Instead of tapping the Chris King staff to work the century, DiMinno brought in guest chefs to be in charge of different courses and rest stops.

“The Gourmet Centuries would sell out in hours, and we only advertised through social media,” said King, who notes that liver mousse is a near-perfect recovery food. “People from Germany, the UK, Italy, Japan, and all over the U.S. would come for the ride. Our demographic migrated from route-focused century riders to weekend adventurers into food.”

DiMinno spent three years working full time for King as chef, event coordinator, and caterer for hire. He integrated food into the company’s programming and took the Gourmet Century to Bend, Oregon, as well as Sonoma, California, and Nagoya, Japan. He traveled 36 weeks per year catering trade shows, cooking for cycling teams as they raced, and cheffing for the Rapha Continental ride.

“A chef for a bike components company? People couldn’t wrap their heads around what I did, even the employees,” DiMinno said. “I never quite got the language together to explain it either.”

Nonetheless, this niche job tightened the link of the Chris King brand to the foodie culture and finally tied together two major threads in DiMinno’s life: cycling and cooking.

DiMinno’s affinity for cycling began in 1997 at age 13. He scraped together his cash and walked into Julio Bicycles in Chappaqua, New York, where he ogled and then bought the Gary Fisher Big Sur mountain bike with white tires. Thus began a life of mountain biking, wrenching for a bike shop, downhill racing, and trials.

The same year he bought his first mountain bike, he stirred chocolate chips into gooey vanilla batter for the first time ever by himself. Something clicked. He knew he wanted to be a chef. Not two years later, DiMinno got a summer job working in Manhattan at Le Madeleine, a French bistro in the heart of the theater district, and right after high school, he attended the Culinary Institute of America in Hyde Park, New York.

After school, DiMinno cut his teeth at upscale New York City restaurants like ’Cesca and Telepan and the famous Blue Hill at Stone Barns in Pocantico Hills, New York. (DiMinno commuted on a dirt jump bike through Manhattan.) Immersed in the kitchen, Chris learned to work hard, then harder. The goal: impeccability. Once the executive chef told him to go home during a shift because he undercooked a quince.

“I remember serving a course with one lone carrot on a plate,” said DiMinno. “And it was spectacular.”

In 2009, DiMinno wanted a change of scene and landed in Portland, just as the burgeoning food and restaurant scene was taking off. Clyde Common, a downtown restaurant known for its cocktails and creative fusion of domestic and international fare, immediately hired DiMinno as a sous chef. Eight months later, he became the executive chef.

While busy at Clyde Common, he continued to commute by bike and started road riding for the first time. He fell in easily with Portland’s spirited bike scene. DiMinno’s unique combination of being a top-tier chef and cyclist led to his job at Chris King.

During his tenure at Chris King, DiMinno catered the very first Trans-Cascadia, a four-day blind-format mountain bike race in the Oregon wilderness. For six days, DiMinno and a meager three-member crew cooked three gourmet meals a day plus snacks for people who spent the whole day shredding primitive singletrack.

But feeding mountain bike racers in the woods came with a sharp learning curve for DiMinno. After his first 24 hours in the woods, DiMinno looked out over the mud-splattered riders devouring his buffet like locusts. Then he looked at his almost bare coolers and his staff rushing around. The one lone carrot gambit would not work with these folks.

“We ran out of all the food that I’d bought for the entire event in a day and a half,” said DiMinno. “The lesson: mountain bikers don’t eat like roadies who are on some sort of calorie-counting food plan.”

DiMinno had to drive down from the mountains to do another gigantic shopping trip. At the next year’s Trans-Cascadia, DiMinno brought more staff and a freezer truck brimming with food.

“Chris tapped us into a community of chefs who would cook for this type of event on site,” said Gibson. “You could even say he helped cultivate a group of willing chefs.”

In 2016, DiMinno left his job at Chris King and is now the executive chef at Trifecta in Portland. When he left, the Gourmet Century went into hibernation and the sun set on a bike/food renaissance of sorts for the moment.

Until then, we can thank DiMinno (and Chris King) for further defining, growing, and evolving the intersection of cycling and the culinary arts. Copycat rides have sprung up, and businesses in the industry are hiring chefs for their events.

Ellee Thalheimer is a freelance writer and author from Portland, Oregon.

Recipes for the campground

Grilled chicken tacos – in the style of the Gourmet Century

2 ears corn, in the husk

Set up your grill and light your campfire.  It's better to do this over open wood than a camp stove.

When the grill is hot, place marinated chicken thighs and roast until cooked through.  Don’t over-char.  While the chicken is cooking, on another part of the grill lay the corn down and roast until the outside is charred and then remove it from the heat.

When the chicken is cooked through, allow it to rest for at least 10 mins, then slice into bite-sized pieces and set them aside.

When the corn has cooled, remove the husk and use a sharp knife to cut the kernels off the cob.  Place them in a bowl and mix with 2T extra virgin olive oil , juice of two limes, avocado, cilantro leaves, and red onion.  Season to taste with salt and pepper and allow to marinade.

To assemble the tacos,  wrap the tortillas in aluminum foil and allow to heat on the grill.  When they are warm, fill the tortillas with some of the chicken, some of the avocado-corn salad, and finish with salsa.  Eat immediately!

(In this particular recipe, you can make the romesco in advance, bag it, freeze it and utilize it as an ice pack for a short time if it's hot until you get to your destination.)

Grill the piquillo peppers until they are slightly charred.  Set aside and allow to cool.  When cool, combine all of the ingredients in a food processor and chop until smooth.  Season and refrigerate.  When cold, store in a vacuum sealed bag or ziplock.

For the spring onions:

Wash the onions very well and dry on paper towels.  In a large bowl, add the onions and season liberally with salt, pepper, and extra virgin olive oil.

Take two layers of aluminum foil, and lay the onions out evenly.  Fold the layers over to form a tightly sealed package. Place the aluminum foil packs in ziplock bags and set aside.

Get the campfire going to grill. Season your beef with salt and pepper, and cook until your desired doneness.  While your beef is cooking, directly put your onion packs into the coals of the fire.  Cook until the onions are charred on the outside and tender on the inside.  Remove your onions from the foil, and serve alongside the beef and the room temperature romesco.

Ad 1 – to be really cool, finish your entire dish with some of that really good extra virgin olive oil and really good flake salt, like Maldon.

Ad 2 – If you really know what you're doing, this dish also goes very well with wild mushrooms, that can be roasted in the coals in the same fashion as the onions.  Depending on your location and the season, morels, chanterelles, black trumpet and porcini can grow like crazy.  Please be careful with this one, and consult an expert if you are at all unsure of mushroom identification.

Salt and pepper, to taste

In a large bowl, toss the nuts and seeds with salt, pepper and extra virgin olive oil.  Pour out the mixture onto a cookie sheet and place it in a 350 degree oven for about 5 mins.

Remove the nuts and seeds from the oven and sprinkle with the chopped herbs and the honey. Place back in the oven for another five minutes, or until nuts become crunchy, not soft on the outside, with a developed nutty flavor.

Afterwards, pour the nuts into a large bowl. Toss again to uniformly coat them with the herbs and honey, and set them aside to cool.  When cool, store them in an airtight container.  These will stay good for a number of days. Eat them before, during or after your ride.